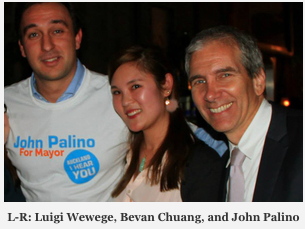 A recent poll has added to Auckland mayor, Len Brown’s problems. Horizon Research recently  revealed that the incumbent, Len Brown, has a serious challenger in the form of current Labour MP, Phil Goff;

Former Labour leader and cabinet minister Phil Goff is a clear front runner in results of a poll on who would receive most current and potential support if they were to run for the Auckland Mayoralty in 2016.

A Horizon Research poll of Auckland Council area residents conducted between 19 and 26 March 2015 finds Mr Goff, the MP for Mt Roskill, has 20% support of all respondents if he were to become a Mayoral candidate.

Runners-up in the poll were CEO for Auckland Chamber of Commerce, Michael Barnett, at 5%; National MP for Pakuranga, Maurice Williamson at 6%;  current right-wing councillor Cameron Brewer at 5%; and Deputy Mayor Penny Hulse, at 4%.

One year ago, on 20 March 2014, the Herald published a more scientific survey which also gave bad news for any future Len Brown mayoral-candidacy.

The results were again less than encouraging for Brown;

Interestingly, the beneficiary of any anti-Brown voter-sentiment would appear to be another “left-leaning” candidate (Goff), and not his previous electoral rival, John Banks.

Despite his initial conviction, for filing a false electoral return for his failed 2010 mayoral  campaign, being quashed by the Court of Appeal in 2014, public perception of Banks’ lack of judgement may weigh against him for any political come-back. The ex-National MP; ex-ACT MP; and ex-Mayor is seen as too “accident”-prone to be considered a viable alternative to Len Brown.

Banks’ re-trial – set for 6 July this year – is by no means a guarantee that he will be found Not Guilty this time around.

Other right contenders are Maurice Williamson and John Palino – the latter implicated in  dirty dealings with a well-known right-wing blogger who ‘outed’ Brown’s affair with Auckland woman, Bevan Chuang;

Luige Wewege was closely connected with Palino’s mayoral campaign team. He was, in turn, ‘outed’ by Kiwiblogger, David Farrar, as a liar when Wewege denied in public that he himself had had a close relationship with Ms Chuang.

Wewege and Palino have burnt their political bridges in this country.

Auckland city councillor, Cameron Brewer, has also expressed a willingness to stand on a right-wing ticket. But aside from looking like a minor character who inhabits the comic-book store in the US sitcom, ‘Big Bang Theory‘, it is hard to see what he has going for him. As with Banks, Brown, and Williamson, contenders for a mayoralty require a strong, out-going personality. ‘Nuff said.

Which leaves Maurice Williamson as the most likely  right-wing adversary for a Goff tilt at the Auckland mayoralty.

Despite receiving only 14% support in the unscientific 18 March poll, support for Williamson cannot be under-estimated. His famous “Big Gay Rainbow” speech in Parliament on 17 April 2013  alone must have cemented Williamson as an inspirational beacon of hope for the LGBT community in Auckland.

With a decent campaign team and predictably plentiful donations of cash  from the business sector, Williamson could yet prove a strong adversary for Phil Goff.

One thing is for certain, as the Horizon Poll pointed out, Len Brown’s political career appears to be over;

“Indications are that 65% of ratepayers would not consider voting for Mr Brown if he were to be a candidate.”

It would be interesting to know who commissioned the poll-questioning regarding Auckland’s mayoralty.

The real question for the Left is, would a Phil Goff mayoralty be any better?

What kind of mayor does Goff want?

One who is “fiscally responsible”, he says, who “doesn’t rate people to death”, tries to do more with less, while creating a “socially inclusive city”.

Goff might as well have been standing as a card-carrying member of the ACT Party. His belated reference to “a socially inclusive city” wasn’t so much as “tacked on” as an after-thought – but stuck on with blue-tac, and liable to fall off at any moment.

As another litmus, how would Goff have handled the lockout of workers by Ports of Auckland Ltd, and the associated dirty tricks that POAL employers used against the Maritime Union?

If Goff issued any statement on the dispute, I have yet to find it.

It is that silence which I find troubling. And it is not often that I am troubled by a politician’s silence.

Fairfax media: The mayor, the love rat and nudity

Kiwiblog: Not in a relationship!

A media release I would love to see from Len Brown

Ratbags, Rightwingers, and other assorted Rogues!

I have seen one future, and it is bleak

According to David Farrar, John Key must resign!

The Daily Blog: 5 reasons why Goff will run for Auckland Mayor

The Standard: Len Brown is toast

Your NZ: Brown eased out, Goff lining up