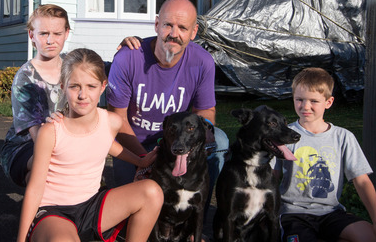 Evicted by The Block: Tenant must be out by Wednesday

Father-of-three Brad Williams is on the hunt for a new rental property after his home was bought by The Block NZ producers.

He says his large three-bedroom bungalow, which sits on a 726 sq m section on Renfrew Ave in Sandringham, was sold last month for $1.64 million and he has until next Wednesday to find a new home after he was given 21 days notice to vacate the property by his landlord.

As ironic as the 250 000  hungry NZ children living in poverty licking the TV screens while MasterChef broadcasts, this father of 3’s plight highlights the weakness of renter rights, the over heated property speculation of Auckland’s housing market and the counter productive nature of public broadcasting we now watch.

My eyes would roll if they weren’t perpetually locked into that position after National won last years election.