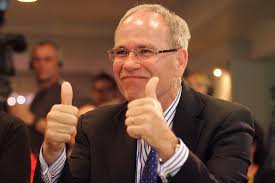 If things weren’t bad enough for Len Brown, the harbour reclamation debacle, if he does not change course, is likely to be politically fatal. There is now raw anger directed at the mayor over what he has allowed to happen. Rather than confront the Ports of Auckland directors, and instruct them to act in the public interest or else, the mayor has tried to pass the buck with the lame excuse that ‘his hands are tied’. Many will recall his similar weak performance during the industrial dispute of 2011/12.

There are two elements to the present harbour reclamation debacle – separate but inter-related.

First of all in response to a public outcry against further encroaches on the Waitemata harbour, in September 2013, the Council resolved to make further harbour reclamation ‘non complying’ in the proposed Unitary Plan. While this would not have absolutely prohibited reclamation, it would make it a public process and very difficult. Then in February this year, as the result of back room discussions with the Port company’s lawyers, council planners came back to the council and urged a back down on the non-complying position. A narrow majority of councillors, led by mayor Len Brown and deputy mayor Penny Hulse agreed to the back down. The councillors at the meeting were told by officers that the previous stance was legally undefendable and that council officers could not and would not defend it. A stunning display on insubordination. This was later revealed to be actually contrary to the legal advice the officers did have. In fact the legal advice suggested all forms of reclamation should be non-complying,

At the same time it was disclosed by the Port that they had obtained two non-notified consents from the Council for two nearly 100 metre extensions, jutting out into the stream from the Bledisloe reclamation. These were to straddle either side of a major 30,000 hectare future reclamation.

Like the legal advice the existence of these consents, granted late in 2014, were kept from the councillors and the public and it seems in order to obtain them the port company lawyers gamed a rule in the Regional Plan: Coastal enabling the repair and extension of the existing piled finger wharves within the port management area.

Thus before even the Unitary Plan submissions had been heard, Ports of Auckland were given consent for the first stage of a major two-stage reclamation. Unlike previous Port plans to infill between Fergusson and Jellicoe Wharves (equally stupid but not as damaging) this is a major extension out into the harbour stream, narrowing the harbour.   This has infuriated the yachting fraternity in particular, as it will make conditions at the harbour entrance even more dangerous than they are now.

Council staff, alleged that they had not choice as the consents were enabled in the Coastal Plan. Despite my opposition to this (or because of it), the officers added (with some relish) that of course that it was the ‘Auckland Regional Council’s coastal plan’. This refrain was taken up by deputy mayor Hulse with the same relish and now the mayor himself is using it. But what are the facts?

In 2008 the ARC notified a plan change for the Coastal Plan over the Wynyard Quarter Port Management Area (Auckland City Council ran a parallel district plan change). This was in response to an agreement between the councils to redevelop the ‘Tank Farm’ and the Wynyard Quarter. In February 2009 the Port company lawyers (led by Derek Nolan of Russell McVeagh) appealed the ARC plan change to the Environment Court. Ironically (as it turns out) the appeal claimed the ARC had made the requirements for public notification criteria for activity in the port management area too strict for the port. The litigation went on after the ARC was disbanded and into the super city. As a result of the settlement of the plan change litigation, Auckland Council updated the relevant sections of the Regional Plan: Coastal in September 2011. In other words this was on Len Brown’s watch.

Interestingly, given the mayor’s attempts to put the blame on the long-dead ARC, the section relating to notification in special circumstances survived the litigation. It reads, ‘If the written approval of Auckland City Council [now Auckland Council] is not obtained, or if in the opinion of the ARC [now Auckland Council] there are special circumstances existing in relation to the application, the application may be notified’.

So even with the dodgy move of using a section of the coastal plan designed for routine port works there was still an option to bring in the public, had the council planners wanted to. There hands were certainly not tied.

Ports made no secret that this was the first step in the plan for a major reclamation, so it is inexcusable that council planners did not take these ‘future effects’ into account, nor indeed the existence of the Hauraki Gulf Marine Park Act, to invoke the ‘special circumstances’ that would require this consent to be publicly-notified.

Nor did they take into account probably the most important ‘special circumstance’, the overwhelming public opposition to any further reclamation after a Herald campaign in early 2012 and the Council’s agreed policy response to this.

Here we have a publicly-owned port company acting like a rogue private corporate and council officers leaning over backwards to facilitate its plans by manipulating information and shutting out the public.

But this of course is exactly the way the super city was set up to operate by Rodney Hide and Steven Joyce (who was the one pulling the strings).

In other times and other cities eye-brows might have been raised at the sight of Russell McVeagh lawyer Derek Nolan, who not only represents the Port company but other big corporate interests, in 2010 sitting on the appointment panel for the critical position of Council’s ‘manager resource consents’. This took ‘Business friendly’ to new lengths but something that would once have been considered an unthinkable conflict of interest.

Resource consents are an extremely valuable property right in Auckland. As a regulator of such property rights the new Auckland Council saw no conflict of interest in it joining the NZ Property Council. Thanks to ratepayers the council pays the biggest membership subscription of this developer lobby group.

The culture of ‘business friendly’ non-notification, shutting the public out of the Resource Management Act, is deeply ingrained in the Council culture.   Whether it’s the demolition of Victorian villas in Ponsonby and Herne Bay, retrospective consents for coastal developments on Waiheke Island, consent for the cutting down of 300 year old kauri and rimu trees in the Waitakere Ranges, or major extensions of the port out into the harbour, the public is being shut out of the process. The property rights of neighbours and the civil rights of ordinary citizens are being stolen.

The future of the Resource Management Act was very much a critical sub-text to the Northland by-election. The Key government has made promises to its backers that it intends to effectively gut the RMA once and for all, to deliver the coup de grace after years of reforms designed to progressively weaken RMA as a force for environmental protection and community rights.

However when it comes to Auckland it need not bother. The way the super city operates under Brown’s and Hulse’s leadership with only about 1% of thousands of resource consents publicly notified means, in Auckland the RMA has already been gutted.

Yet the RMA is a form of social contract. Section 5 principles and purposes is centred around ‘people and communities’ and their role in the ’sustainable management of ‘natural and physical resources.’

People and communities have had a guts-full. They will not be shut out of these decisions for much longer. The trashing of the beloved Waitemata Harbour is the last straw. The people of Auckland are now at war with Len Brown’s Auckland Council. This is all going to end in tears.

Mike Lee is an Auckland Councillor and the former chairman of the Auckland Regional Council.