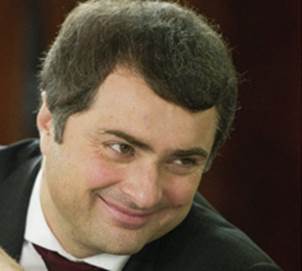 ADAM CURTIS is a documentary-maker whose work has a way of making the world look and feel completely different. The secret to the success of series as varied as Century of the Self (2002), The Power of Nightmares (2004), and his most recent work, Bitter Lake (2015), is Curtis’s ability to bring what’s been hidden in History’s shadows into the light.

The nineteenth century British Prime Minister, Benjamin Disraeli, remarked that: “The world is governed by very different personages from what is imagined by those who are not behind the scenes.” Curtis not only takes us behind the scenes, he introduces us to the personages.

The latest personage to whom Curtis’s viewers have been introduced is Vladislav Surkov – Vladimir Putin’s political impresario. In the words of Peter Pomerantsev, writing in The London Review of Books  “Surkov is the real genius of the Putin era. Understand him and you understand not only contemporary Russia but a new type of power politics, a breed of authoritarianism far subtler than the 20th-century strains.”

Surkov’s great insight into the character of the post-Soviet era was that it would be an epoch devoid of ideological conviction. A society in which all of the grand narratives of the 20th Century (from Absolutism to Socialism to Capitalism) have been tried and found wanting. A place where cynicism and irony will ride shotgun for an amoral authoritarianism whose twinned priorities of self-enrichment and self-aggrandisement recognise no limits.

It is a world that fosters in its hapless citizens feeling of vertiginous disorientation. According to Pomerantsev’s chilling description:

“[T]he stage is constantly changing: the country is a dictatorship in the morning, a democracy at lunch, an oligarchy by suppertime, while, backstage, oil companies are expropriated, journalists killed, billions siphoned away. Surkov is at the centre of the show, sponsoring nationalist skinheads one moment, backing human rights groups the next. It’s a strategy of power based on keeping any opposition there may be constantly confused, a ceaseless shape-shifting that is unstoppable because it’s indefinable.”

If all this is beginning to sound unsettlingly familiar, Pomerantsev has more. Surkov, he says, has perfected what he calls “sovereign democracy”, a new form of governance “in which democratic institutions are maintained without any democratic freedoms”. Surkov was also “the man who [turned] television into a kitsch Putin-worshipping propaganda machine”.

If you think that’s coming uncomfortably close to a description of New Zealand television (substituting “Key” for “Putin”) then you’re not alone.

Obviously, New Zealanders are not ruled over by a political beast as big or as dangerous as Putin, but Pomerantsev’s depiction of a political environment subject to continuous and disorienting shifts of perspective; of leaders performing on a revolving stage whose sets and props are constantly changing; rings more than a few Kiwi bells.

Certainly it is Curtis’s view that the curiously “post-modern” style of politics that has distinguished the UK under James Cameron and George Osborne owes a great deal to the political ideas and methods of Vladislav Surkov. (Curtis illustrates his point by advancing video images of the Chancellor of the Exchequer and then rolling them backward – providing a potent visual representation of Osborne’s black is white, 2 + 2 = 5 political style.)

Our own Prime Minister and Finance Minister display a similar, loose, relationship with reality. John Key, in particular, seems able to shift his shape almost at will. From the saccharine family man ordering in Saturday night pizza; to the jokey-blokey sports-lover trading wisecracks with commercial radio shock-jocks; to the dead-eyed critic of Nicky Hager’s latest revelations daring the Press Gallery to contradict him; our own post-modern performance artist makes it easy to see from whence his fine-arts student daughter draws her inspiration.

Pomerantsev offers us a frightening glimpse of the sort of world to which Surkovian politics is leading us:

“In Soviet Russia you would have been forced to give up any notion of artistic freedom if you wanted a slice of the pie. In today’s Russia, if you’re talented and clever, you can have both. This makes for a unique fusion of primitive feudal poses and arch, postmodern irony. A property ad displayed all over central Moscow earlier this year [2011] captured the mood perfectly. Got up in the style of a Nazi poster, it showed two Germanic-looking youths against a glorious alpine mountain over the slogan ‘Life Is Getting Better’. It would be wrong to say the ad is humorous, but it’s not quite serious either. It’s sort of both. It’s saying this is the society we live in (a dictatorship), but we’re just playing at it (we can make jokes about it), but playing in a serious way (we’re making money playing it and won’t let anyone subvert its rules). A few months ago there was a huge ‘Putin party’ at Moscow’s most glamorous club. Strippers writhed around poles chanting: ‘I want you, prime minister.’ It’s the same logic. The sucking-up to the master is completely genuine, but as we’re all liberated 21st-century people who enjoy Coen brothers films, we’ll do our sucking up with an ironic grin while acknowledging that if we were ever to cross you we would quite quickly be dead.”

To which, as Adam Curtis rightly observes, we can only say: “Oh Dear.”