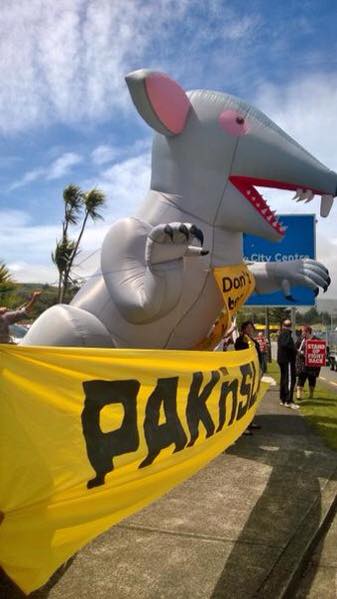 “Workers are fed up with the actions of Pak’n Save Rotorua. When FIRST Union organisers entered Pak’n Save Rotorua in early March stories of management’s disregard for employment law quickly emerged” says Mr Bradford.

“More than 70 workers have joined FIRST Union, but when we sent the owner a list of members in order for the union to meet them under the Employment Relations Act the owner and his management team reacted with a campaign of bullying and intimidation”.

“One by one the workers who joined the union were summoned to speak with managers. Every worker in a business like Pak’n Save fears a ‘call upstairs’ – to them it means they are in trouble” says Mr Bradford.

“At each individual meeting members were pressured to leave FIRST Union. Management used tactics like telling members the owner knew who joined the union, the managers then asked whether the member could afford the union fee and suggested the union cannot win a pay rise and better conditions for its members. It is an abuse of power by management and a breach of employment law”.

“FIRST Union has filed a claim in the Employment Relations Authority as a result of these meetings. The owner and his management team cannot be allowed to breach employment law because they are fearful of the union’s ability to help workers win fair pay and conditions” says Mr Bradford.

The demonstration will take place outside Pak’n Save Rotorua on Saturday 21 March at 12 noon and last approximately two hours.