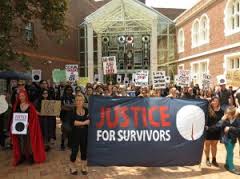 Today’s ‘part two’ of the Independent Police Conduct Authority report into police handling of the Roastbusters case vehemently supports the claims of advocates and activists, despite a year and a half of claims by police that they did all they could. The report concludes that the actions of the Roastbusters were “in some cases criminal” and that police “let down” the community.

The media release is a brutal indictment of police handling.

The report seems to infer this scenario is a one-off, but it is likely advocates working at the ground level would strongly argue otherwise. Remember we are living in a country where a rape survivor was recently asked in open court if she felt herself to be a “slut”. The truth is it is common to go to police and have them poorly handle cases or disincentive survivors from proceeding with a complaint. This needs to end. It’s time it was addressed. This situation is not good enough.

– The young men’s behaviour was clearly unacceptable and “in some cases criminal”.

– Senior police failed to consider all available offences; this would likely mean there ought to have been a prosecution.

– Police failed to act as agents to secure community safety through appropriate communication with the young men’s parents and other community groups, such as schools.

It seems a prosecution ought to proceed. However a one-off prosecution is not enough. It is imperative that we do not let this issue slide. People working at the community level on rape prevention and education are utterly clear: this kind of issue happens all the time and is part of the larger range of barriers that prevents reporting and ultimately, solutions.

It is – in all ways – inappropriate that inadequate police handling stands in the way of community safety.

This is precisely why we cannot stop yapping at the heels of this government until they ensure that at all points community safety is prioritised. The report urges for a more widespread investigation into practises to ensure this isn’t endemic. When such investigations are carried out it is important police are not an echo chamber unto themselves. They need to consult with Rape Prevention Education, TOAH-NNEST, rape crisis groups and community groups such as schools and churches, they need to carry out proper research with rape survivors, they need to work with justice system officials and educate themselves on how to intuitively handle rape cases at the community level at which they occur. Rape is the kind of crime that begs community-level engagement and management. It’s not a dark alleyway crime; it happens in dating situations, it happens at schools, it happens with friends and it happens in families.

The situation is a mess but there have been plenty of community-initiated reports into what needs to change. It’s time those changes were made. We cannot keep letting survivors down. A judicial system that is no longer adversarial but inquisitorial will remove one of the biggest barriers into reporting and allow police to proceed with more cases. It will be a good step forward to ensure that rape can be handled by courts and ultimately instead of rape being illegal ‘on paper’ will help rape become demonstrably illegal in real life.

With all of this the starting point is to listen to those affected and together take up the charge we are a country that stands united and says ‘no’ to rape.

Do not stop making a noise. Make sure you outwardly support all reforms suggested by experts in the survivor sector. Email your MP. Write to the papers. Blog about it, talk about it, make it known to your MP that you want a solution to this unacceptable crisis where only 1 out of 100 rapes results in a prosecution.

We want rape-free communities and plenty can be done to ensure the basic commitment to our safety is upheld by police and justice system officials. When laws are made and these groups are established their promise to us is that they will do their best by us to protect us. Right now that isn’t happening.

Here is the whole statement. It speaks for itself:

MEDIA STATEMENT, EMBARGOED: 12noon Thursday 19 March 2015
‘Roastbusters’ victims let down by Police – IPCA finds
An Independent Police Conduct Authority report released today has found a number of significant deficiencies in the original Police investigations into the alleged offending by a group of young men in Auckland who called themselves the ‘Roastbusters’.
Independent Police Conduct Authority Chair, Judge Sir David Carruthers, said the officers investigating these matters tended to approach each case on an individual, case-by-case, basis simply to consider whether there was sufficient evidence to prosecute the offenders for sexual violation.
“In the Authority’s view the officers should have identified the connections between the various cases and worked with other agencies to develop strategies to reduce the recurrence of what was clearly unacceptable and, in some cases, criminal behaviour. Victims were let down by their failure to do so,” Sir David said.
In November 2013 the Authority received a number of complaints relating to the ‘Roastbusters’. As a result the Authority began independently investigating two aspects of Police actions. The first aspect, which the Authority publicly reported on in May 2014, considered the information provided by Police to the media concerning Police involvement in these matters. The second, which is outlined in today’s report, considered the adequacy of the initial Police criminal investigations and the handling of any complaints or reports received by Police from members of the public between 2011 and October 2013.
In November 2013 Police informed the Authority that between 2011 and early 2013 they received reports of four separate incidents relating to the ‘Roastbusters’. During its investigation the Authority identified that Police also responded to an additional three reports of concern involving young women and this group of young men. The Authority therefore investigated a total of seven matters to determine whether there was any Police misconduct or any failure of Police practice, policy or procedure in their handling of them. This involved interviewing officers, reviewing Police files and any additional relevant documents, and accessing records held by CYF in relation to each of the cases.
In releasing today’s report Independent Police Conduct Authority Chair, Judge Sir David Carruthers said in a number of cases there were deficiencies in the investigation practices, including a failure to follow up and pursue positive lines of enquiry.
“The supervisory oversight of the individual cases was inadequate and the investigating staff failed to properly consider all available offences in determining whether or not to prosecute the young men,” Sir David said.
“The Authority found that all of the Police officers involved treated the young women and their families with courtesy and compassion and maintained good contact with them.
“However, the officer’s contact and interaction with the young men who were the subjects of the investigations and their families was inadequate or non-existent. The failure of Police to make contact meant the young men’s parents were never made aware of several of the incidents and details of their sons’ involvement and therefore they were unable to intervene or act to address the behaviour.”
“Despite the failings in this case, the Authority has not found any evidence of ongoing and widespread poor practice nationally in the Police investigation or prosecution of child abuse or sexual assault cases.
“Police in Waitemata have introduced a number of safeguards by way of better supervision and oversight of cases, and better liaison with CYF, to reduce the likelihood of a recurrence of the deficiencies identified in this case.
“The Authority has recommended that an audit be carried out by the National Manager Adult Sexual Assault/Child Protection into the current cases being investigated by the Waitemata Child Protection Team to determine whether any individual shortcomings still exist,” Sir David said.
“It has also recommended that the Police review whether any other practice or policy issues need to be addressed, either nationally or in Waitemata, and in particular whether more emphasis is required on prevention.
“The Authority has asked the Police to advise it of the outcome of their audit and review, and any subsequent action the Police intend to take as a consequence.”