“I’M SENTIMENTAL – if you know what I mean – I love the country but I can’t stand the scene.” So sings Leonard Cohen in the final verse of his grand 1992 anthem “Democracy”. The country he’s singing about is, of course, the United States of America, and his conflicting feelings about the place are shared by millions of people around the world. There is a great deal to love about America and Americans, but there is, equally, a great deal that rest of the world, like Cohen, cannot stand.

The tragic human cost of US “diplomacy”. The vast powers wielded by what President Dwight Eisenhower dubbed the “military-industrial complex”. The evident inability of the “special interests” which now control the US Congress to any longer even recognise, let alone serve, America’s national interests. All of these political afflictions, combined, have created a “scene” to which no sane person (or nation) would pledge allegiance.

And yet that is exactly what the tight little political and journalistic clique clustering around John Key (like the doomed 300 at Thermopylae?) is demanding of New Zealanders. We are being told that, in spite of its manifest failings, the United States remains the last, best, hope of humanity, and that any person, or group, who dares to question the NZ-US relationship is guilty of something very close to treason.

The prime target of this latest thrust against the Key Government’s critics is Nicky Hager. No other journalist has so consistently – and accurately – mapped the moral fault-lines running through the NZ-US relationship. Whether it be the exposure of our own Government Communications Security Bureau’s unacknowledged participation in the US National Security Agency’s Echelon spy system in Secret Power (1996) or the NZ Defence Force’s unmandated determination to range itself alongside America in Other People’s Wars (2011) Hager’s investigative journalism has for the best part of 20 years undermined successive New Zealand governments’ attempts to remain a member in good standing of the Anglo-Saxon “club”.

It is worth taking a moment to consider what New Zealand, as a member of this 70-year-old club (the USA, the United Kingdom, Canada, Australia and New Zealand) has signed-up to.

Though these five states represent less than 7 percent of the world’s population, the USA and its four closest allies constitute the Earth’s most powerful military, economic and diplomatic combination. English-speaking, and still predominantly white, the Anglo-Saxon club holds the rest of humanity (overwhelmingly non-English-speaking and non-white) in its grip. The global reach of the so-called “Five Eyes” intelligence gathering apparatus is but one aspect of the Anglo-Saxons’ “full-spectrum dominance” of the planet and its peoples.

When we consider the extent to which these powers dominate the world’s key resources – especially oil, coal and iron-ore; when we add up the number of nations that, in one way or another, are beholden to them; when we recall that the US Dollar remains the world’s fiat currency; and when the five Anglo-Saxon nations’ ability to project decisive military resources to any point on the Earth’s surface is taken into account; are we not justified in discarding the word “club” and replacing it with the much more appropriate “empire”?

No one likes to hear it called that, of course. The world is supposed to have rid itself of empires in the years immediately following World War II. Ours is a democratic age, and as every good historian knows, imperialism and democracy don’t mix. And yet, the behaviour of the five Anglo-Saxon powers, in the 70 years since the end of World War II, is difficult to characterise as anything other than imperialistic. If the “club” looks like an empire, speaks like an empire, and acts like an empire, then, chances are, it’s an empire.

The Prime Minister’s media defenders condemn Hager as “anti-American” because he has been able to correlate directly the strength of New Zealand’s military and intelligence ties to the United States with New Zealand’s loss of diplomatic independence. This would be dangerous enough in itself, but Hager’s revelations also help to remind New Zealanders of those occasions when their leaders had the courage to stand apart from the American-led Anglo-Saxon Empire. That Hager was an active player in the events that led to New Zealand declaring itself nuclear-free in the mid-1980s only sharpens the Right’s determination to blacken his reputation.

Indeed, it is becoming increasingly clear that New Zealand’s most senior and effective right-wing journalists are engaged in an attempt to fundamentally re-shape New Zealanders’ perceptions of the anti-nuclear movement. Rather than an expression of our growing sense of nationhood, they intend to re-cast it as the unfortunate result of a left-wing conspiracy to extricate New Zealand from the “Western Alliance” (also known as the Anglo-Saxon Empire). According to this revised history of the past 30 years, Kiwis have been duped by leftist radicals like Hager (and Helen Clark?) whose ultimate objective is to thrust New Zealand naked and alone into an increasingly dangerous world.

And to whom should this duped and defenceless New Zealand turn to for protection? Why, Uncle Sam, of course! Hager’s revelations have upped the ante of the national independence debate and, in Poker parlance, the Right has opted to “see him” and “raise him”. The debate about New Zealand’s involvement in the Five Eyes alliance is, accordingly, being broadened out to embrace the much more vital questions of who we are and who we serve. Will New Zealand continue striving to become an independent South Pacific nation, or will it opt to remain a far-flung, but intensely loyal, province of the Anglo-Saxon Empire?

For those who love this country, but can’t stand the political scene, the stakes could not be higher. 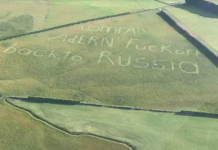