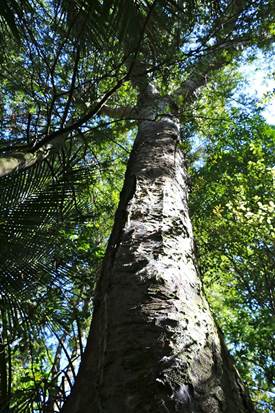 KAURI TREES weren’t always sacred. In the eighteenth and nineteenth centuries, a lot of people made themselves very rich by cutting them down. The Royal Navy couldn’t get enough Kauri – back in the days when ships were made of wood and powered by sail. Kauri masts and spars were straighter and stronger, apparently, than those fashioned out of just about any other timber. That was the first harvest.

The second harvest came around the turn of the nineteenth century, as thousands of immigrants poured into New Zealand and the colony’s far-flung sawmills struggled to keep up with the resulting demand for housing. The remaining Kauri and Rimu forests rang to the sound of the woodsman’s axe and the hair-raising oaths of the teamster.

How many Baby-Boomers have stood proudly in front of a Kauri fireplace, in their tastefully renovated Victorian and Edwardian villas, and congratulated themselves on their good taste? Not for them (or, at least, not yet) the Formica, chrome and plastic of their parents’ post-war modernist décor. They were more interested in the aesthetic of the Pre-Raphaelites and Art Nouveau than in “Space Age” architecture and Jetsons-inspired interiors. (Mad Men was still four decades in the future!)

In the 1970s old was good. And Kauri was very old indeed. The Baby Boomers’ grandparents may have cut in down. Their parents may have thrown it out. But they knew its true worth. The forests that remained must be protected. There must be no more harvests. Kauri was precious. No – Kauri was sacred. Those fireplaces became shrines.

Which raises the question: What on earth was the Auckland City Council thinking when it granted a resource consent to a couple who made no secret of the fact that, as part of their development plans, a mature Kauri tree (estimated by one expert to be 500 years old) would have to be felled? Was it simply yet another example of the Council’s bloodless bureaucracy rubber-stamping the plans of a developer without the slightest regard to the feelings of the local community? (Like it always does.) Or, was it something more?

Could it be that the generation that thinks Mad Men is the epitome of cool, is not moved in the same way as the Baby Boom generation by 500-year-old Kauri trees? Maybe old is no longer good. Maybe old is just, well, old – and boring.

Maybe, in the eyes of a growing number of young people, the natural world is no longer sacred. Maybe, to them, Gaia isn’t the pretty hippy goddess so beloved by the Baby Boomers, but an altogether more terrible deity – in whose green eyes humankind has become a planetary plague; a deadly disease; a killer species meriting no more consideration than it is showing to the many species it is driving to extinction. Maybe, to the children of Rogernomics, Mother Nature is just a cranky old pain in the ass.

“What’s so special about a bloody Kauri tree? If it’s in the way, chop it down. And if that upsets all you old hippies. Tough. Plant another one.”