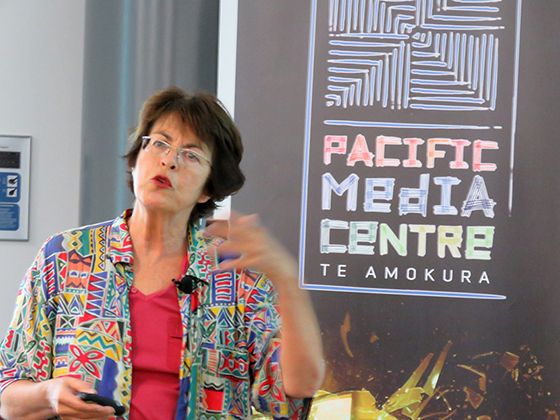 FIVE YEARS ago, as an environmental journalist and journalism educator, I attended “Oceans, Islands and Skies” – the Oceanic Conference of Creativity and Climate Change – at the University of the South Pacific in Fiji.

I found this a very moving, stimulating and inspiring experience. Until then, I had largely worked on the global and Pacific political dimensions of climate change.

At that conference I found myself thrust among a tremendously talented group of people from all over the globe. And it was where I first encountered Briar March’s remarkable documentary There Once Was An Island: Te Henua e Nnoho about the plight of the people of Takuu, a tiny Polynesian atoll in Papua New Guinea, also known as Takuu Mortlock.

The islanders were confronted with the harsh reality of rising seas and climate change and were forced to make a decision about whether to abandon their traditional Pacific homeland for the coast of Bougainville. (They were divided, some left for Bougainville – mostly younger people, others stayed).

In many ways this is an iconic storytelling of the reality of climate change told by the islanders themselves.

Conservation issues, loss of land, enforced location and culture and language erosion are a few of the worries troubling low-lying Pacific communities.

For indigenous communities, relocation will ultimately lead to culture and language loss.

At the Islands, Oceans and Skies conference, one of the statements by Fiji-based artist Cresantia Frances Koya really struck me: “In the absence of land, all we have is each other.”

The Pacific Media Centre collaborated with the University of the South Pacific and the Pacific Writing Forum to produce a book called Dreadlocks: Islands, Oceans and Skies. Why the name “Dreadlocks”? This was the title of the innovative literary journal at USP that was the co-publisher.

Ironically, the role of some Pacific government offices and how they project the climate change story globally contrasts with how they are framed and packaged locally – or not at all, with the local media often left out of the picture completely.

One is a very experienced journalist writing on and analysing science issues and the challenges of communicating complex stories and policy and empowerment, and the other is prominent Kiribati journalist researching what it is like at Ground Zero, if you like, on low-lying atolls and islands of Micronesia.

Science communication specialist Dr Jan Sinclair of Massey University, began reporting on climate change in 1987 for The Dominion newspaper, and in the early 1990s for The Observer and New Scientist in the United Kingdom.

Sinclair spoke on the theme: “Dangerously political: News framings of the risks of climate change.”

“People get most of their information about science from the news media.  With climate change and sea level rise, the news media have not adequately informed people of real risks to life, health, property and economic security,” Sinclair argues.

“Nor have they passed on readily available scientific advice about how to reduce or prevent these risks.  Instead, climate change has been represented as an issue which is political but not physical, and global therefore not local.”

Kiribati Independent editor Taberannang Korauaba of AUT University and the Pacific Media Centre recently completed a field trip to Micronesia. He spoke on the theme: “Media and climate change in small island nations in the Pacific.”

He calls for better training in the Pacific, training that is geared for the countries themselves and by their own in-country trainers, especially the low-lying countries of Micronesia that are in the front line of climate change.

Their recommendations:
•    Professional, governmental and non-governmental organisations, and national and international aid organisations should work with journalists, scientific experts and communities to devise training for the primary communicators of risk information:  the news media.

•    Pacific Islands training should take into account the needs of news media in Micronesia’s atoll nations.  Journalists in these nations have different needs compared with media based in Polynesia and Melanesia.

•    In Micronesia, training of journalists should include community representatives, and should take place on the islands or villages where climate change and sea level rise are already affecting communities and their environment.

•    This training should use the local language and work with the equipment which is available to local journalists trying to adequately inform their communities.

•    Journalists in low lying islands need training in using social media to communicate how climate change and sea level rise are affecting local communities.  Such training would help local journalists get stories to their own people and to the outside world.

•    Universities in the Pacific region should design undergraduate courses in reporting on climate change risks.  These courses should target the region’s journalists, with the aim of improving the quality of information about climate change risks which reaches Pacific island communities.  Such courses would most benefit journalists and communities if they were delivered at central campuses on the islands most affected.

A feature of last night’s seminar was the success of the livestreaming, while the venue was packed with 40 people (the maximum), a further 188 from 24 countries watched the live video (including from Fiji and Vanuatu). People are craving for information about climate change and what they can do in their lives.

Another reflection of the message in this seminar.