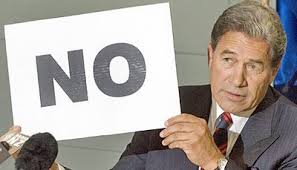 Q. What does National, Act and New Zealand First all have in common?

A. They all believe in horse trading over democratic process.

Labour has stood a candidate in Northland. She is fiercely local, listens to people and has the best interests of the Northland people at heart. It is also worth noting that she is one of the most popular Candidates in the Auckland and Northland Region for that very reason. Out of all the Candidates during the General Election, she was one of the most attentive when it came to disability rights for example.

Many Parliamentary Candidates stand for their own personal careers. I truly believe, knowing her, that Willow-Jean has the people at the core of her motivation.

And we come to the loss of democracy. Many people are urging for a deal to keep National out. Let’s get this straight from the start. I am not right of the Labour Party. I dislike National a lot, and see the damage they are doing. However the people, whether rightly or wrongly, chose them, and we live in a democracy, thank goodness.

I do not like National because this Government is not at all above lying, arrogance, self-interest and corruption. We have seen that time and time again, and yet the people sadly continue to support these toe-rags. I cannot understand why, but that is their choice, as we are in a democracy.

It has been pointed out to me that ten years ago a former Prime Minister who has long since moved to better things with the UN urged people to tactically vote. However, Labour still stood a Candidate, and fought the electorate, though it was unwinnable. People had a choice. We did not remove democratic process.

If we put democracy aside to reduce choice because we do not like the other Party we are no better than them, and do not deserve a democracy. On one hand we see demonstrations against TPPA because it takes our voice away, but on the other hand the same Party run by a cult figure wants to remove the freedom of choice for personal gains.

I am sickened by the removal of what we all hold dear in New Zealand. This to me holds the stench of corruption and self-interest, and I have never been more proud to be Labour. Seems like we may be the only ones who want to preserve democracy as opposed to following National Party dirty tactics and oiffsetting the voice of the people in favour of a preferred result.

I contend that this is New Zealand First’s version of underarm bowling, and I am sure it will backfire.

Simon Buckingham is New Zealand’s first diagnosed Autistic Spectrum lawyer. He is a social justice activist and passionate about politics.