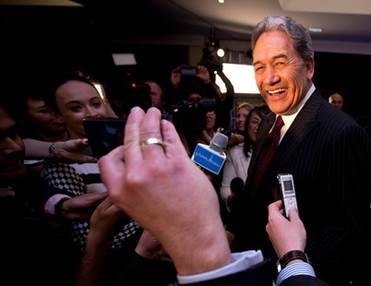 I’M TRYING TO IMAGINE the discussions leading up to Andrew Little’s wink-wink-nod-nod-a-thon on Sunday’s Q+A. Assuming, of course, that Andrew’s not flying solo on this one: struggling manfully to predict the direction from which the next manic media assault is going to come; and just winging the whole Northland by-election shemozzle by making up Labour’s strategy as he goes along.

Wouldn’t surprise me. Because, after the Cunliffe debacle, very little that Labour does surprises me.

Still, you’d like to think that the Labour Party is led by people who “get” electoral politics. Hard-bitten old tuskers who don’t allow themselves to be distracted by ephemeral political theatrics. And who can’t be deflected from “The Big Picture” by the blandishments of a hyper-mediated present. It would be so much more reassuring for the Left if that were true.

Is it though? Rumour (or, at least, Matthew Hooton on Radio NZ National) has it that Labour and NZ First went halves on a poll of Northland voters. Supposedly, to find out which of them stood the best chance of taking the seat. Waste of money. Labour’s never going to take Northland off the Nats. Why? Because Northland’s about as close as you get in New Zealand to the American Deep South.

Northland’s Pakeha voters might elect a Social Creditor like old Vern Cracknell, who took Hobson (as the northern half of the seat used to be called) back in 1966. And they’ll certainly give Winston Peters and NZ First a serious sniff. But Labour? Not a chance. Not while most of Northland’s Maori voters keep themselves off the General Electoral Roll.

So Labour should have saved its money. Taking the seat was a non-starter. Which could (should?) have meant handing the whole thing over to NZ First– with an additional promise to make Willow-Jean Prime’s feisty little campaign skirmishers available to Winston for the duration.

Short-term tactics rather than long-term strategy? For sure. But that’s pretty much what contemporary politics is about. For Labour, it would have been a case of “all care, but no responsibility”. If Winston won, it would only be because Labour got in behind him. If he lost? Hey! Nothing to do with the Left!

Presumably, Andrew and his advisers (if he has advisers) understood that. Presumably, they were after a much bigger and more worthy prize than Northland. Like Government in 2017. Presumably some hard-bitten old tuskers sat Andrew down and asked him some very hard-edged questions.

“What happens to NZ First’s numbers if Winston takes Northland? Do they go up? Or down?”

“And if they go up, how much of the increase will come from the Nats? And how much of it will be at Labour’s expense?”

“You say you want the party to be at 35 percent by the end of the year? How’s that going to happen with Winston hogging the spotlight?”

“You want to pull 150,000 votes off Key’s 2014 tally? Where do you think those 150,000 wavering Tories are going to end up if Winston recovers his reputation as a political giant-killer?”

“We thought you understood, Andrew, that winning in 2017 only happens over the battered and bleeding bodies of the Greens and NZ First.”

“If you want the corporates to resume stuffing money in the party’s war-chest, then Labour needs to be seen as the meanest son-of-a-bitch in the Opposition valley.”

“What does handing Northland to Winston on a plate make us look like, Andrew?”

“It makes us look like the stupidest sons-of-bitches in the valley!”

The political objectives of participating in a by-election may be strictly tactical, entirely strategic, or a mixture of both. Whatever the motivation/s, a political party needs to weigh the consequences of its participation very carefully. This was especially true of Northland.

From a purely tactical standpoint, Labour’s stance on the by-election was a no-brainer. Stand aside and see if Winston can take it.

Viewed strategically, however, Labour’s choices were very clear in Northland. The by-election was an excellent opportunity to compare and contrast Labour’s political objectives with those of NZ First.

Winston only stands a chance of winning in Northland because he is, in his heart-of-hearts, a Nat – and Northland is a National seat. Accordingly, the bulk of his votes will come from the “nice” people of Keri Keri and Russell and all the other comfortable settlements of the North. But the winning margin in this contest, the votes of desperate people living in dying towns like Kaitaia, have traditionally been cast for Labour.

In an MMP environment, Labour’s long-term strategic advantage will not be secured by suggesting that the interests of the deprived and the desperate can be served by other party. This by-election offered an opportunity to reiterate the historic message that things won’t change for the better in the brown towns of Northland until there’s a Labour Government in Wellington. A NZ First MP for Northland may make National work a little harder for its parliamentary majority, but he is unlikely to say or do anything that puts at risk the support of the reactionary cockies and conservative businessmen who have made it such a safe seat for the Right.

For Labour’s Northland supporters, without whose votes Winston Peters’ cannot hope to win the seat, this by-election promises little beyond the satisfaction of giving John Key a bloody nose. For the labourers repairing the electorate’s roads and bridges; the shop assistants selling tourists luxury merchandise; the over-stretched nurses and teachers struggling with the effects of poverty and neglect; National’s defeat is unlikely to bring them, or the people they serve, anything more substantial than schadenfreude.

So, Andrew, were these the sorts of issues that you and your advisers talked about before you went on Q+A? And, if they were, why couldn’t the party come up with something better than:

“In the end, by-elections are a referendum on the government of the day. If Northlanders feel they’ve been neglected and they can’t get their roads fixed and those sorts of things then they’re going to have to think about how they cast their vote in a way that sends a message to Government.”

Did it not occur to you that, with these words, you were delivering an even more important message to your own supporters? That any help that makes its way to Northland between now and 2017 is going to arrive gift-wrapped in NZ First Black – not Labour Red.