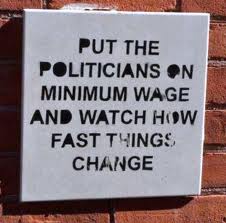 Last year, as the Inequality issue took hold of our attention, the Prime Minister was at pains to point out that income inequality had stabilised since the mid-1990s. Inequality and poverty were not our government’s fault, Mr Key in effect said.

Of course wealth inequality had got much worse the world over, including New Zealand, in the last two decades. There has been a growing discrepancy between debt owners and debt owers. And the property values of the rich have increased, with many people becoming multi-millionaires by doing little more than watching their ‘investments’ appreciate.

The recent upgrade of Parliamentarians’ salaries tells us about what has been happening to those people in the upper strata of the labour market, upon whose salaries the politicians have ‘independently’ benchmarked theirs.

An inevitable consequence of successful inequality-raising policies is that those whose pay is indexed to the beneficiaries of those policies also get higher than average pay increases. 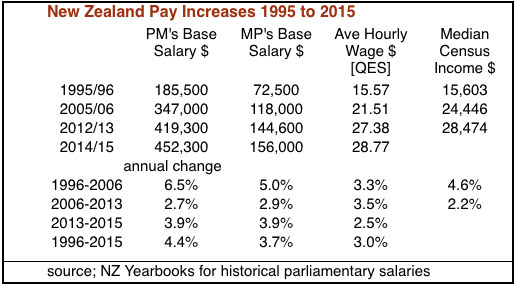 What has happened? The figures above – which are not adjusted for inflation – give us some idea.

We see that from 1996 to 2006 the Prime Minister gained over 6% per year pay increases. Ordinary MPs got 5% per year. This is telling us that salaries for the ‘managerial class’ were increasing in the order of five to seven percent per year. Hourly rates of people in established jobs only went up by 3.3%. Median incomes increased by more – 4.6% per year – as unemployment steadily decreased and hours worked per worker increased.

In the crisis period 2006 to 2013, top salaries’ growth did indeed slow in New Zealand. Average hourly wages increased faster. Many people hitherto on low wages dropped out of the statistics, while skilled workers were able to gain reasonable increases. The lower median census income growth of 2.2% shows the reality of those with insecure work. Wage growth would have been much slower had there been no Australian safety valve.

In the last two years we see the managerial class clearly outpacing the rest, with annual increases close to 4% while ordinary workers in secure jobs gained 2.5%. Rising inequality in remuneration has resumed.

For the most part, wages are determined by scarcity, not productivity. Indeed there is scarcity in managerial and other professional occupations. Ordinary workers – those without the bargaining power conferred by scarcity – will never gain a fair reward for their efforts. For New Zealand, Australia commonly provides an alternative, thereby increasing the bargaining power of workers who stay in New Zealand. But Australia is no longer providing that role.

There is a recent growth in private-debt-induced spending, however, creating enough new demand for labour in New Zealand to maintain wages just above the inflation rate, and to boost managerial wages by significantly larger percentages.

Builders (who, as Bernard Hickey noted on 4 March on Radio New Zealand’s The Panel) have been buying lots of new “double-cab ‘utes'”. Immigrants are spending. People selling houses are spending money that represents the debts of the buyers of their houses. People not selling houses are borrowing and spending against their rising property values. As well as keeping the labour market ticking over for now, this spending (and the consequent income) will see the Government in fiscal surplus in 2015/16.

While I do not feel especially sorry for our politicians if their pay soon ceases to be referenced to top managers’ salaries, I will feel sad that this window into managerial remuneration will be lost. 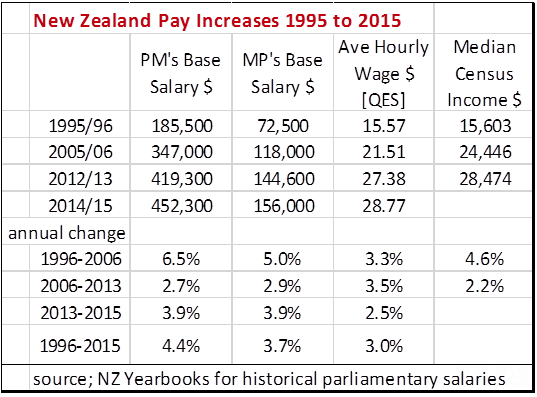