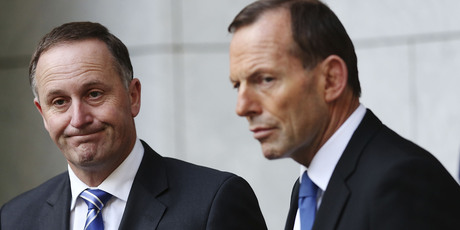 As John Key and Tony Abbott conclude new agreements around the sharing of criminal records between their two countries, we might take the opportunity to look at the criminal policies of their respective governments, at a time when the sanctity of international law is fresh on the lips of both leaders. John Key recently justified the redeployment of New Zealand forces to Iraq as a commitment to ‘stability and the rule of law internationally’, while Tony Abbott, in his speech to the UN General Assembly late last year, described the United Nations as ‘founded on the principle that we should work together for the common good; and that, over time, talking together and working together will improve our capacity for living together.’ While an ‘imperfect institution’, the UN is ‘better than might-is-right and it gives good arguments the best chance to prevail.’

A month prior to Abbott’s speech, the closest ally of the Australian and New Zealand governments in the Middle East exceeded its own drastic standards of brutality and shocked the world with its slaughter of more than two thousand Palestinians in a few weeks. With diplomatic support from Australia and New Zealand, Israel murdered women and children as they took refuge in UN shelters, or as they fled across deserted beaches to escape; bombed schools, hospitals, homes and workplaces. So flagrant is Israel’s disregard for international law that, in response to the likelihood of processions against Israel through the International Criminal Court (a pillar of international law) for war crimes committed in Gaza, Israeli officials are calling for the dissolution of the Court, and have lobbied ‘friends’ in the international community to discontinue its funding. Among their increasingly few friends: Australia and New Zealand. Israel – which, it is worth emphasizing, is the New Zealand government’s closest ally in the Middle East – has violated more UN General Assembly Resolutions than every other Middle Eastern state combined.

A glance at the Australia-NZ record of response to Israel’s criminality reveals the more glaring contradictions at work in our shared foreign policies. In March 2012, as Israel launched a fresh round of illegal air strikes in Gaza and the West Bank, such was Abbott’s affinity for Israeli terror for that he proclaimed ‘all Australians to be Israelis’. Israel’s settlement project on the West Bank, now the target of EU sanctions, is uncontroversially illegal. Almost. Julie Bishop, Australia’s Foreign Minister and now a contender for the Prime Ministership, last year questioned the illegality of Israeli settlements in occupied Palestine, demanding to see ‘which international law declares them illegal.’ Well, Israel’s settlements programme is illegal under the principles of the United Nations Charter, as well as Article 49 of the Fourth Geneva Convention and Article 43 of the Hague Regulations. Of course, none of this is news to Bishop, nor does it matter. Israel – the ‘largest American aircraft carrier in the Middle East’ – is a crucial strategic ally to Australia and violates international law with impunity.

John Key’s record is equally as treacherous. In the aloof manner with which he typically approaches international affairs, Key embarrassed his own government in 2011 by prematurely coming to the defense of the doomed Hosni Mubarak, Egypt’s 30-year dictator, on the grounds that ‘he has done his very best to lead a country which has recognised Israel’. Key, in his farcical ‘guts’ speech, invoked the immolation of a Jordanian pilot by ISIL to justify intervention, yet was slightly more reticent six months ago, when Israeli settlers kidnapped a Palestinian teenager and burnt him alive on the outskirts of Jerusalem. Nor were his much vaunted guts evident in July, as Israel was incinerating unknown numbers of innocent people trapped in their homes in the open air prison of Gaza.

Abbott and Key are equally willing to ignore the United Nations in Pakistan, where CIA drone strikes are conducted with Australian and New Zealand intelligence and diplomatic support. Ben Emmerson, the UN special rapporteur on human rights and counterterrorism, announced last year that CIA drone terror involves ‘the use of force on the territory of another State without its consent and is therefore a violation of Pakistan’s sovereignty.’ Pakistani government officials consider the campaign ‘to be counter-productive and to be radicalising a whole new generation, and thereby perpetuating the problem of terrorism in the region.’ It is difficult to see how the destabilisation of Pakistan, a nuclear-armed state, fits with John Key’s commitment to ‘stability’ in international affairs. Equally, Abbott’s comments to the UN that ISIL uses ‘the most sophisticated technology’ (such as Twitter) in its recruitment campaigns are a little hard to swallow given his complicity in the use of what is in fact the most sophisticated military technology on earth against innocent people.

CIA drone strikes have killed unknown hundreds of innocent Pakistanis, perhaps thousands; the United States keeps no records, though reports by independent agencies provide estimates and a picture of the nature of the strikes. A 2013 Amnesty International report detailed the targeting of a 68-year-old woman ‘gathering vegetables in her family fields’ who was ‘blown to pieces’ in front of her grandchildren, and the targeting of eighteen labourers, many of whom were killed in a second strike as they helped the wounded after an initial strike. Little wonder that Amnesty is ‘seriously concerned’ that CIA drone strikes, representing a violation of territorial sovereignty, also ‘may constitute extrajudicial killings or war crimes.’ Children suffer enormously where drones are most active in Northwestern Pakistan, suffering severe psychological trauma, believing that at any moment a drone could kill them. CIA Predator drones are active in Somalia, Yemen and elsewhere, in every case without UN sanction, yet the CIA will respond to no criminal allegations regarding its activities. John Key, short of screaming about guts in Parliament, quietly provides diplomatic support (refusing to confirm whether intelligence gathered by NZ agencies supplied to ISAF is used for drone strikes specifically) for the secret crimes of the United States.

If terrorising children is a mark of guts, Abbott certainly gets double points. In the squalid refugee camps where Australia’s unpeople dwell, children routinely attempt suicide and self-harm. Reports of young children, indefinitely detained, driving sharp sticks into their ears and sewing their own lips shut are among the more horrifying examples. Much of Australia’s asylum seeker apparatus – euphemistically called the PNG ‘Solution’ – is in breach of international law. In 2013, the UN Human Rights Committee charged the Australian Government with 143 serious violations of international law at its detention centres. Abbott uses sexual violence perpetrated by ISIL as a justification for illegal military intervention. Under Tony Abbott, women and vulnerable people who seek asylum in Australia will be illegally resettled in PNG, which has one of the highest rates of sexual violence in the world, where one in two women report having been raped. The United Nations High Commissioner for Refugees slammed the Abbott Government for the evident ‘protection issues’ associated with its criminal policies.

As if to coincide with Key’s announcement, the past speaking to the present, Somali terrorist group al Shabaab made veiled threats to attack Westfield shopping malls in the West. Al Shabaab is itself a product of the kind of illegal military intervention to which New Zealand is now committed. In 2006, the Islamic Courts Union of Somalia – a moderate Islamic government with popular support – established stability in the country for the first time since the civil war of the early 1990s. In doing so, the Courts expelled CIA-backed warlords, crucial to American geostrategy in the region, and were quickly removed from power through US-backed aggression (Ethiopian invasion). Somalia returned to chaos; al Shabaab quickly took advantage. In the words of regional expert Jeremy Scahill, ‘al-Shabab was largely a non-player in Somalia, and al-Qaeda had almost no presence there. The United States, by backing warlords and overthrowing the Islamic Courts Union, made the very force they claimed to be trying to fight.’ To have a slightly longer memory, many of the weapons now used by al Shabaab (to massacre 67 people in a Kenyan shopping mall, for example) were imported into Somalia by the United States under the regime of Mohamed Siad Barre, whose dictatorship the West supported for two decades, until it collapsed in 1991 under the weight of its own atrocities.

Of course, Islamic State, over the course of the same two decades, emerged in virtually the same circumstances. Saddam’s 1990-91 invasion of Kuwait began the systematic destruction of Iraq by Western governments, led by the US, first through the monstrous sanctions of the 1990s, then the invasion of 2003 – a textbook act of aggression, the ‘supreme international crime’ as determined at Nuremberg – where John Key lamented New Zealand was ‘missing in action’, and which Tony Abbott defended on the grounds that ‘it is not UN sanction that determines an armed intervention’s moral quality’ (see Robert Manne’s book Making Trouble). Again, international law begs to differ. John Key frequently uses the word ‘barbarian’ in reference to ISIS. Interestingly, Iraqis today liken the 2003 invasion of their country directly to the mongol incursions of the 13th Century. As evidence of the true source of Iraq’s contemporary barbarity, the country experienced its first suicide attack since the 13th Century in 2003, a few weeks after invasion. Al Qaeda in Iraq (AQI) revived suicide attacks in the country and over the course of the following decade would become the group we know now as Islamic State.

In the present era, our leaders invoke international law to justify their own violations of it. John Key’s ‘guts’ speech was completely fraudulent; his mock concern for victims of terror, a repulsive pretence. Alongside Tony Abbott, Key is a criminal in his own right. An honest discussion about the real threat of terror in the world must begin with a recognition that terror unleashed by Western governments, always in pursuit of narrow strategic and economic gain, creates the conditions necessary for groups like Islamic State, al Qaeda, al Shabaab and others to exist. Adherence to international law – through ratification of the use of force by the UN Security Council, for example – should be a basic expectation in international affairs and, even where these conditions are met, should be a condition of the legitimacy of intervention, not a guarantee. Every act of aggression between states, not least including, at one time, Hitler’s invasion of Eastern Europe, tends to be justified by the aggressor on grounds of humanitarianism, democracy, ‘nation building’, or some other empty platitude to international good. The use of force without UN sanction constitutes an act of aggression, the ‘supreme international crime’, for which Nazi planners were hung at Nuremberg. In the absence of organised, popular opposition to the criminal policies of our governments, it is the status quo.

Bio: Sam Oldham writes for academic and popular publications. He has been a member of trade unions and libertarian socialist groups in both Auckland and Melbourne, and is presently a member of the Post Primary Teachers’ Association and is a member of the Aotearoa Workers Solidarity Movement.