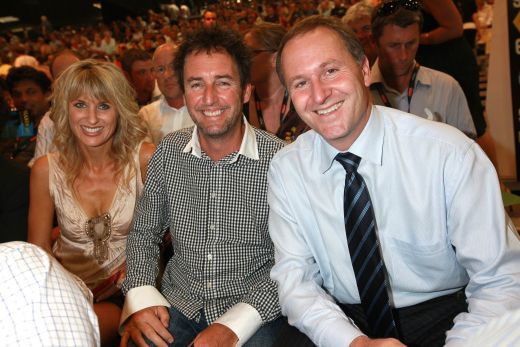 Summer is over, March is here. For some, (Tony Abbott, this means you) the Ides of March have come. For others (John Key, this means you), this war heralds  the end of the golden weather and a winter of unprecedented discontent.

On the box this morning, the PM outlined what could only be called a ‘kill and run’ strategy in Iraq.

First, any response that didn’t involve killing was not an option. Humanitarian aid may help the Iraqis but it won’t help our friends and killing is the currency of our club membership. So humanitarian aid is out. Second, everyone accepts that military intervention never works. In fact, all the evidence suggests it makes matters worse. For this reason, the PM has come up with a plan that limits New Zealand contribution to making matters worse. We will send only a tiny contingent to assist with the killing and we will send them for only two years. So that’s the plan: stay onside with our friends by sending only a very tiny force to help with the killing for only two very short years. And then we’re out of there. Mission Accomplished. What could possibly go wrong?

Put another way, the PM accepts that Iraq is a piranha pool. And we all know trying to kill piranhas by jumping in their pool has never worked. But because our friends are jumping in again, we are obliged to jump in too. But rest assured, only a tiny few will be jumping in and those few will only be exposed to the piranhas for two years. After two years, we get out of the pool and come home. Mission Accomplished. What could possibly go wrong?

Put another way, the PM has committed New Zealand to a war George Bush started with all the king’s horses and all the king’s men but did not win. Having lost then, we sign up to the same losing strategy and join the same unwinnable war but, and this is the genius of John Key, only for two years and only with a tiny military contingent. Mission Accomplished. What could possibly go wrong?

Does it matter? In the NZ Herald, Mike Hosking said it was a ‘brave and honourable’ call.   “History shows us that former US Secretary of Defence, Donald Rumsfeld, was fully expecting to be hailed a hero and a liberator when he rolled into Baghdad. Recent history shows Chuck Hagel, one of Rumsfeld’s successors, got the shock of his life at just how sophisticated, ruthless and well-financed the current enemy are. They defined the conflict, they told us how it was all going to unfold, and look what happened. Look what’s still happening. But through it all, despite it all, we must play our part. It is the right, honourable and only thing to do.”

“Look what happened. Look what’s still happening”.  Hosking has no sense of cause and effect. For him,  ignoring facts and history is “the right, honourable and only thing to do” What part of ‘warmongering propaganda leading to devastation and calamity’ does he not understand to write such rubbish? Though we won a seat on the UN Security Council, we have squandered that opportunity to assist the innocent in Iraq and forge a lasting peace and have instead taken sides in a civil war. Instead of addressing the complex sectarian causes behind the conflict, we are embroiled in its symptomatic bloodshed. Perversely, fatally, we have opted for the only response guaranteed to fail: another military engagement in Iraq, a tiny contribution of blunt force, some useless little lethal drops for this bucket of blood. How brave or honourable is this plan with no prospect of peace for them and every risk of war for  us? Does that sound brave and honorable? Doesn’t that sound like the worst of all possible worlds: no prospect of peace: every risk of war? War in Iraq, Mike! Unsanctioned by the United Nations or even our own parliament. Does that sound brave and honorable? War, declared with all the courage and moral clarity required to risk  the lives of other people’s children and spend their money.

In the NZ Herald, Fran O’Sullivan writes that ‘John Key is doing the right thing in Iraq.’ Painting him as “a craven servant of the White House – a United States lapdog happy to send New Zealand troops into harm’s way to serve America’s Middle East interests” is “an outrageously naive and insulting allegation” that will ” leave John Key smarting”. Fran makes no mention of the fact that the PM’s decision will leave a lot of people dead.  She berates the  New Zealand body politic – and journalists – for not rising  above “the reflexive anti-Americanism that remains embedded here despite successive bi-partisan measures by Helen Clark’s and Key’s governments to normalise relations with Washington and look at the wider picture before casting their stones.” For Fran, it seems the stone casting has already reached these shores. What is outrageous and insulting is that she is the one who refuses to look at the wider picture. We were anti-America’s last invasion of Iraq and, as history has proved, rightly so. The wider picture, Fran, shows that John Key is doing the wrong thing in Iraq.

A defining act is concealed a meaningless gesture. Those few troops represent a necessary statement to old friends and a never-to-be-forgotten introduction to new enemies. Under this Prime Minister, New Zealand stands for war not peace. He sends us to Iraq to stand beside our friends and help out with the killing’. How brave and honourable is that, Mr Hosking? How brave and honourable is that?

Call me gutless, but I agree with Russel Norman: “When it comes to Western military interventions in Iraq, New Zealand and the world has been there. We have done that. It did not work. It was a mess. If we want to find lasting peace in the Middle East, we need to be a voice of justice. We need to be a voice for human rights and democracy. This means we have to have the courage of our convictions, to tell the head of the club, the great nation of the United States of America, that it is time to wean ourselves off cheap oil and it is time to support genuine peace, democracy, and human rights in the Middle East.”

Call me gutless, but I agree with John Armstrong: John Key is not winning the debate: “The essential problem is with the training role. No one has any confidence it will make even a skerrick of difference to what ultimately happens in Iraq. If that is the case, the deployment becomes nothing more than a manufactured exercise in flag-waving designed to satisfy the Americans, rather than dealing to Isis. Surely the days when New Zealand was so compliant and so submissive to Washington’s wishes are long over. But it seems not.”

Declaring this country a nuclear-free zone was a brave and honorable call. Glibly and without purpose or principle, John Key has let the war genie out of the bottle. Like Dean Barker, I’m gutted.