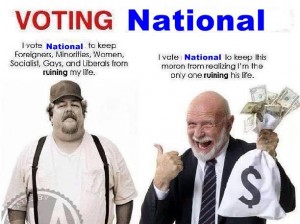 The TVNZ/Colmar Brunton poll puts Labour on 31 per cent. That’s a climb from the 25 per cent rating in the broadcaster’s last poll, in the days before the election. They got a 24.7 per cent party vote share on the night, a woeful result that saw leader Cunliffe eventually step down. The party haven’t managed to nudge above 30 per cent in a year, and the poll is likely to lift caucus morale.

But with the Greens down two points to ten per cent, roughly their election result, and NZ First down two to six per cent, a National-led Government would remain in place.

Some on the Left desperate for any news that can be spun as positive are hailing this latest poll as some sort of positive.

I think that’s being overtly optimistic.

All Labour are doing is mopping up NZ First vote, the bloody Nats went up 4 points for Christ’s sake!

That’s right, even after all the mud thrown at Key recently, National still goes up!

What it will take to change NZers love affair with John Key is still not actually clear. The mythologies of free market neo-liberal cultural values have ended up with this as a voting block… 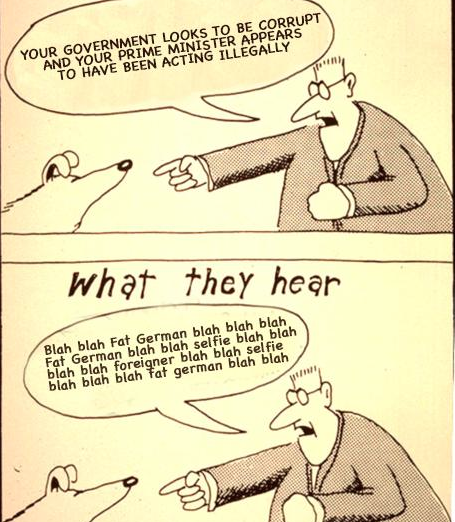 …A Poll that has Labour mopping up NZ First vote and pulling a few undecideds off the fence ignores that National are still going up.

Yes Key lied about re-invading Iraq. Yes the Education Minister is hiding Charter school failings. Yes the SkyCity deal is a dirty scandal. Yes the PMs Office colluded with the Secret Intelligence Service to falsely smear the Leader of the Opposition months before the 2011 election. Yes Bill English kept ACC levies artificially inflated so that National could create the illusion of a surplus. Yes National didn’t tell the electorate they were going to privatise $2billion worth of State Houses. Yes Key has lied about mass surveillance powers and rammed through vast erosions of civil liberties.

But a large percentage of NZers simply don’t care, they would still love to have a beer with Key around a BBQ.

Should they care? Of course they should, they should be horrified and ashamed at the abuses of power this maniac has cooked up since taking office, but wilful ignorance locks into place the subdivided middle classes, All Black photo shoots get the desperately shallow rugby mad fetishists, the depoliticised empty aspiration attracts the equally vacant Edge Radio generation and snarling spite attracts the redneck blame the unions, Maoris and beneficiaries rump of the NZ electorate. Key would need to torture an SPCA rescue pet on youtube before National voters started questioning their devoted support for him.

This isn’t an issue of an argument, this is a cultural wasteland where me me me trumps us us us.

What it also highlights is that Labour will need Coalition partners if they are ever to get to power.  Last election the attempt was to use MMP as a means of getting to 51%. With Labour, NZ First and National working together to vote MANA out in Te Tai Tokerau, the reality is Labour’s jump to the centre relies on continued cannibalisation of the left/centre parties while trying to steal off National rather than bringing new disenfranchised voters to the ballot box.

Playing a 51% style strategy in an MMP election is a possibility for National, not Labour.

There’s little to cheer in this poll.