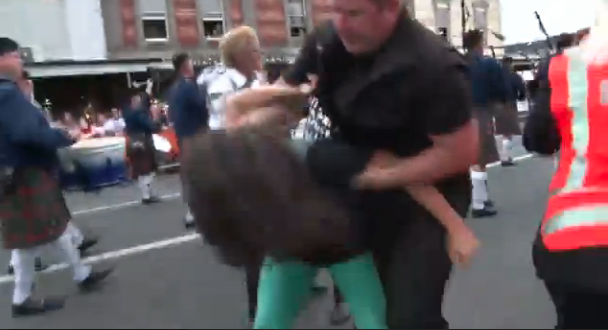 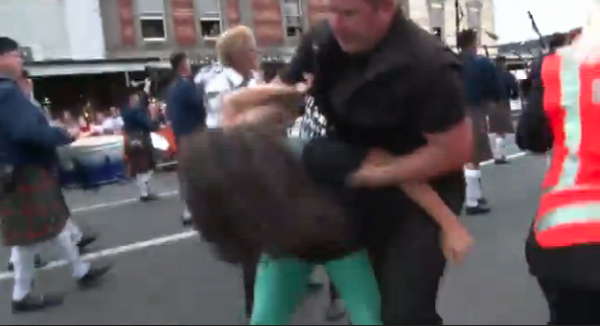 The last two years queer and trans people have protested pinkwashing at the Pride parade. This year something terrible happened; a protestor was violently injured and had her arm broken by security.

On Saturday night, when Emmy – a Māori, trans woman and a member of No Pride in Prisons – exercised her right to protest against the “pinkwashing” of police and corrections officers she had her arm badly broken by a security guard and was prevented from seeking medical treatment for a further 25 minutes by Police who detained her. In the end it took 45 minutes for her to gain medical attention. These are exactly the kind of antagonistic, hostile issues faced by members of the queer community when they are in vulnerable scenarios with officials – these are real issues – and they can’t just be wiped out by feel good parade participation. Emmy’s treatment is an example of the exact problem she was trying to draw attention to; harm rather than protection by authorities.

The footage is shocking, you can see her arm being unnaturally bent upward.

So what is pinkwashing? Pinkwashing is using gay rights to sanitise someone’s image. It’s when a company, organisation or government comes out in support of a popular cause to contribute to the clean, positive image of that group. Companies do this a lot; it’s a way of hijacking gayness for unethical means. Pinkwashing says ‘We love gays so we must be OK! We’re good and cool’. An example was the recent implementation of ‘GAYTMS’ by the ANZ bank that were subsequently targeted by protestors.

Unfortunately when it comes to powerful groups who use such tactics it can often be those who are doing questionable stuff that try to use pinkwashing as a PR strategy.

We need to reconsider whether it is appropriate for the police and corrections officers to march in Pride. There are many ways in which such authorities fail to support the community. The reason people protested this specific pinkwashing is that the police, the (in)justice system and prisons can be particularly hostile to queer/trans people – most especially people of colour. We are talking about a marginalised group who are often in positions due to that marginalisation that isn’t approved by dominant groups. Additionally the police fail the queer community in other ways. As we heard about last year, the police have a responsibility to rape survivors – many of whom are gay – and in fact trans people are most likely to be affected by sexual violence than any other group, yet justice system processes currently stand in the way of community safety by being inhospitable to rape survivors. The system disincentives survivor participation, which results in high attrition (fall out) rates and low conviction rates. If police and correction officials use gayness to sanitise their image without addressing the ways in which they really need to support the community this is disingenuous and false. Especially when they contribute to specific harm toward members of the community as they did with Emmy. If they want to really be good to the community they would show how they are in real-life ways, they would not just participate in a parade to infer that that their gay members are are OK. Realistically it isn’t just conforming gays who want to be cops that should be impacted upon by ‘good queer values’, it should be people from all walks of life – including prisoners and protestors – who benefit from true inclusive and intuitive policies; and those policies aren’t in action.

In the weekend the image of the those officials was protected over a person’s right to protest and her physical wellbeing.

Another example would be the Israeli government’s attempts around the world to portray themselves as socially progressive by participating in such events (as the Israeli embassy did last year). This distracts attention from the serious issues going on in the Palestine/Israel region, including the oppression of the Palestinian people, including queer Palestinians. What the queer community should really be doing to counter this is to be support the Boycott, Divestment and Sanctions campaign that Palestinian civil society, including queer Palestinian groups, have called on us to do in solidarity.

Both last year and this year’s protest the issue was an example of ‘pinkwashing’ that protesters were trying to draw attention to.

We can think similarly about the military; and how many in the LGBTQIA community are affected by military actions in occupied regions around the world. Again it’s not just about acceptance of conforming gays in the military. It’s most important to think about how these groups act when in opposition to others and the greater acts of these organisations.

I understand why people are sensitive about Pride. We think that in order to be accepted we have to conform to the status quo, and it’s an understandably brutually sensitive issue after generations of life-and-death struggle. But that struggle still goes on, and it’s still life and death for many in a situation where others are now more privileged. Conformity is really nice for those who are able but let’s not ignore those who don’t have the opportunity or desire. It isn’t OK for companies, organisations and governments to just use gayness to sanitise their image and erase all the crappy things they’ve done – particularly not when they are military groups/colonial states/unethical companies, etc.

People are hypersensitive about the perception that ‘pride’ or rather ‘acceptance’ will be fundamentally undermined by these critiques and by protest but in doing so they’re forgetting their obligations to solidarity with people who are still being grossly harmed by dominant, oppressive groups that include the police and state. Resistance can feel uncomfortable yes, but makes us think about what we need to think about. It feels nice that organisations want to put on a show of solidarity and acceptance but unless it’s actually founded in real values it’s only pinkwashing and they must be held account for this. Rather than saying protesters are to blame perhaps it’s more time to consider that those who are using gayness for PR purposes, need to stop doing that and address the issues that they perpetuate that continue to cause harm to marginalised groups. Maybe we need to point out to organisers that their so-called neutral ‘inclusivity’ is not as apolitical or as ‘inclusive’ as they believe. Ignoring the requirements of the most marginalised groups within the rainbow community is actually a highly politically charged, polarised act. Pride parades are inherently political. We should question the ‘assimilation agenda’ in the context of pride parades and also in the broader context of colonisation.

At its heart what people want is authenticity and greater safety. They have a right to ask for it and we should support that struggle.

You can donate to support Emmy here:

There’s Pride In Resistance Not Apartheid:

The Shame About Pride:

Thoughts On Pride and Protesting: