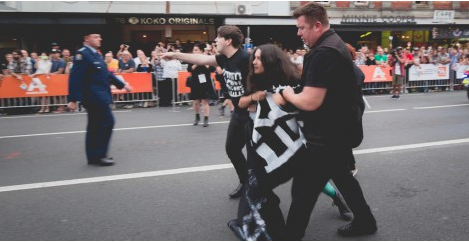 IMAGINE A MAY-DAY PARADE headed up by representatives of the Army, Navy and Air Force. With Police and Corrections officers following close behind! A little further back, Members of Parliament from the governing party wave gamely at the crowds lining the parade route. Only after all these groups have marched past, proudly declaring their solidarity with the working-class, do the country’s trade unions finally make their appearance. (May Day is, after all, a workers’ festival!) Even so, interspersed among the union bands and banners, are expensive floats, sponsored by some of the country’s largest and most successful banks and businesses.

What would such a parade say about the status and purpose of the country’s trade union movement? Surely a May Day parade in which the country’s soldiers, policemen and jailers were given pride of place could only have been organised in the old Soviet Union or one of its East European satellites?

The prominent presence of the state’s key institutions of coercion and control would be proof positive that the trade union movement had long since ceased to be in any way subversive, transgressive, or emancipatory. It would signal that trade unionists had become “okay” people to know, and that their representatives could safely be invited to gatherings frequented by the good and the great.

It would also proclaim that the state was no longer frightened of trade unions or trade unionists. And why would it be? When nothing trade unions did in any way interfered with or disrupted the smooth operation of the system. What was not to like, when trade unionists now counted themselves among the strongest supporters of the political, economic and social status quo.

The final proof that the trade union movement had been completely swallowed up by the Establishment would a media release from the Council of Trade Unions celebrating the parade as “bigger, better and more mainstream” than ever before, and praising the “massive symbolism” of the armed forces’ and the Police’s participation.

Presumably, the CTU media release would end by pointing out that: “The contrast between the bad old days, when the Police were better known for batoning strikers on the picket-line, and when the army’s trucks were used for the transportation of scabs; and the progressive present, when nearly all large institutions can boast at least one Trade Union Liaison Officer; could hardly be more striking.”

Watching a May Day Parade in which everyone from the Army and the Police, to MPs and City Councillors were proudly waving red flags and punching the air with clenched-fist salutes would be deeply, deeply depressing. It would mean that the movement I had devoted much of my adult life to promoting and defending had been drained of all its radicalism and danger.

I would feel as shocked and alienated as I imagine many LGBTIQA Aucklanders felt when they saw what used to be called “The Hero Parade” turned into a showcase for the “openness and diversity” of the New Zealand Defence Force, the Police, the Department of Corrections, Air New Zealand, assorted commercial radio stations and the ANZ Bank. As if all the vicious prejudices and hidden brutalities of “mainstream” New Zealand society have floated away like so many helium-filled balloons over Western Park.

New Zealand led the world in passing legislation that not only made collective bargaining legal but also supported it with taxpayer-funded institutions. Did that legislation succeed in overcoming the stigma attached to all those who demanded a greater share of the wealth their labour had created? No, it did not. There remained, deeply entrenched in New Zealand’s capitalist society, the most powerful antipathy towards trade unions. So much so that, in 1991, the National Party passed the Employment Contracts Act – in which even the term “trade union” did not appear.

Has the passage of legislation decriminalising homosexuality, recognising civil unions and legalising gay marriage truly eliminated the deeply entrenched negativity towards all things LGBTIQA in “mainstream” New Zealand society? Are we really as welcoming of “diversity”, so forgiving of difference, as Saturday’s “Auckland Pride Parade” organisers insisted? The tragically large number of young people committing suicide in response to their families’ and their peers’ reception of their sexual natures suggests that we are still very far from that goal.

More than forty years ago, the radical sociologist Herbert Marcuse coined the phrase “repressive tolerance” to describe the way capitalist society was subverting the traditional concept of liberal tolerance and transforming it into its opposite – subtle domination. All those institutions and social tendencies considered hostile to capitalism’s interests were gradually being absorbed into its processes and neutralised. As I watched the Auckland Pride Parade make its way along Ponsonby Road on Saturday night, and contrasted its corporate slickness with the wild and gloriously transgressive Hero Parades of the 1990s, I silently congratulated old Marcuse for his insight.

And later, when I read about the young person whose arm was broken by a security guard for daring to protest against the oxymoronic travesty of soldiers, police officers and jailers celebrating unconventional sexualities, I offered up a silent prayer to the gods and monsters of perversity and resistance: the ones who embolden rebels and keep the authorities off-balance. Among that gawking and guffawing crowd, they’d reassured me, there was at least one human-being who still knew how to say: “No!”