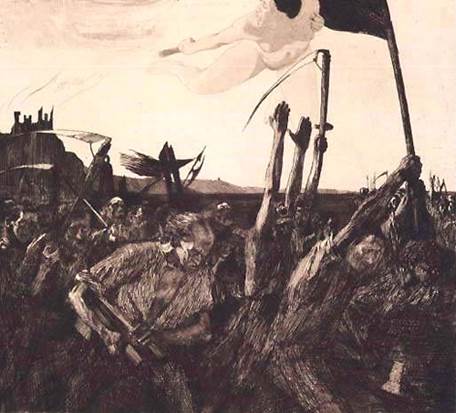 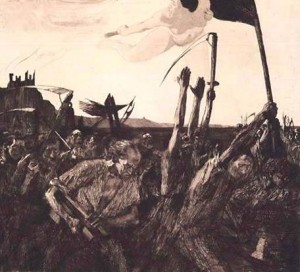 WHAT DOES A GOVERNMENT have to do before it forfeits all legitimacy in the eyes of its people? It’s a question many people have asked down the centuries. In the modern era, no person has set forth the conditions under which all government legitimacy may be considered lost more eloquently than Thomas Jefferson. Author of the American Declaration of Independence (1776) Jefferson set forth in the rolling cadences of the Eighteenth Century exactly why governments are created, and exactly when they may, justifiably, be destroyed:

“We hold these truths to be self-evident, that all men are created equal, that they are endowed by their Creator with certain unalienable Rights, that among these are Life, Liberty and the pursuit of Happiness. That to secure these rights, Governments are instituted among Men, deriving their just powers from the consent of the governed. That whenever any Form of Government becomes destructive of these ends, it is the Right of the People to alter or to abolish it, and to institute new Government, laying its foundation on such principles and organizing its powers in such form, as to them shall seem most likely to effect their Safety and Happiness. Prudence, indeed, will dictate that Governments long established should not be changed for light and transient causes; and accordingly all experience hath shewn, that mankind are more disposed to suffer, while evils are sufferable, than to right themselves by abolishing the forms to which they are accustomed. But when a long train of abuses and usurpations, pursuing invariably the same Object evinces a design to reduce them under absolute Despotism, it is their right, it is their duty, to throw off such Government, and to provide new Guards for their future security.”

Were Jefferson, transported through time to Barack Obama’s America, to publicly assert “The Spirit of ‘76”, it is highly likely that he would find himself under investigation by the FBI, the Department of Homeland Security, or both. For openly proclaiming the right of the American people “to alter or to abolish” their system of government – should it become destructive to their “unalienable rights” – he would, almost certainly, find himself placed on what Edward Snowden calls the “cast-iron watch-list” of the National Security Agency. There he would be subjected to “a long train of abuses and usurpations” considerably more despotic than anything contemplated by the loyal servants of King George III.

We New Zealanders, though lacking entirely the revolutionary tradition of a United States or a France, are able to boast the longest, continuous exercise of fully democratic government on the planet. Governments elected by universal suffrage have ruled New Zealanders since 1893 – much longer than is the case in the United States, the United Kingdom, France or Germany.

This long, unbroken stretch of government with the consent of the governed has instilled in New Zealanders a possibly over-large measure of the “prudence” which Jefferson cites as the explanation for human-beings’ disposition to “suffer, while evils are sufferable”. Rather than secure our rights by abolishing the form of government to which we have become accustomed – and which has, up until the late-1980s, at least, served us extremely well – we have been willing to cut our political masters an awful lot of slack.

Not being natural ideologues, we struggle to make the connections between the neoliberal policies imposed upon this country by successive governments since 1984 (none of which have ever had the courage to seek an explicit electoral mandate for the entirety of the neoliberal programme they intended to pursue) and the appalling social consequences to which those policies have given rise.

Although the cause-and-effect relationship between cuts to mental health services and successful suicide attempts is indisputable, very few New Zealanders would consider it fair or appropriate to lay those deaths at the door of the responsible Cabinet Minister. Similarly, most Kiwis would feel uncomfortable about sheeting home the blame for child abuse and domestic violence to a government’s failure to pursue policies of full-employment and the provision of public housing. Many of us regard such ills as the unavoidable “collateral damage” of responsible public administration.

Where most New Zealanders would draw the line, I suspect, is at the suggestion that their government might be willing to sacrifice the life, or lives, of a New Zealand citizen, or citizens, in the pursuit of purely partisan political objectives.

The protection of its citizens, both at home and abroad, is the first and most fundamental duty of any government. To abrogate that duty, for whatever reason (other than to ward-off an imminent and deadly threat to the whole population) would not be accepted by the vast majority of New Zealanders.

Were it to be proved that the government had been willing to allow one or more of its citizens to be reduced to a mere pawn and then ruthlessly sacrificed in some partisan political chess game, that might just be enough to see Kiwi “prudence” thrust angrily aside.

Such a government would have forfeited all claim to moral and political legitimacy. Channelling the spirit of Thomas Jefferson, many thousands of New Zealanders might even conclude that, in the face of such insufferable evil, it was their right – and their duty – to throw off such a Government, and provide new guards for their future security.