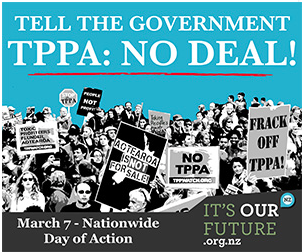 If you were one of the 10,000 plus Kiwis who joined the national day of action against the Trans-Pacific Partnership Agreement (TPPA) last November, we need you to join us again on Saturday 7 March – and bring 5 new mates along – to tell the government: “TPPA: No Deal!” At least 16 different parts of the country have so far put their hands up to organise some action. That’s what democracy looks like!

I can hear some of you sighing ‘oh, not again’. Believe me, there is no one who would rather stay home on 7 March and weed the garden or go for a picnic at the beach than me. But we are at the stage where complacency, saturation or boredom plays directly into the hands of the government, who have deliberately kept the TPPA out of the spotlight. Editors are turning down stories saying ‘there’s nothing new’. Once the TPPA is off the radar, the government is home and hosed.

The mobilisation on 7 March is not just a photo op – although there will be some great street theatre. It is make or break time for the TPPA and we need to inject a real sense of urgency into the campaign. Rhetoric about the ‘end game’ has been around for several years. This time is it true. Obama desperately wants to get the deal through as part of his legacy. For that to happen, people working the math in Washington say he needs a deal signed in May. Obama’s team is planning how to short-circuit the formal steps, especially in the US Congress, to make his legacy possible.

That timeframe puts all the other countries under extreme pressure to cave on remaining issues. It was clear from talking to officials in New York in January at the last secret squirrel round of talks that the technical negotiations are now basically over, aside from one more meeting for a small number of groups. We are now in the political zone. The current plan is for Ministers to meet in mid-March to conclude a deal, and have a formal signing probably sometime in May.

In an op-ed in the Herald on 6th February I explained why the elusive deal between Japan and the US is still the biggest barrier – and how left field demands from Congress for rules on ‘currency manipulation’, combined with the US blackmail process known as ‘certification’, are raising the political stakes in Japan even further. But we can’t simply assume that will save us.

Three months of intensive activity can stop the TPPA or at least put it into the deep freeze. Here is one thing you can do, in addition to joining the nationwide day of action on 7 March.

The inclusion of investor-state dispute settlement – ISDS – in free trade and investment treaties gives foreign investors the right to sue the government in secretive offshore tribunals of dubious legal legitimacy when new laws or policies seriously affect the investor’s value or future profits. They can claim hundreds of millions or even billions of dollars, with the aim of getting governments to back off or forcing them to reverse the policy or fork out taxpayer money to foreign corporations. Think plain packaging tobacco.

Fortunately, we have signed very few of these agreements. The TPPA would be the granddaddy of them all, because it gives US TNCs a license to sue.

The government knows the sun is setting on these controversial powers internationally, and there is a groundswell of opinion against ISDS within New Zealand. But that has not stopped it from signing us up to another treaty that gives those powers to foreign investors from South Korea.

The New Zealand Korea Free Trade Agreement will be tabled in House very soon. It will go to a select committee for a Clayton’s hearing where neither the committee nor Parliament can make any change. Usually they hear from a handful of industry cheerleaders and a couple of critical academics and unionists, and the treaty becomes a done deal.

We want the select commute deluged with submissions from Kiwis from all walks of life who demand an end to ISDS in any New Zealand treaty. The select committee process is incredibly short, so there may only be a week to do this. To help people, the ItsOurFuture website will have a dedicated page with a standard form submission, as well as information for people wanting to tailor their own.

As many unions, health professionals, local councils, iwi, environment groups, local councils, mining campaigners, also need to highlight the risks to their constituency and insist that they want to appear before the committee. The web-based resources will be available later this week for people who want to prepare in advance. As soon the treaty reaches Parliament, the alarm bells will sound.

Hopefully, there will also be a members’ bill presented in the House around the same time calling for no ISDS in any future agreements, which can bring further pressure to bear on the issue.

The grand plan is to reinforce those submissions with adverts in the Auckland and Wellington papers on the morning of 7 March that is crowd-funded so people can put themselves on record as opposing ISDS in the TPPA or any other free trade and investment deal.