This Saturday, February 14, over 100 fast food workers from across New Zealand will be gathering in Auckland to discuss their upcoming battle to end zero hour contracts in the fast food industry. The conference is also open to anyone who wants to actively support the workers campaign.

This issue has emerged as the number one problem for workers in the industry over recent years. Almost no hourly paid staff have guaranteed hours. Attempts through previous collective agreements to regulate the allocation of hours in a fair and transparent manner have been unsuccessful. Unite has collective agreements with McDonald’s, Restaurant Brands (KFC, Car’s Jr, Pizza Hut and Starbucks); Burger King and Wendy’s. Whilst real improvements have been made it has proved difficult to get the companies to abandon their attachment to “flexibility” around rostered hours. The best we have achieved is to have clauses that specify the need to advertise hours to existing staff before new staff are hired but that has proved difficult to enforce.
The companies have a turnover of staff of about 66% a year and we have tried to argue that this could be reduced with regular guaranteed hours but the companies seem unmoved by that argument. They seem to prefer the control that zero hour contracts give over their staff. These type of contracts also exist in the security industry, hotels and many call centres where Unite represents workers as well.

SkyCity casino has a variation of this contract but with all part time staff having only an 8 hour minimum. This gives the bosses there a similar ability to maintain control over their staff and have them competing for favours for more hours. They have resisted very strongly against guaranteeing workers and particular shifts even if they are on the busiest nights of the week. Over the last few years they have restructured huge department like Gaming Machines to turn them from being 75% full-time to being a 75% part time department. They have refused to hire a full-time table game dealer for years in order to achieve the same result. Again we have pointed out that there is a higher turnover of part time staff and they lose many to Australia where they can get full-time work – often with the same employer! You might think that the training costs would be high as a consequence but they force workers to do a training course run by the company without pay before they are employed. WINZ assists them in this scam as well. That is another hidden government subsidy.

SkyCity delegates Unite Union delegates support the campaign to end zero hours
Joining the Auckland conference will be two McDonald’s workers from the USA who are part of the campaign in Los Angeles for “$15 and hour and a Union“. Anggie Godoy, 19, and Genoby Jaimes, 27, are in New Zealand to support Unite Union’s campaign against zero hour contracts in the fast food industry. They also had the opportunity to meet with the Council of Trade Unions and members of parliament in Wellington. They are also interested in learning how we were able to win union recognition and force the companies to bargain with a union – something all the companies refuse to do in the US.

Public support for our campaign against zero hours has been widespread. Even many right wing commentators in the media seem shocked that these contracts exist. Three opposition party leaders – Andrew Little from Labour, Metiria Turei from the Greens and Winston Peters from NZ First – spoke to the December Unite national delegates conference to support our ant-zero hours campaign. This week the Labour Party announced they would be sponsoring a bill in parliament to outlaw zero hour contracts by requiring employers to include the hours to be worked in employment agreements. The Green Party MP Denise Roche has also told Unite she plans to sponsor a similar bill.

A few months ago over 1000 Unite Union fast food members completed an online survey on how management control over their hours affects them. This was 25% of the union’s membership in the industry and was a sign of the deep feeling that exists. Workers in every company responded in proportionate numbers to their membership of Unite and all had an overwhelming desire for more hours and for those hours to be able to be built up over time and guaranteed from week to week.

The survey gave the opportunity for workers to tell their stories and may of them were pretty horrific in terms of how often inexperienced managers used and abused the rosters to reward and punish staff. Simply asserting their legal right to breaks or sick leave could result in punishment the following week in terms of the hours they are rostered. Everyone knows what has happened but it is often difficult to prove intent. Many workers reported that their hours were cut as soon as they joined the union.

Putting an end to this state of affairs has become the number one priority in negotiations to renew the fast food collective agreements which all expire on March 31 this year.

Workers at Wendy’s have already started taking action because their collective agreement hasn’t been renewed this year because the company had no improvements to offer. This is the only company that hasn’t agreed to 15 minute paid breaks rather than 10, and has been routinely denying workers alternative holidays when they work on a public holiday. Workers at five store in Auckland and Papakura walked off on Tuesday, February 10. Other stores will be joining the battle in the coming weeks. 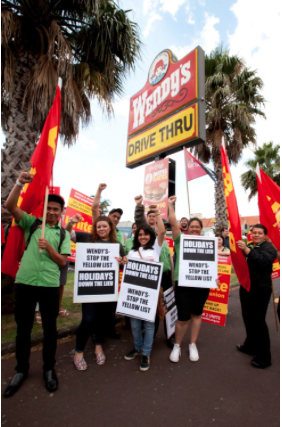 Wendy’s workers strike joined by US McD’s workers
The worker’s say the company sometimes changes their roster just before a public holiday so they can pretend it is not what is legally defined as “an otherwise working day” which entitles the workers to a lieu day for working the public holiday.Some employers think this type of theft is acceptable because “zero hour contracts” don’t guarantee any particular number of hours or shifts on any particular days. Unite Union maintains that manipulating a roster in this was is not lawful and are demanding that the company give workers an alternative holidays for every public holiday worked at Wendy’s as part of the claims in this year’s collective agreement negotiations.
The February 14 conference will be finalising claims from workers for the collective agreement negotiations and electing representatives to the bargaining team. Around lunchtime there will be a rally outside McDonald’s Grey Lynn store to publicly launch the campaign to ”End Zero Hours in 2015” and to support our guests from the US McDonald’s workers campaign for union recognition and a living wage.

The fast food workers conference is being held at the Auckland Traders Hall, 147 Great North Rd, Auckland. Registration is from 8.30am