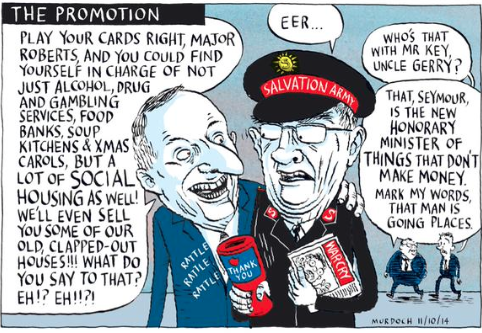 I have been wondering for a long time where the annual MSD’s statistical report is hiding. It appears, without anyone being informed, that the 2012 statistical report was the last one. The MSD seem to consider that their benefit facts sheets are enough. Consequently as The Salvation Army State of the Nation report comments, it is very hard to know what is going on.

We are dished up simplistic indicators (eg the reduction in welfare numbers) then the media are left to spin them, as if they herald a new dawn. Thus the state of the nation report was hailed this morning in the NZ Herald under the banner “Life gets better on most indicators”

Child poverty is dwindling, more people are in jobs and people are drinking and gambling less, the Salvation Army says. The army’s eighth annual “state of the nation” report says life is getting better on 14 out of 22 indicators of our social wellbeing. Only four indicators are getting worse and four others are inconclusive.

The ‘evidence’ the Herald cited to support the view that child poverty is ‘dwindling’ is found here:

Children in families on welfare benefits have dropped to about 17 per cent of all children, the lowest for 25 years, through a combination of welfare reforms pushing sole parents into work and more jobs pulling the unemployed back into the workforce.

This is not evidence of success. We do not know what has happened to sole parents pushed off their benefits. As the author of the Salvation Army report says, the historical link between numbers of benefits and numbers of children in poverty may have altered.

While most New Zealand children are materially secure and well supported by their family as well as schools and health services, a significant minority—perhaps 20%—face a number of social and economic risks. Over the past two years progress for these children has been minimal and there are some signs of things getting worse for the most vulnerable children.

But they also say

Recent declines in the number of children living in benefit dependent households is welcome news, although there is no evidence available to suggest that children no longer reliant on benefits are any better off—in monetary or material terms.

My observation is that the Salvation Army can’t have it both ways. To say that getting children out of benefit dependent families is welcome news buys into the ideological view that welfare is always bad, paid work is always good. For women looking after children on their own this is a cruel judgement indeed as they struggle with the difficult and unappreciated work of bringing up the next generation, often with little material or emotional support.

When will we put the needs of children first? If the improved economy is reducing some pressures at least a little at last for some, what happens when the next downturn kicks in? The badly designed welfare and family tax credit system needs immediate attention.

As Andrew Little and Russell Norman said so well in their speeches in the first day of Parliament, child poverty is a major, and very serious issue for New Zealand. It will require a huge commitment to solve and relying on economic growth alone does not work. As the Salvation Army report stresses, secure affordability housing is fundamental for family well-being and must be a priority for policy. But families with children need more spending money. There are urgent steps to take to correct the miserable failings of Working for families as this AUT Briefing Paper Series What should be done about Child Poverty? outlined.

To fix Working for Families and address housing policy new spending of the order of at least $1 billion per annum is required. Where will it come from? What about creaming 10% of the $10 billion net cost of New Zealand Superannuation from high income supernannuitants? They would not even notice but if they did, many would think if was fair enough. This paper Improving the affordability of New Zealand Superannuation shows how it can be done.