Migrants moving to any country make big sacrifices in the hope of the bigger goal to live a better life in a better country. In NZ our economy also needs migration to succeed. Beyond this utilitarian analysis, we should also think about what people actually have to go through, in their quest for residency. We should bring our humanness back into how we think. The quest for residency is really a desire to participate on fair terms in the job market. Afterall, almost every other aspect of the market is globalized to some extent but not the free and unfettered access by all workers to all job markets. Is it ok to have a group of people living as second class citizens in NZ simply because they are on work visas?

During 2014 Migrant Action Trust worked with their 20 affiliate community groups along with a number of supporting community organizations and unions including the Auckland Refugee Community Coalition, Migrante, and the Living Wage Movement to create the document “Making Multiculturalism Work”. They used this to lobby local and national government candidates for commitments on the ten key areas of concern. Longstanding issues that have been raised time and again. To date under-resourced community organizations have done the work in settling new migrants. The commitments made by each party were as follows: 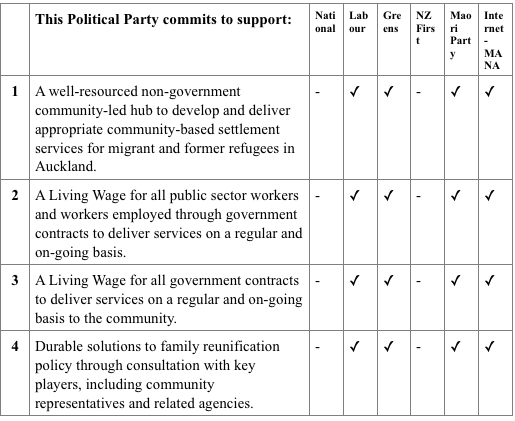 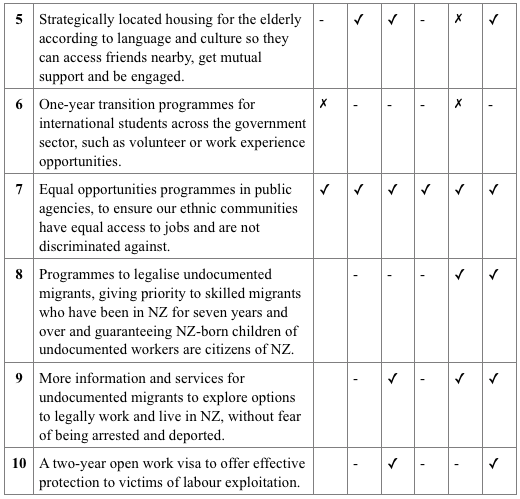 It seems the migrant community (which includes former refugees and new Pacific migrants) have little to hope for from this National government. The government also refused to assist with issues raised in its previous term.

The 2013 Census revealed a New Zealand of increasing ethnic diversity – 213 ethnic groups to be exact. New Zealand, and Auckland in particular, can now be classified as “super diverse”. We now have over one million people living in New Zealand who were not born here. Twenty-three per cent of Auckland is Asian, now a very significant non-majority population. After New Zealand European and Maori, the largest ethnic groups in New Zealand are Chinese, Samoan, and Indian. Ethnic diversity has been increasing. We also have a sizeable population of around 145,000 people on work visas, a further 73,500 on student visas and eligible to work up to 20 hours per week, and up to 8,000 Regional Season Employer Scheme workers from the Pacific.

A critical question to ask is how has the government (local and national) responded to the increase in the number of new migrants in NZ, particularly in Auckland. Tragically, those on a work visa are also not able to access a variety of social services, ironically including migrant settlement services.

The Migrant Employment Assistance Fund managed by WINZ restricts third party service providers with severe eligibility criteria: to assist only those who have been residents for less than two years, or those who are on a open work visa (this would include the Silver Fern visa, graduate job search visa, work visa via partnership). It therefore clearly excludes those workers on a student visa eligible to work up to 20 hours, as well as anyone on a working holiday visa or part of the NZ-Pacific Recognized Seasonal Employer Scheme. However it is the latter, on the more restrictive visas, that are more likely to need help. For example Chinese and Filipinos on working holiday scheme are restricted to work for one employer for a maximum of three months making their time in NZ particularly difficult.

Furthermore, currently most services offered are only informational (leaflets or websites), the big gap is more hands-on help, which is especially needed at initial stages. However the government prefers to fund ‘more efficient’ informational services, essentially leaving migrants stranded until they get on their feet the hard way.

Auckland Council prides itself on multiculturalism, spectactularly displayed through the public festivals like Chinese New Year and Diwali. In contrast, there are actually no programmes from the council to help new migrants settle, despite Auckland being the main recipient of new migrants. Multiculturalism is a flagship enterprise for Auckland Council, which capitalises on cultures that it does not directly support. Fundamentally neither Auckland Council nor the government are really addressing the true social and economic issues that come with diversity and settlement of new migrants. New Zealand continues to attract skilled migrants who often feel misled once the realities of the NZ job market become apparent.

Exploitation of new migrants happens primarily because they are caught in a catch-22 with their employer due to visa regulations and cannot speak out. Anyone on a work visa or working holiday visa is heavily reliant on their employer – both to renew their work visa so they can stay for another year; and because changing jobs is risky, the less time on your visa, the less the employers want to hire you.

Compound this catch-22 with the racial prejudice in the job market, as well as the willingness of migrants to endure more hardship (because they have more to lose), the system filters most migrants down into casual, low paid, low skill, sometimes unpleasant jobs in the service sector like door-to-door sales, parts of retail sales, call centre work, customer service centre work, cleaning, caregiving and hospitality work; and also in the farming/horticultural sector. Worth noting: Racism accounts for 55% of surveyed incidences of discrimination (2008&2010 NZGSS) most of which was experienced while working or when applying for/keeping a job.

More factors compound issues further: Many are not unionized and don’t have advice and support when they need it; the shame of returning home a failure; the reality of family reliant on your remittances; living week-to-week on low wages meaning switching between jobs is just too risky. Easliy work-visa holders are trapped in bad work conditions.

This structuralised desperation serves to drive wages down, especially without collective bargaining, as Helen Kelly, President of the Council of Trade Unions, pointed out last week: 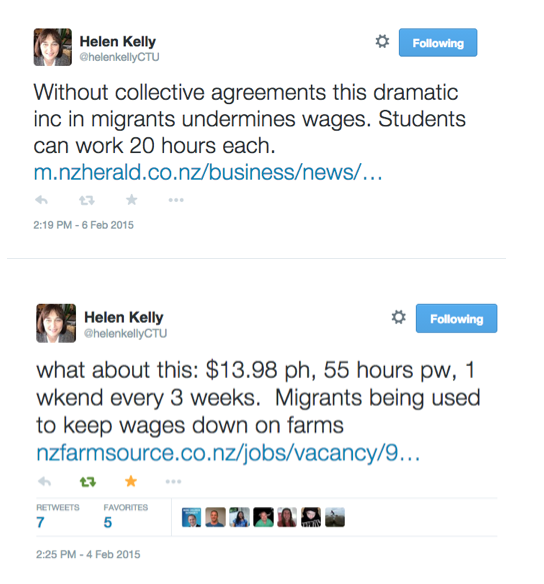 This point should not be raised to blame migrants, they are living in a game designed by elites. Contracts and payments are not monitored but rely on employees to come forward and make complaints. For all the reasons discussed and more, few migrants can challenge their employers. Sometimes the incidence of exploitation can go on for years: being paid less than minimum wage, having pay withheld, bad working conditions.

So next time your dinner is interrupted by a telemarketer or door-knocker, most likely a migrant worker, take the time to muster some kindness and respect. This part of our community is on the margins and their suffering and challenges are largely invisible. Kiwis enjoy the diversity of cultures that makes life and food in their cities more interesting, however the low status and precarious position of many of these people, that are really striving hard, is not adequately acknowledged or responded to by public institutions. Most new migrants are caught off guard by the realities of living in NZ, but take whatever means necessary to stay here including demeaning, unpleasant work or living conditions; and being separated from loved ones. It’s a silent struggle that noone wants to know about. Politics is on the side of voting residents. Various forms of xenophobia shape the election topics headlines whether it is about migrants driving up the property prices or taking jobs; however what goes unsaid is the convenience for New Zealand residents to have willing workers for some of the worst jobs in our society. Perhaps it’s not the migrants that should be grateful to be in NZ, but Kiwis that should be grateful for our migrant communities.

Roshni Sami, BA/BCom, MA, Auckland, New Zealand. — Roshni Sami is an activist, researcher and project manager. She is of Pakeha and Fiji-Indian heritage. She returned to Fiji to after grad school and worked for six years in the Pacific doing work for development agencies such as UNWOMEN, AusAID and other not-for-profits organisations including running the Pacific Network on Globalisation a trade policy watch-dog.   Disillusioned by what she saw in the development sector, she returned to New Zealand in 2011 and worked in property for three years, before supporting the Internet MANA campaign in the 2014 election. She is currently volunteering with Migrant Action Trust in Auckland.