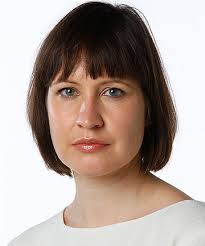 Over the course of the last Parliamentary term, she’s seen her star chart a curious trajectory; from up-and-coming foreign-import reporter, to a perceived manipulator of the questionable judgement of older men, and on to being the unquestioned victim of an egregious breach of privacy through governmental witch-hunt.

Through it all, she’s maintained an interestingly intensive scrutiny on my beloved New Zealand First.

Considering the caustic role of one Winston Peters in exposing Vance’s source for some of the more *ahem* confidential elements in her GCSB coverage, you can perhaps understand (if not necessarily forgive) her for holding a bit of a grudge in our direction…

It was therefore no great surprise when I checked the bottom of a recent Sunday Star article that began with “NZ First MPs […]” and ended with a snidely critical tone, to find Vance’s name attached to it.

Now let’s get one thing clear. New Zealand First MPs are *paid* to act as a trenchant and tireless critic of bone-headed governmental policies. One of our chief roles as the *leading* Opposition party is to ask questions, call to account, and generally shine a spotlight of scrutiny on *whatever* latest iniquity the government is trying to pull.

… you’d still expect at least a *little* gratitude from the Parliamentary Press Gallery’s quarter – and some positive affirmation of the fact that NZF MPs have kept working at improving our Nation all through the summer, while others have been either at the beach or all at sea.

Unfortunately, no such luck from Vance. She starts off by declaring we were merely “shouting into [the] void”; then bizarrely starts criticizing Ron Mark for *doing his job properly* and tapping into righteously rancorous public sentiment against the manifestly ridiculous Zero Tolerance speeding policy pursued by the police.

Seriously. She *literally* attempts to criticize Mark for giving voice to popular public sentiment against the government; and then finds fault with attempting to hold the relevant Minister responsible to account! Both things that are, I’m pretty sure, entries number 1 and 2 on the List Of Things Opposition MPs Are Supposed To Do With Their Time.

It’s almost as if the thing that’s *actually* annoyed Vance here is the idea that NZF MPs are capable of taking demonstrably sensible positions that resonate with the electorate … and acting independently and outside of her tired cliche that we all must inexorably exist within Winston’s shadow.

Vance then goes on to defend the totally inadequate handling by our Navy and Foreign Affairs ministry of the recent Antarctic Toothfish poaching incident, portraying the execution of *absolutely standard* naval procedure in encountering and apprehending pirates or plunderers as “bonkers logic” and some sort of act of unjustified and perilous aggression against a “starved slave crew”.

Just what, one wonders, would Vance have had our Navy do to uphold our international obligations under the Convention on the Conservation of Antarctic Marine Living Resources, or when encountering *other* instances of illegally flagged rogue vessels rampaging through a marine sanctuary under our watch – especially, for that matter, when the ships in question penetrate our own territorial waters.

Is she one of those people who feels, for instance, that the Japanese ought to have free range to go a-whaling in our territory..? How does she think that piracy off Somalia ought to be dealt with..? What does she make of the Australian Navy’s no-nonsense approach to same? Does she even understand the point Mark was making about manifestly potentially deficient Rules of Engagement?

Matters then proceeded from the super-silly to the supercilious when Vance attempted to take Prosser to task for his remarks on the ecological impacts of 1080 poison drops.

There are legitimate positions to be taken on either side of the 1080 debate, and I would be remiss if I didn’t mention the litany of previous *personal* disagreements as applies environmental policy I’ve had with the man on everything from climate change to fracking (thankfully, none of which appears to be reflected in Party policy) … but on the matter of mass aerial poison-drops causing flow-on effects *well* beyond what’s intended when it comes to our native birdlife populations, the man’s reasoning is *rock solid*.

1080 is *designed* to be taken in by various introduced rodent and marsupial critters. It’s well renowned for taking awhile to kill, and reducing the ingestor to an agonizing and drawn out termination. During this time a slow-moving and impaired prey-animal is going to be a much more obvious – and thus, edible – target for the languid and lazy talons of our famously less-febrile birds of prey. The idea that a dead rodent or possum might be feasted on by a native bird of carrion is, similarly, entirely self-evident. And you can imagine what happens once the poisoned-meat enters their system… (a narrative chain of causation I had confirmed in the course of researching this article by chatting with a conservation expert specializing in the preservation of our hawk populations)

In light of this, Vance’s demand that the MP produce a “rock wren corpse” as evidence that 1080 can have undesirable impacts on native bird populations makes a turkey not out of Prosser…

In any case, the most revealing bit of Vance’s “expose” isn’t any of her stabs at our party’s press releases.

Instead, it’s the rather telling line about how “desperately bored journalists” attempt to “drown out other voices”.

I believe this is what’s known in psychological circles as an “exercise in projection”.

Oh and, as applies her last line … while I’m sure she’s relishing the thought of going back to Winston-centric coverage, rather than paying attention to the output of a half-dozen competent NZF MPs … No, Andrea – calling to account the journalistic output of an import such as yourself is *not* the same thing as Xenophobia 🙂