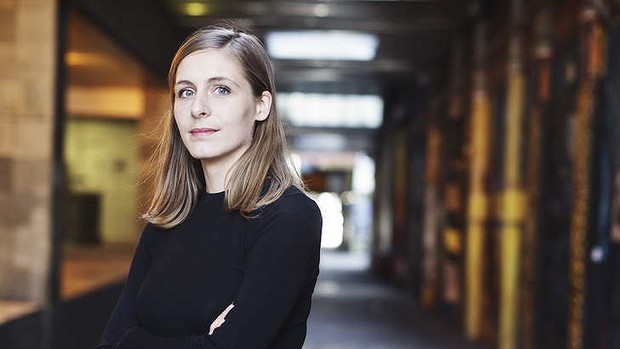 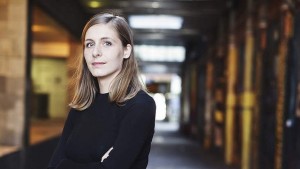 Last week the right-wing in Aotearoa descended into hysteria over Man Booker winning author, Eleanor Catton’s public criticisms of our National government. I hate to break it to so many of our right-wing pundits who know so little about so much, but Catton has been pointing out the failings of our current government for a while now. So why the right is so put-out by her remarks is beyond me. This is what Catton said at the ‘Jaipur Literature Festival in India that got so many on the right red in the face:

“New Zealand, like Australia and Canada, [is dominated by] these neoliberal, profit-obsessed, very shallow, very money-hungry politicians who do not care about culture. They care about short-term gains. They would destroy the planet in order to be able to have the life they want. I feel very angry with my government.”

Catton’s words were met with a vicious response with many on the right seeking to silence and isolate her, as shown by right-wing columnist Mathew Hooton who tweeted: 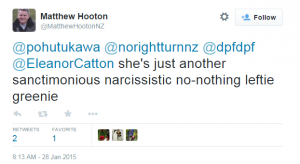 John Key our Prime Minster said he was disappointed with the lack of ‘respect‘ Catton showed for his government (as if she owed his Tory government anything?) and suggested she stop ‘mixing politics with some of the other things that she’s better-known for’. More recently when Key appeared on TVNZ’s Breakfast show he completely dismissed and belittled what Catton had said against his government:

This is not the first time John Key has dismissed a public intellectual (whose very job is to critique society and challenge those in power) and prize winning writer.

Last year John Key tried to discredit & minimize the words of Pulitzer Prize winning journalist Glenn Greenwald, who released the Snowden files. When Greenwald spoke out against our government and informed us Key had performed mass surveillance against his citizenry and lied about it. Key, in response called Greenwald “Kim Dotcom’s little henchman” and a “loser” and dismissed his claims.

If you cannot fault the message, attack the messenger.

But it was right-wing Radio host Sean Plunket who caused the most controversy when he called Catton an ‘ungrateful hua’, which sounds a lot like the widely and internationally used slang for whore: ‘huer’. Plunket, after he was done using vicious and sexist name calling to shut-down Catton, declared on national radio she was a ‘traitor’ to Aotearoa – as if calling into account those who hold the power was a crime against crown and country. I have not heard such a hyperbolic and jingoist claim in a long, long time.

What Catton said was not an act of treachery against Aotearoa,

It was an act of truth speaking.

Since National took office in 2008 homelessness has grown across the board and one of the biggest areas of growth is youth homelessness. Paula Bennett’s punitive and brutal welfare reforms targeted youth benefits; when young people who live in unstable and often unsafe homes are denied welfare where the fuck does National think they are going to end up? This act of targeting youth benefits sends a clear message to our struggling and vulnerable youth:

Our government does not care if you starve to death on the streets. But hey, all in the name of saving a buck… even if it is at the expense of our most desperate and vulnerable.

While so many of our politicians are hungry for more money and power, so many people living below and just above the poverty line are hungry for three meals a day and a livable basic wage – you can’t live off minimum wage in this country, any low-paid worker will tell you. I hate to break it to John Key but poverty is not a work of fiction.

With all that extra public money saved thanks to denying or forcing people off benefits and the gutting of our social safety nets, National can afford things like limousines and flag referendums, but apparently there is no money to feed the 280,000 kids living in poverty. Money well spent.

National’s unspoken but not so secret neoliberal capitalist mantra for governance for the last seven years has been: profit before people.

Catton also pointed out during her interview in India that our current government does not care about culture, and she is right.

I did five years of art school at AUT and I was a practicing artist for many years until I moved into political writing a year ago. It is nearly impossible to find any other form of government funding in the arts in Aotearoa if you don’t make the cut for Creative New Zealand. Generally, to even be considered for this funding you need to have an established practice. If you are not lucky enough to get government funding for your craft you are left (unless you parents can support you) working a minimum wage job (if you can even find a job in a global unemployment crisis) to support your vocation – what you love doing.

University of Canterbury senior English lecturer Dr Christina Stachurski agreed with Catton’s comment about the Government’s under-valuing of the arts;

“A recent action speaks for itself. National made a massive injection of funding for science and engineering at the University of Canterbury, and none for arts.”

National may show the value they place on fields such as science through massive cash injections into University science departments, but this does not stop them from denying scientific proof of massive global ecological catastrophes such as Climate Change. When I spoke to Christopher Smith, a Microbiologist who has recently graduated from Auckland University he told me,

“The truth is the science community has no doubt about climate change. We have no doubt this is happening right now. And the consequences of denying this are going to be, and have been, devastating.”

Yet, the National government continue to support and promote dangerously unregulated and unsafe practices such as Fracking to extricate natural resources from the planet. In 2012 US fracking generated 1,060 billion litres of toxic wastewater, much of which was dumped back into American waterways. But John Key insists fracking is safe, despite overwhelming evidence that it contributes to climate change and pollutes the planet. As Catton said,

“They care about short-term gains. They would destroy the planet in order to be able to have the life they want. I feel very angry with my government.”

It is John Key and his  government who are the real traitors to our country, not Eleanor Catton.

Eleanor is a Hero.

Catton spoke for the silenced majority – that is: the disenfranchised, poor, working poor and those who are marginalized by the dominant culture. This political underclass are the most brutally affected by Nationals’ money hungry attitudes, welfare reforms and neoliberal policies. The backlash against her serves as a strong warning to other people, particularly women, that if you speak out against those who hold the power in a public space you will pay a harsh penalty for your bravery.

“Courage inspires communities: the courage of an example — for courage is as contagious as fear.” Wrote the theorist and dissident Susan Sontag, “But courage, certain kinds of courage, can also isolate the brave.”

Catton’s example of principled action will always terrify those who hold the power, namely those who are part of the 1% and the super wealthy who benefit from massive wealth inequality, and self-serving politicians. John Key who is part of the elite 1% and stands to lose too much if cultural values begin to shift in favor of the 99% – in favor of the silenced majority.

Internationally regarded writers and intellectuals such as Catton have a legitimized power to disrupt the mainstream Medias’ narrative that panders to the right-wing and serves corporate interests – and in the process inspire others to do the same. This has sent the right in Aotearoa running scared, and this is why the backlash against her by political pundits and our own PM has been so swift and so vicious.