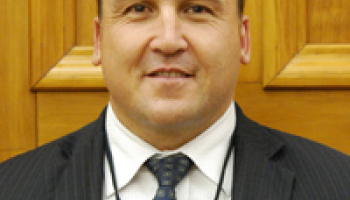 In the post election hangover, Voters may be a tad discouraged at how they handed Key almost total political dominance. Northland voters are blue, drained of the Maori vote who overwhelmingly stay on the Maori electorate, Northland is an electorate of Farmers and provincial businessmen. It’s bluer than the liquid they use to show tampon absorption powers on TV adverts.

But the scandal that has sunk Sabin will quickly spread as Key gets caught out lying again over timelines of when he knew what. The NBR have already caught him out. So whatever happens to Sabin, National will be damaged by association.

Whatever thick necked thug replacement National roll up as a candidate won’t meet the charm and dazzle of Winston Peters.

Either Winston runs, or he asks his good friend Shane Jones to step up. The By-election could be a vote on Key’s handling of Sabin and a chance to moderate the National Party.

It all depends on how willing the opposition parties are to being co-operative to take away National’s majority without needing United Future or the Maori Party.