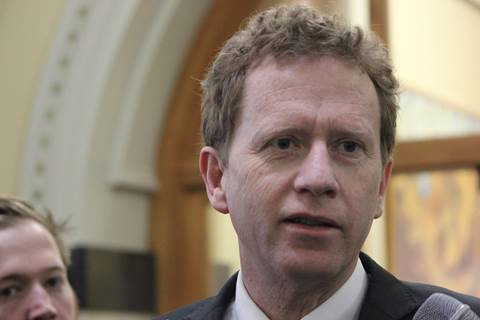 RUSSEL NORMAN’S DECISION to step down as the Greens co-leader reflects the party’s longstanding determination to reposition itself rightward. For eight years Norman’s personal energy and political discipline succeeded in turning aside the pleas of a clear majority of the Greens’ membership to break the party out of its left-wing ghetto. Only by exploiting to the full his party’s consensus-based decision-making processes was Norman able to keep the Greens anchored firmly on the left of New Zealand politics.

For eight years Norman strove to fashion a Green Party manifesto that was not only compatible with the Labour Party’s policy platform but would, to a remarkable degree, serve as its inspiration. His astonishing and largely successful mission to master the challenges of contemporary economics; an effort which allowed him to participate in policy debates with an authority sadly lacking in his predecessors, and to drag Labour along in his wake, is probably the most impressive achievement of his leadership.

It was this ability to render the Greens’ left-wing policies economically intelligible that allowed Norman to spike the guns of the Greens’ very sizeable “moderate” (for want of a better description) faction. The latter had demonstrated its power by installing Metiria Turei as co-leader – rather than the overtly left-wing Sue Bradford – following Jeanette Fitzsimons’ retirement in 2008. Had the rules made it possible, this same faction would have radically repositioned the Greens as an ideologically agnostic environmentalist party of the political centre; one capable of forming a coalition with either of the main political parties.

Norman was only able to appease these moderate Greens by holding out to them the promise of real power as members of a Labour-Green coalition government. Following the party’s record level of electoral support in 2011, and the narrowness of National’s victory, that had, at least initially, looked like a realistic prospect. What Norman could not have anticipated was the Labour Party’s self-indulgent descent into fratricidal factional conflict. Three Labour leaders in as many years destroyed any chance of a Labour-Green coalition. It also fatally compromised Norman’s political position.

The intrusion of Kim Dotcom and the Internet-Mana alliance only made things worse.

The coup de grace that finally extinguished the Green Left’s survival chances was the Labour Party’s very public spurning of the Greens’ (i.e. Norman’s) invitation to campaign together. Labour clearly regarded the Greens as mad, bad and dangerous to know, a judgement reinforced in the last few weeks of the election campaign when it became increasingly obvious to Green Party members that David Cunliffe was much more disposed to forming a coalition with NZ First’s Winston Peters than Norman and the Greens.

The final, ignominious defeat of the Left on 20 September 2014 undoubtedly caused cries of “We told you so!” to reverberate through the Green Party organisation. Combined with the slight, but unexpected, decline in the Greens’ Party Vote (the polls suggested, and the Green leadership were anticipating, an outcome of 14 percent-plus) the Labour Party’s abysmal performance, not to mention its unreconstructed hostility, when the chips were down, towards all things Green, rendered Norman’s position untenable. His fate was sealed.

It is highly unlikely that Labour fully grasps what a friend they have lost in Norman, nor how very uncomfortable their relationship with the Greens is about to become.

If Labour is lucky, the Greens’ transition from Left to Centre will be gradual. The supporters of Kevin Hague, widely tipped to be Norman’s successor, will be arguing that his accession offers the best chance of taking the party from its present position of political irrelevancy to that of permanent kingmaker in good order.

For those who favour a much more decisive break with the traditional Green “brand”, by electing co-leaders who can make a plausible case for representing a Green Party which has moved on from its radical left-wing past, James Shaw is the obvious choice. One has only to look at the official video of his maiden parliamentary speech to realise that this is a very different sort of Green to Russel Norman – and Kevin Hague.

Much depends on whether the moderates want to play softball or hardball. If they opt for the latter, then expect to see a full-scale challenge mounted for the Green Party leadership. That would not only entail the nomination of Shaw, but also of the fearsomely capable and articulate Julie-Anne Genter.

A Shaw-Genter ticket would constitute a re-branding exercise with a vengeance. Tellegenic, articulate, non-threatening and business-friendly, Shaw and Genter would signal in a way no other pairing could hope to replicate that the Greens are ready to take their place at the Cabinet Table – regardless of who holds the lease.

Under Rod Donald and Jeanette Fitzsimons, Russel Norman and Metiria Turei, the Greens belonged to the Left. Under its next set of co-leaders, especially if their names are Shaw and Genter, the Greens will belong to whoever offers them the best deal.

So long, Russel – you’ll be missed.