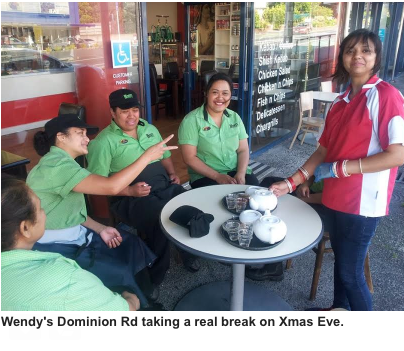 Union members will be bargaining for a new collective agreement in fast food and cinemas in 2015. The new agreements start from April 1, 2015.

Very soon we will be discussing what claims members want to make on the companies. Usually these claims cover thing like increased pay, breaks, and more secure hours.

Unite has already signalled to the company that secure hours will be a priority this year.

Some companies are behind the norm for workers in these industries and we want to bring them up. Few BK workers get training or are able to get off the minimum wage. 80% of current BK staff are on the minimum wage and many of them have been employed a decade or longer. Wendy’s workers aren’t guaranteed a 15 minute break and should be. Wendy’s workers are also routinely being cheated out of lieu day entitlements for working on a public holiday which must end.

Wendy’s workers have already voted to start industrial action to support their claims and the Dominion Rd store struck on Christmas Eve.

Once we have agreed on our claims then we will elect representatives to bargain with the company.

The minimum wage hadn’t been decided by the time this blog was written. In recent years increases have varied between 25 cents and 50 cents an hour.

We want a $15 minimum start rate and the living wage of $18.80 to kick in at the supervisor level.

The minimum wage increase will start on April 1 and all crew on the minimum crew rate of $14.25 will get the increase from that date.

We hope to improve that offer for union members, especially around secure hours. In previous negotiations all increases negotiated by the union have been backdated to April 1.

Union members have also been paid a special union member only payment of up to $200 for allowing the passing on of any improved terms and conditions to non-union staff.

On February 14 this year in Auckland there will be a national meeting of fast food workers to learn about how to bargain for a collective agreement and sign off on claims for the negotiations.

Volunteers who would like to be part of this years campaign are also welcome to attend. If you want to be there email Mike Treen (mike@unite.org.nz).

Special guests will be two McDonald’s workers from the USA who have been part of the fast food workers campaign in that country for “$15 an hour and a union!” The current minimum wage in that country is only $7.25 an hour.

This summer has been very hot and many companies simply haven’t had air conditioning systems up to scratch. Several stores at different companies have taken direct action to resolve the situation when working in the heat became simply unbearable. 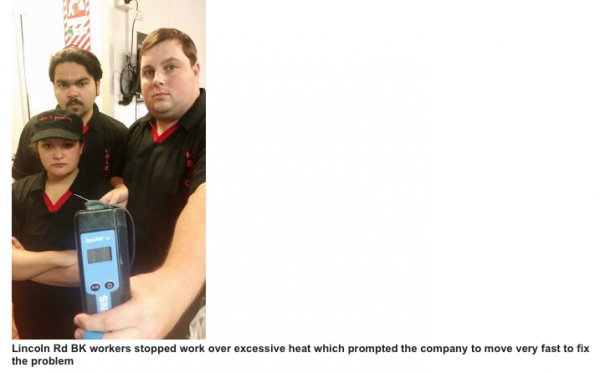 Much of the work union officials do doesn’t necessarily gain any special thanks. And nor should it. We are enormously priviledged to be paid to do a job that we love. Occasionally however we do get a message of thanks which is very appreciated. A recent one I am including below.

MESSAGE FROM A CARL’S JR WORKER

A day that define my side.

Being a witness on how an owner of a medium size corporation makes a decision that was about to affect migrants and local people. Without even wonder where his minimum legal obligations were or at least have the courage to tell his hard working employees the truth about what was going on.

He stole the opportunity for lots of people and took away their rights.

Workers couldn’t decide, comment and plan how to move on to a different job if they decided that was the best in their careers.

The decision was only to sell the company and recover investment regardless of how many people could be done redundant or face deportation. Owner hiding from his workers even when they ask him directly if the company was about to be sold. But he only hide away with the excuse that it was his right of confidentiality. But what about our rights? The only people that care at that time were the Union. From all the the people that was affected we believe that the best resources a company could ever have is and always be his people.

A bigger corporation taking advantage of the conflict. Then in the middle of chaos Unite NZ came as a hero to fight against the big corporations lies. And give back what workers wanted a fair treatment and a chance to recover their jobs of hundreds of people.

It was for us fresh new hope when all we saw was broken promises and lies from this dodgy company. For us seeing the Super Team from Unite. Mike, Joe, Gary, Milo and Yvette. Standing up the whole time. Giving us fresh air into this toxic environment the owner created.

Maybe our mistake it was working for him and trusted him that he will make the best decisions as owner and CEO of the company not knowing what could happen in a future time.

As one of the managers we give so much to the companies. As our teams gives nothing but their very best every day. We sacrifice a lot and worked together with our team. But in the end all of the efforts and hard work we all have been given was in vain and not taken into account by the owner.

If the owner was caring a little for his employees he had the opportunity to get a fair deal for their employees. He disposed us like if we were nothing. So he failed us, he failed his team that made his dreams come true to be a prosperous Company in NZ.

So we were so blessed to see the raise of all voices United. To see managers fighting together, to see crew standing up and fighting back for their rights. To see the media as a worldwide witness. To see people from other countries supporting us. To see families,employees and managers standing still as one big unite family.

All of us, Unite NZ. Standing up. Raising up. Fighting and speaking up.

This time we won the battle against the odds of losing and risking everything and not having something clear of what the end could be.

But in this whole painful period in our careers we will always remember the sincere and honest help from Unite. So we appreciate and will always be grateful for all the things Unite has helped us and looked after us like the most valuable things they have their people.

On behalf of every single employee at Carls Jr. NZ. God bless you all in every project you do. And to have always the strength and support to help those in need and release us from evil companies that only abuse and exploit their employees.

Thank you guys and the whole Unite super amazing team.