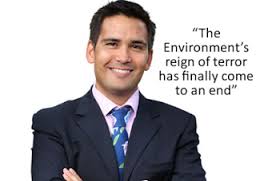 Welcome to what full spectrum political dominance means. The unprecedented majority the NZ public handed John Key at the last election means that with their sock puppet in Epsom, Key can do what he likes when he likes, and so the RMA will have its environmental requirements amputated for National’s developer mates to sprawl Auckland till Hamilton becomes its southern most suburb.

When global warming is making its impact felt like never before, National are taking a dump on our fragile environmental protections.

Get used to this ideological arrogance for the next 3 years.