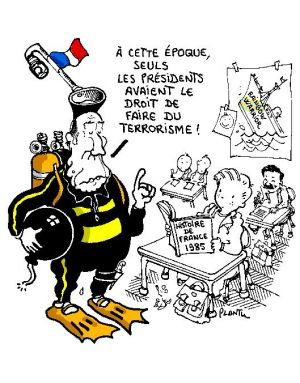 THIS TDB COLUMN has been prompted about Plantu and an interview he did last year before this week’s barbaric attack on the satirical French magazine Charlie Hebdo leaving 12 cartoonists, media people and a couple of policemen dead. And that’s without adding the latest double siege casualties).

Queries in response to an earlier blog posting with questions by Robert Atack and others on whether Charlie Hebdo ran any cartoons about the Rainbow Warrior bombing by French secret agents in 1985 have not been answered here definitively.

And then added in his next posting 37 minutes later: “This might be an opportune time to lay a [wreath] for Fernando Pereira. The freelance Dutch photographer, of Portuguese origin, who drowned when French Intelligence (DGSE) sabotaged and sank the Rainbow Warrior ship, owned by the environmental organisation Greenpeace, on 10 July 1985.”

An infamous example of state terrorism three decades ago this July!

But thanks to a correspondent in France, Geoffrey, while we have not unearthed any Charlie Hebdo cartoons on the Rainbow Warrior (I am sure there were), we have come up with the above cartoon by Plantu of Le Monde. His interview with Euronews promoting a doco about cartooning provides a broad context on the importance of the work by the talented and courageous Charlie Hebdo cartoonists – after they have been decimated by two fanatical jihadist gunmen this week.

Plantu’s cartoon in Le Monde quotes then President François Mitterrand as a frogman-dressed teacher giving a subsequent history lesson about 1985: “At that time, only presidents had the right to carry out terrorism!”

For more on the Rainbow Warrior affair itself read my book Eyes of Fire: Last Voyage of the Rainbow Warrior (Lindon, 1986) and the memorial edition (Asia-Pacific, 2005), and my latest work Don’t Spoil My Beautiful Face: Media, Mayhem and Human Rights in the Pacific (Little Island Press, 2014) – especially the chapters on climate change refugees and the 20-year legal battle to have the French spies’”guilty” pleas broadcast on television.

Among Plantu ‘s cartoons on the Charlie Hebdo atrocity is this one:

Here is an extract from the Eurovision interview script or you can watch the whole programme live.

EURONEWS (24 September 2014): Plantu is one of France’s best known cartoonists, having been drawing for the national daily Le Monde for the best part of 30 years. Euronews caught up with him in Brussels where he was promoting a documentary about political cartoonists, some of whom risk their lives to get their views across. It is called Caricaturistes – Fantassins de la Démocratie.

Audrey Tilve for EURONEWS: This documentary, is it the continuation of the work you started in 2006 when you founded the association Cartooning for Peace with the UN? This association now has 109 cartoonists in it, I think. And you are one of the 12 who appear in the film. How were the other 11 chosen? Why did you chose them?

Plantu: I left the decision to the director, Stéphanie Valloatto, and the producer, Radu Mihaileanu. They knew my work and wanted to highlight what we have in common, us cartoonists. So they moved between an artist from Burkina Fasa like Damien Glez , or someone from Ivory Coast, or this artist from Ramallah, a Palestinian. It wasn’t a case of an in-club of cartoonists who all think the same way. No, they think freely, like journalists. So it should resonate with journalists and especially with the people of the planet who hear all the debates and subjects which are touched on in the film Caricaturistes – Fantassins de la démocratie.

Euronews: The trailer features a Syrian cartoonist who had his fingers broken. Your association Cartooning for Peace, is a network of artists, it highlights their work, but can it protect them?

Plantu: When the Syrian cartoonist Ferzat was tortured, they put a plastic bag over his head and systematically broke all his fingers. He was in plaster for months, obviously, as we see in the film. We have the means to make this known. And when he comes to Europe, or elsewhere, and he takes part in debates it really spotlights his resistance work. The word fantassin (soldier) in the title really reflects that.

Euronews: Moving onto a very current issue in the news, which is in all our thoughts, including in yours… Islamic State. Here is a cartoon you drew recently. We see the leader of a petrol-rich monarchy tossing dollars at Obama to pay for his coalition against the jihadist group. We understand that you’re denouncing a sort of hypocrisy. But who are the hypocrites: the Gulf monarchies like Saudi Arabia who have sponsored the Salafi Movement for years, or the West which has looked the other way?

Plantu: These questions have exactly the answers you expect. It’s true that the advantage of working for Le Monde is that I can pick up my phone and tell my editor I’m fed up with the Arab League. Yet again we’re going to say that the Americans are intervening in Arab countries, in Iraq, and as for them, what are they doing? They’re sleeping, what are they doing?

This guy asleep on the cushions, he has to understand that three-quarters of the world’s Muslims are moderates. And what’s he doing? Sometimes he hangs out with guys who are a little less moderate. And suddenly Obama picks up his phone and says: Hey it would be good if you come and help us in Iraq. But the guy, he’s juggling three lots of people, but OK! Let’s go! Let’s go for your Muslim brothers!

Euronews: Here’s another of your cartoons, on another serious subject. The Ebola outbreak in West Africa. This epidemic started at the beginning of the year and it’s only now that the international community is properly mobilising. Is it because the outbreak is in Africa that we have taken so long to react?

Plantu: Of course. That’s why, at Cartooning for Peace, we are in touch with all the cartoonists in Sub-Saharan Africa, because they give out enormous amounts of information. Of course, there is political drawing, and drawing on the web, in the newspapers, and then all the drawings by artists working for health organisations, for Unicef, the UN, etc who try to promote the work of these wonderful people who are in contact with Africans.

Euronews: And can you explain this next drawing? I’ll just say in two words that it’s about Ukraine and perhaps about the way Europeans look at what is happening, and then let you take over.

Plantu: I think that as Europeans, we have something to say about Kyiv, about Ukrainians. But also, I have to say, you know a while back they caught onto things and then they said: “We’re going to ban speaking Russian.”.

Me, I thought they were mad. Banning Russian! And that’s just what the others were waiting for and bam! And that’s why I drew them a bit alike, because I think there are great people standing right beside people who love Russian culture and the Russian language in Ukraine, there are great people on the Kyiv side who are trying to push a lovely idea of Ukrainian democracy and then there are idiots on both sides. And I think that sometimes we Europeans have palled up with people who only want one thing, to flatten the Russians, but I don’t want to do that at all.

I don’t like Putin, I don’t like his politics, but at the same time, we’ve made fools of the Russians several times. We made them swallow a lot in Libya, when we intervened, and so you have to understand how the Russians think and sometimes we fall into cliches.

Euronews: We can’t not talk about the EU, which you have often attacked. And you did a drawing about it in a drawing in 2001. So 13 years later, is the EU still a snail [as you depicted it then]?

Plantu: Yes it is, absolutely. And OK, now there are 28 member states and since 1945 there’s been no war between us. And perhaps that’s because we have this thing called the European Community?

Now, it’s called the EU and that’s the reason I go on taunting the European Commission. And I’m working closely with European leaders so that in two years, and I think this is really worthwhile, we’re going to have a meeting of 28 cartoonists from all the 28 member states, because it’s true that we have to tease European leaders, and it’s also true that we have lots to say about the why, how and how much we love Europe despite it all.

Finally, the last word – or image, rather – on the Charlie Hebdo attack, the European Union and humour- “another provocation!!”: 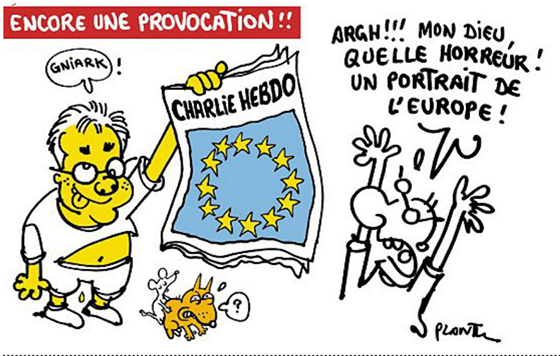