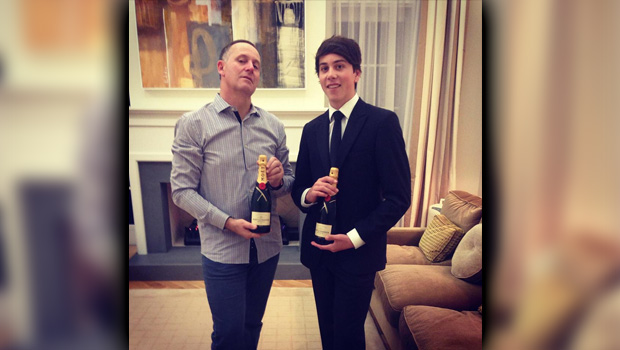 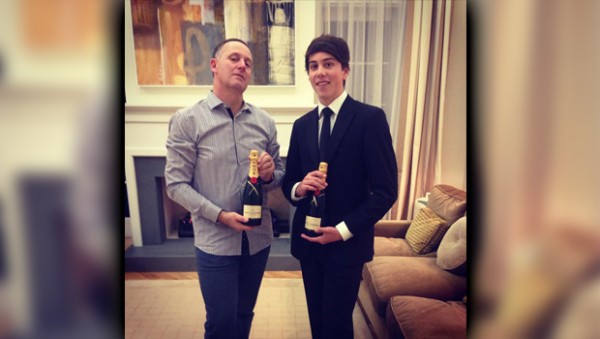 Toward the close of New Year’s Eve Eve, this post from TV3’s excellent man about various towns, David Farrier, happened to percolate across my newsfeed.

It’s a photo of a temporary memorial called Arlington West that’s erected every Sunday on California’s Santa Monica beach by a group called Veterans For Peace. It’s dedicated to US servicemen killed during the course of the Iraq War, with each of the thousands of crosses in the photo representing one of the fallen. (As an aside, the plaque next to it points out that while this monument to the American war-dead takes up an area some 141 feet wide by 310 feet long, if done at the same scale for the Iraqi dead … it’d be some 141 feet wide by 12.8 *miles* in length)

However, it’s not just *any* photo of a war memorial and contemplative space … it’s also one of Max Key’s holiday snaps.

As the lad himself puts it, “Fun”.

Now, when this came up for debate amidst my friendcircle, the point was made that as a general rule, the spawn of politicians we don’t like shouldn’t ordinarily be singled out for especial targeting merely by virtue of their parentage. We don’t usually get to choose those who contribute our patronymics and chromosomes, as you may have noticed.

The same gentleman then followed this up by asking the rhetorical question “If this was your kid, would your reaction be different?”

And I have to say (leaving aside, for a moment, the fact that I’ve never really considered blogging about my unborn presumptive children/hypothetical-next-generation-of-naescent-Rolinsonian-political-supersoldiers before) … yes, yes it would be a bit different. I’d be giving him a clip round the ear – something that, I can’t help but note, you aren’t *usually* allowed to legally do to somebody else’s kids. (Particularly given my rather amusing previous run-in with Key’s diplomatic protection squaddies…)

In any case, while 19 is getting a little old to run the excuse of youthful exuberance and indiscretion; the reason why Max Key editorializing a memorial to Western troops who’ve died in Iraq as “fun” is arguably comment-worthy, is the fact that at the same time Max is shooting photos amidst the sand … his father has our own military gearing up for a deployment to a new shooting war *also* in Iraq.

I’m not always a believer that you can judge too terribly much about a given father based around his son’s arguable misconduct (because otherwise there’d be some seriously, seriously unfortunate conclusions to be drawn about The Rev. Rolinson based the continual stream of *ahem* “eccentricity” I indulge in) … but if Max Key is *this* blase about America’s war-dead from Iraq, we can only wonder whether this has anything to do with John Key’s potentially somewhat cavalier attitude to putting our men and women in harm’s way in the same foreign country.

Let’s hope Key the Elder possesses a little more perspicacity than his son does about the gravity of what it means to die in a far-off land in service to your (or, in this case, someone else’s) nation.