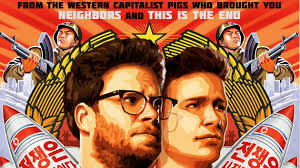 Did it all just seem a tad too weird? A country that barely has any internet connection hacking Sony to embarrass and expose them? From the very beginning this smelled wrong didn’t it?

For a country that can’t seem to afford auto-cues for their news readers, managing to hack Sony seemed a bit like the American Rugby team thrashing the All Blacks by 200 points.

It now turns out that North Korea probably had nothing to do with the Sony hack and that it may have been a disgruntled former employee or hacking group who has framed North Korea.

An international incident has almost been allowed to erupt over a stoner film made by James Franko and Seth Rogan. One needs many a puff on the bong to comprehend the magnitude of that.

On a far more insidious note, those within power looking for a new manufactured False Flag to launch their machinations from have just learned a new phrase – False Hack. Framing another country for a Cyber attack could become all the rage in 2015.

One thing the Sony hack gives us though is an insight into the manner in which top Hollywood executives talk to each other – it certainly makes Kim Dotcom’s email seem far more plausible.