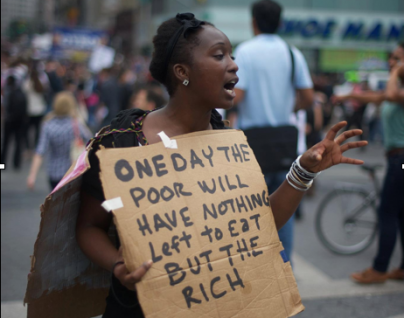 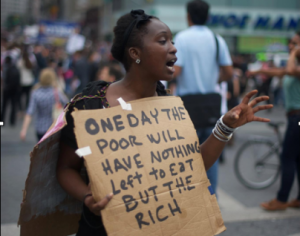 I went to WINZ last week to claim my transition to work grant because I’d finally found a job. I didn’t get the grant in the end even though it is, or should I say, was my entitlement but this is beside the point. When a security guard buzzed me into the WINZ office, (after the shooting of two WINZ case workers down in Ashburton they have tightened their security) I walked up to the counter where a young Pākehā guy who I will call Paul*, was in front of me pleading for an appointment.

“I have not eaten in two days, I’m so starving. I need a food grant” Paul told the receptionist as he took scraps of paper from his pocket that turned out to be his bank statements revealing a zero balance and a maxed-out credit card.

“I’m sorry you should have made an appointment or budgeted better.”

Despite the receptionist’s callous, and in my opinion brutal, response Paul kept pleading over and over again until finally the security guard asked him to take a seat.

I said to the receptionist “You just blatantly lied to that you guy. There are always emergency appointments for desperate situations. Was he not desperate enough for you?” She ignored me and asked for my name.

I sat down one seat in front of Paul who had just been turned away from WINZ and told him about the emergency appointments that, seeing as it was midday, should still be available. He thanked me and again went up to the receptionist, repeated what I had told him, and got an appointment that he would most likely wait several hours for.

My heart went out to this guy.  I have been in his situation before, begging for a food grant at WINZ. It can be a humiliating and frustrating experience.

Paul came back to his seat behind me and I heard him make a phone call. When someone picked up he said “I think I have got a food grant we will eat food tonight, at least.”

I felt my eyes well up.

I turned to this guy and asked as politely as I could, “Do you mind me asking, how’d you get so broke, babe? No judgement – I hate the WINZ system. I write for a political blog I’d like to hear your story.”

“It was either food or power. This month we choose power because of the penalties you have to pay if you miss payment.” Paul said.

I just want to repeat the part where Paul said “this month.” Clearly this was not the first time he has had to make the decision to go without either food or power.

“You try living off 250 bucks a week and tell me how to fucking budget?” Paul said to me.

If anyone out there can tell me how people are meant to live off so little in one of the world’s most expensive cities without forgoing basic necessities like food, I am all ears. As Nadia Abu-Shanab, who at the time was working for Action Against Poverty said in May of this year,

“We work with people every day who have been squeezed to the limit by a punitive approach to beneficiaries and the unemployed. We have seen incomes drop significantly in parts of Auckland. This winter, an untold number will face freezing homes and empty stomachs.”

Nadia makes clear what we already know: Paul’s situation is not unique in Aotearoa. There are thousands struggling to survive in a city where rents and food prices have soared. Wages have not increased to match these rising living costs. Despite this, our government persists in telling us we just need to work harder – as if hard work was a magic trick for fixing a broken system.

WINZ only gives you “just enough to survive on” as my first case manager said to me four years ago, after graduating university. Paul and Nadia’s words should be a reality check: welfare is not enough to live on for the majority of unemployed people dealing with the massive global job crisis.

Our benefit system’s ethos of “unemployed people only deserve just enough to survive on” is in itself problematic. Regardless of your situation, if you need help from the state because you lost your job, can no longer work due to disability, injury, or mental health issue or for whatever reason – don’t you deserve to do more than just survive?

When you are vulnerable and down, you have the right to be treated with dignity, respect, compassion, and kindness by whatever government is in power. Don’t you deserve to know you are loved and valued no matter how much profit you are or are not turning over?

Instead of compassion from our government, they are leaving our most vulnerable behind as blogger and advocate for Action Against Poverty Katie Dickie-Davis wrote recently for The Daily Blog:

“Last week people queued at the doors of the Auckland City Mission. They are people that are living without enough income to afford the basics let alone the extras we as a society have come to expect at Christmas. Extras like presents for the children and a feed on Christmas Day.”

Aotearoa has never been so unequal. The OCED recently released a landmark report showing that economies the world over are “being hamstrung by growing inequality  – New Zealand was the worst effected,” as the Guardian reported.

John Key has dismissed the report. As Dickie-Davis went on to say

Just over a week ago I was walking late at night to a friend’s apartment at the bottom of Queen Street, when a group of young teenagers crossed my path. They were homeless. I ended up talking to a sixteen-year old girl who had been on the streets since she was fourteen. Her parents do not want anything to do with her she told me, and now she is pregnant and has no idea what she is going to do. This young girl told me John Key does not give a fuck about her and while laughing and throwing her head back she acclaimed “let’s put bombs in the beehive”.

We are one of the few developed countries in the world that has no national strategy to combat homelessness. Youth homelessness has grown since 2008 and Paula Bennett’s punitive welfare reforms targeted youth benefits.

The National government is sending a clear message to young people who are homeless and others struggling to stay above the poverty line: we don’t care if you fucking starve to death.

I wrote at the start of this blog that I have finally found a job! Not some crap low paid job either. For the first time I am being paid a liveable wage and I am using all those degrees I earnt. I have been hired as the Editor of Debate magazine at AUT. I feel incredibly humbled to be working at AUT in a position which will allow me to connect daily with students and hear their voices. I am at the very start of a rebrand and relaunch of the magazine, much of my time will be dedicated to seeing this through. I will no longer be blogging for The Daily Blog as frequently as I have done in the past. I hope to contribute to the Daily when I can.

Thank you to all the people who believed in me, gave me praise and yes, criticisms. Your support and robust debate has been invaluable. There are no words I can use to express my thanks to Martyn who spent at least 6 months urging me to write for him. Thank God I finally got over my lack of self-belief and committed to writing for The Daily Blog just under a year ago. It has been an affirming and incredible experience for me, writing soothes the soul.