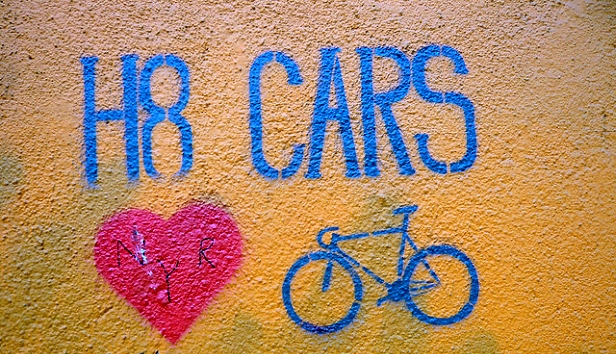 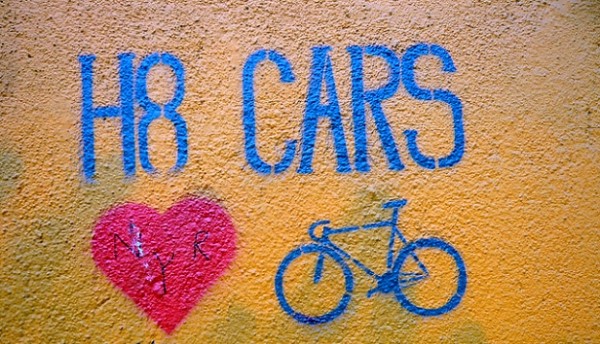 Car is King in Auckland, city of cars. It’s been that way since the 1950s, but the massive construction zone that is the current North Western Motorway expansion, confirms Auckland’s urban form as dominated by the car, tarseal, concrete and steel.

The $2 billion Western Ring Route cuts a swathe through schools, communities, urban forest remnants, open space, and a marine reserve, and is a clear indication of priorities, but will leave negative impacts for generations. Fast tracking this motorway building by classing the Western Ring Route a ‘Road of National Significance’, reinforces Auckland’s car culture, diverts massive funds from other projects, and creates megalithic flyovers dwarfing all human scale.

85% of Auckland’s journeys are by car. About 85% of those journeys are to work, and 90% of those are single occupancy vehicles. We have one of the highest car ownership rates per capita, in the world. Auckland’s car fleet grows by an additional 15,000 cars per annum. Our urban form is laid out for car driving – and obviously so is our public investment.
Past, hard won public transport improvements, such as rail redevelopment and the Northern Busway, are even less likely to be repeated with a government that’s hostile to alternative funding sources and public transport per se. But the structural arrangements behind Auckland’s existing public transport services are also problematic (competitive, and relatively deregulated) and do little to improve the confidence of Aucklanders in alternatives to the car.

The mad, bad car dependency also looks to be entrenched with the fast tracking of ‘Special Housing Areas’ (SHAs) which leave no time and give no care, to integrating land use and transport to avoid more of the car based sprawl that has shaped Auckland so far.

My hometown of Kumeu, 35 km from the city centre has a motorway extension to within 4kms of its strip-development heart. We’ve got a motorway almost to our community’s door. Of course almost as soon as it was completed, it’s been congested and blocked with induced traffic. But the alternative bus service winds through slow suburban streets for most journeys to town. For anyone that’s not a committed public transport user, these bus services will never compare with even the slowest journey by car.

The SHAs propose an additional 2,500 houses for Kumeu, and several thousand residential sites are already under construction in the area. Auckland Council plans for an eventual extra 80,000 houses and 200,000 more people to live in the current Western greenfield periphery of Auckland.

But the $2.5billion already invested in the Northwestern motorway corridor excludes a dedicated, congestion-free public transport busway. The concession to bus passenger travel amidst this concrete jungle, is a bus shoulder lane for 4 kms of the journey by 2017, and another 4 or so kms by 2021. Current consultation on the local bus service review indicates no sign of dedicated busway for generations.

In the meantime, the existing, dedicated, congestion-free rail corridor, stations and line, right in the heart of this development area and the SHAs, lie idle. The railway station at Huapai/Kumeu sits empty. Auckland Transport is about to withdraw services from Waitakere to Swanson. We must be the only communities in the region facing a worsening public transport service rather than an improvement.

Officials, and others, suggest that our area should just wait for the Northwestern busway. Pragmatism tells us local PT users, and residents, that it’s better to use the existing resource invested in rail that’s available now.

Politics is at the heart of transport investment decisions. The politics of Auckland transport shows a disregard for PT, for current and future PT users, a lusty love affair with the car and bad planning.

We’re not getting a dedicated bus corridor amidst the country’s biggest roading project on the Northwestern motorway. There is no plan for rail services where the line and stations currently exist. That’s not a matter of ability, but a matter of political will. It looks like hell to me.