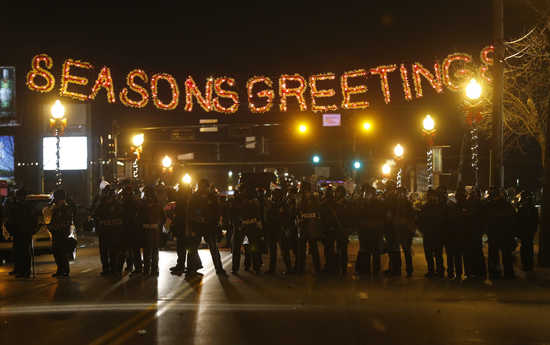 Why do white men fear young black men? Why in this country do we continue to struggle with this?

Asked by an old black guy in Ferguson, the crafty questions were answered by an abrupt end to the story to cut, again, to a white Australian dude, grieving the loss of his mate in an inherently dangerous rich white man’s sport

The messaging was very slick. The day before, I’d almost been moved to tears about the loss of this talented young man who’d died doing the thing he loved. But then I remembered: It’s sport. It’s blood sport and aside from the poor animal whose hide is used to make the ball, at least they hurt no one but themselves.

Cricket is supposed to be dangerous. People are supposed to get hurt. That’s why they use such a hard ball. That’s why they’re allowed to throw it at each other’s heads. The idea behind a bouncer, I’m told, is that by cowering behind his bat, gloves, pads, box and helmet to protect his vulnerable parts, he might negligently get “out.” This unfortunate event, the knocking off of the bales or being caught after the ball has hit the bat, behind which the man cringes, is very humiliating. In the even more unfortunate event of this happening before he has scored a run, the loser will be lampooned on global TV with a cartoon duck and derisive music.

Far better is the batsman who bravely advances down the wicket when he sees the bouncer. A big man, rich enough to spend hours in the gym. He’s got a big stick made out of willow, specifically designed to let him hit the rock hard ball as hard as he can. He’s angry, too. Who wouldn’t be when some big dude is throwing a missile with deadly force at one’s head? He gets it on the half volley, sending it back so fast it can’t be seen. It hits the bowler’s outstretched hand, splitting it open before running off to the boundary. It’s quite deliberate. It’s his best shot of the day. The crowd cheers.

It’s played again and again on replay, concentrating on the look of his face as he drops to his knees clutching his wounded hand. Blood is evident on his white pants. Another camera shows the coaches, one punching the air, the other yelling angrily into a portable radio. Another camera shows the look on the face of the devastated captain as the ball hits the boundary.

If it wasn’t dangerous, no one would do it. They’d be playing tiddly winks instead. And, no doubt, the tiddly winks action that would get the greatest coverage and immortalised on YouTube would be the footage of the day a Kiwi managed to hit a Wallaby in the eye.

The shameless attraction humankind has to watching daring feats of danger and skill is something many struggle to understand and most refuse to admit. The danger is what draws the eye. It’s what draws people to dangerous sports.

The media attention given to this death will be fantastic for cricket with this stark reminder of it being a blood sport. The slick messaging of the moneyed sport is on every local channel. No one says that this death is great for the game. Injury and indeed death happen with statistical regularity. This was the second high profile head injury this month. No one can say that broken skulls aren’t an accepted part of the game; an accepted and indeed embraced risk. No one says that people are supposed to die every now and then. It’s what makes the game exciting. It’s what gets in the news. It’s what promotes the brand. Now rugby player can’t call cricket players poofters, for a while at least. The sponsors will be very happy. They pay the sport and the TV channels which screen the “news.”

Participation in sport of this kind – even by being a casual watcher – involves being complicit in crimes. Just as the paedophile who only looks at pictures creates a demand for abused children, the blood lust of those who watch rough sports creates a market for danger which hurts and kills people.

This isn’t a call for greater enforcement of legislation, it’s simply calling things what they are. While touching can be consented too, it’s not possible to consent to being injured, wounded, maimed or killed. It doesn’t matter if it’s on the cricket field. Cricket players can get on the field and say they “consent” to getting their skulls broken, but that’s not how it’s supposed to work. It does, of course. It works every day. As a society we condone it and fund it from early childhood.

I did it. I still do it. I nurse my neck, broken decades ago, my shattered scaphoid predicts the weather with barometric accuracy and, forty years later, I still moisture the skin of my thigh which now does service over my gnarled knee. I remember surgeons who disapproved, but shrugged in agreement when I reminded them that it was supposed to be like this. I wouldn’t have been on the table and they wouldn’t be standing beside it with a sharp knife otherwise. These are our choices.

And somehow these utterly predictable, paid for and earned from events are tragedies. If there was no danger in motorcycle racing, cricket or rugby, no one would do it. No one would watch it. It’s supposed to happen. Participants might not ask for it, but they offer their legally invalid consent.

Meanwhile, buried deeper in the news a little boy plays with a replica pistol in a playground. He didn’t consent to being born into danger. He didn’t consent to being on the statistical hit list of a largely white police force serving a dominant white culture. He didn’t ask to be born into a culture where his toys would be indiscernible from the real thing; a culture where the real thing has become a toy. He didn’t ask to be shot by some white cops who fear black men.

The messaging is all wrong though. He’s black and he’s poor. He’s got a gun. He’s going to elicit as much sympathy from white Americans as a 130kg dude who continues to advance on a cop who’s repeatedly shooting him. Neither of them were rich talented white guys tragically cut down in a “freak accident” on a manicured pitch and elevated to second spot on the news.

Meanwhile, the old man’s questions never get answered and a boy dies in Palestine, squeezed out of the news. It’s just not cricket.