Isn’t it interesting that Patrick Gower – who made his partisan feelings crystal clear on Twitter on 29 May with this extraordinary outburst;

“Lalia Harré – you make me feel sick by how you are rorting MMP http://www.3news.co.nz/Opinion-Hone-and-Dotcoms-grubby-deal/tabid/1382/articleID/346334/Default.aspx#ixzz334vE4jKO Same goes for your pals Hone, Dotcom, Minto and Sykes.”

– is also the same one who interviewed Laila Harre on Saturday, 22 November, on TV3’s “The Nation”? What measure of  neutrality did “The Nation’s” producer, Tim Watkin, believe that Gower possessed, to run that interview?

Quite simply, any reasonable individual would have arrived at the conclusion that Gower should have disqualified himself and the role given, instead, to the highly talented Lisa Owen.

Notice how Gower was very well behaved during the interview, when face-to-face with  Harré?

But once Harré was off the set and he was with the panel (Mike Williams and Matthew Hooton), the gloves and mask came off and Gower’s vitriol issued forth;

“… I think there’s two words for what we saw over there, before and that’s called in denial. Hmmph!”

“… She’s not going to go in with the Greens, she’s betrayed them. Labour won’t have a a bar of her. No chance of Laila Harré coming back to Parliament. And that’s why you see this sort of denial from her. She’s got it horribly, horribly wrong and she still can’t admit it.”

It should be noted that neither Williams (an ex-Labour President) nor Hooton (a right-wing commentator) could possibly comment impartially on the Mana-Internet Alliance. Both Labour and the Right had a unified agenda to smash Mana-Internet at the election (See: 2014 Election – Post-mortem Up-date). There was simply no attempt at balance with the panelists or the the host-interviewer (Gower).

What is abundantly clear is that Gower seemed to lack a certain inner fortitude to say the things he did to the panelists, to Harré’s face.

This was part of  an ongoing, unrelenting onslaught against the Left. The same dirty media that saw right-wing, self-professed “media personalities” appointed to host political debates, despite public opposition and cries of partisanship; 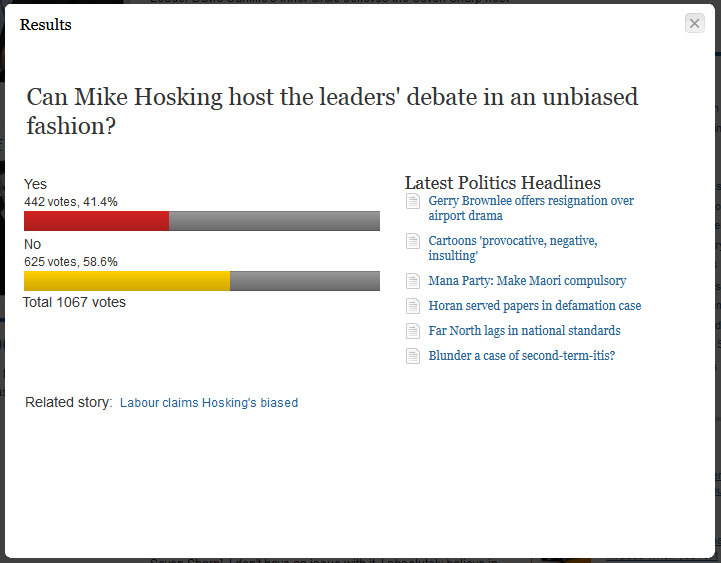 There was good reason for public disquiet over Mike Hosking hosting one of the election leadership debates. His political allegiance was already well known;

An example of media bias was clearly shown over the issue of two holidays by two party Leaders. As I wrote on 24 July;

The recent non-story on David Cunliffe’s three day holiday should be proof-positive that the mainstream media (msm) is fixated on pumping out as many “bad news” reporting as can be generated by a headline-seeking; advertising-driven; lazy corporate-media system.

We’re all aware that whilst Cunliffe took a three day break (I’m surprised he bothered to come back, instead of telling this country to go get f- – – – – !), our illustrious Dear Leader was off on a ten-day holiday, sunning his pale, $55 million arse, on a Maui beach in Hawaii.

Whilst the media did indeed mention that salient fact (albeit in passing), it was taken as a given that the leader of a party polling 50%-plus in the polls is entitled to a holiday.

Meanwhile, the leader of a mid-twenties-polling (?) Party is – it was hinted – not entitled to any such break.

The subtext was blindingly obvious; success breeds reward. In this case, a warm, sunny Hawaiian beach.

And failure means you don’t deserve a single damn thing, so get-back-to-work-peasant!

(See:  When the mainstream media go feral: A tale of two holidays)

Perhaps the most outrageous, recent political “hatchet job” was the Herald’s  character assassination scheme launched against David Cunliffe, using unproven (and later discredited) allegations from immigrant-businessman, Donghua Liu. The story behind Liu’s shonkey allegations; a 13 year old letter; and information strategically released by National minister, Michael Woodshouse, to Herald and TV3 journos, was nothing less than a disturbing abuse of ministerial power and media influence. (See:  The Donghua Liu Affair – The Players Revealed)

When a party leader continually receives bad press (eg; condemnation over taking a 3 day break; the colour of the scarf he wore; a manufactured “scandal” regarding a 13 year old letter, etc) what is the mainstream media telling this country?

At one stage the level of attacks against Cunliffe descended into pettiness and farce when, on TV3, on 24 July,  TV3’s Tova O’Brien ran this report on their 6PM News bulletin, about Key’s face appearing – photo-shopped – on the cover of the “Rugby News“;

However, stuck at the very end of the video-version of the story, was this oddball, juvenile parting-quip by O’Brien;

“So once again the blue team gets one over the red team. Yes, it’s cringey, but it’s left Cunliffe looking whingey.”

(See: When the mainstream media go feral: the descent into sheer farce, according to Tova O’Brien)

Despite the fact that the story was ostensibly about Key getting his face photo-shopped onto a magazine and scoring some free election-year publicity – a supposedly well-educated, “impartial” journo still managed to somehow insert a childish comment about David Cunliffe. That’s despite the fact that Cunliffe’s comments were much more restrained and measured than the criticism  made by Winston Peters in the same video.

So there we have it, folks. Even when the story is about John Key – a silly little journo still managed to turn it into a swipe at David Cunliffe.

Such was the mainstream stream leading up to the election on 20 September.

Returning to Patrick Gower, there are three questions I would like to pose to him;

1. Why is it that Gower condemned the Internet-Mana alliance as “sickening” – but not the ACT-National deal in Epsom, with the same intensity?

3. Why was Dotcom’s funding of Mana-Internet such a big deal worthy of condemnation – but millionaires funding National and ACT is barely noted, in passing, if at all?

Otherwise, Patrick, this is not impartial, intelligent journalism.

It’s not even close.

It was funny for the first thirty seconds. Now it’s just lame.

Message to journos: don’t be lame. It’s not cool.

For an excellent interview with a political leader (whether Labour, National, Greens, whatever), check out TVNZ’s Q+A today (22/23 November), where veteran reporter/interviewer, Heather du Plessis-Allan interviewed new Labour Leader, Andrew Little. This is how an interview should be conducted; the host asks the questions; the guest is given time to respond, without interuption.

TV3: David Cunliffe owns up to getting it wrong

When the mainstream media go feral: the descent into sheer farce, according to Tova O’Brien