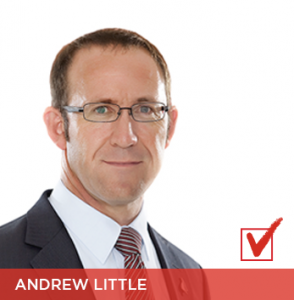 The victory lap by Caucus over the members choice of Cunliffe has ended and the new leader of the Labour Party is Andrew Little.

The dullness and caution of the latest Leadership race will be served well by Andrew,  he was the leader of the EPMU, one of the most conservative Unions in NZ, so don’t expect revolution, expect tepid evolution. With MANA killed off, Labour can now try and out-gallop the Greens to the centre because activists and members can’t politically go anywhere else so expect National lite for the next 3 years.

Issues off the table:

TPPA – Economic Sovereignty has too many syllables for the sleepy hobbits of Muddle Nu Zilind, so expect Labour to roll over on this.

Gender Equality – shhhh. Chicks need to get back in the kitchen, gender equality will be well off the agenda in the pursuit for muddle Nu Zilind. Rape Culture will never pass any Labour MPs lips for the next 3 years.

Mass Surveillance – will remind too many Muddle Nu Zilinders of Kim Dotcom, so expect lip service about civil rights blah blah blah, but Labour will gain some bullshit review as their price to sign up to Key’s new powers.

Poverty & Inequality – It’ll all be vacant aspiration stuff now, so if poverty is ever mentioned, it will always be ‘child’ poverty because children are more sympathetic than dirty bludgers. It’ll all be ‘hand up’ stuff not ‘hand out’.

CGT – Seeing as home ownership is the only fake wealth most NZers can generate, as part of the vacant aspiration jig Labour will now dance to, a Capital Gains Tax is gone.

Issues on the table:

Bash some bennies – In a respectful way of course, dress it up as a new ‘social contract’ and stick to the work is good for you mantra.

Tough on Crime – Always a great vote winner, demand lots of mass surveillance for prisoners after they serve their sentence.

Technical Labour Law changes – EMPU are very conservative so expect a lot of technical changes to Labour Law that is agreed to first by the bosses.

Maori Bashing – Nothing gets Muddle Nu Zilind happier than a bit of good ole fashioned Maori bashing, Get Kelvin Davis to do some speech criticising Maori men for domestic abuse and sexual crimes and dress it up as leadership, Pakeha love it when a Maori criticises other Maori.

Drilling and mining – expect more of that.

Labour can win over muddle Nu Zilind if they just keep it stupid simple.

New Zealanders don’t respect intelligence, they respect confidence, and one thing Little has in spades is that he is comfortable in his own skin. What is most important now is the pretence of unity, to this end Little would be smart to make deputy a co-leader position with Nanaia and Nash as representatives of the factions Little needs to keep on side, Team Robertson isn’t going any where so he doesn’t need to reward any of them. Boiled meat and 3 vege politics will be the new norm as Labour aims to not spook the sleepy hobbits with ideas that are too big. Expect a low imagination threshold something like ‘Jobs, Homes, Education’. This is an electorate that just electorally rewarded dirty politics and mass surveillance lies, so the issue isn’t the argument, it’s the self belief of the person lying that attracts NZ voters.

It may be boring, it may be dull, but it will probably delight muddle Nu Zilind. All we can hope for now in progressive politics is a less mean version of the National Party.