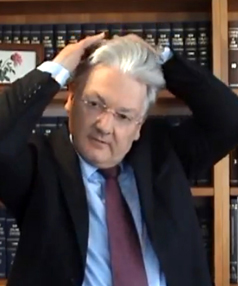 If your answer was something intimately connected to the person of Peter Dunne … then you’d be right.

Last night, P-Dunney decided to bring his comedy and/or hair stylings to the twitterverse; penning a potentially somewhat ill-advised tweet in which he compared my beloved New Zealand First to an American organization known as the KKK.

Anyone would think Dunne had forgotten that time he went into coalition with *this* man.

Now, this isn’t the first time Dunne4’s come out and tried to label NZF as a bunch of white supremacists… but the thing that really REALLY gets me about what he’s said this time (i.e. the joke about suddenly opening up membership to non-straight and/or non-white folks) is how patently inapplicable it is to *our* Caucus; yet how easily and directly relevant it is to United Future’s.

United Future’s, after all, is easily the oldest and whitest Caucus in the House; counts among its former MPs a man who believes interracial relationships are a social evil on par with alcoholism (and consequently ought to be banned from being depicted in the media); and possesses a leader who once memorably described legal provision for civil unions as being dishonest and unnecessary.

New Zealand First, by contrast, is the least-white Party in Parliament other than the Maori Party.

More to the point, when asked to justify his remarks this morning, Dunne claimed “When you’ve got MPs like Prosser and O’Rourke who tow that line, I think they deserve the criticism”.

Or, for those of you playing at home … Peter Dunne is perfectly content to put up a tweet containing the manifestly and demonstrably false allegation and imputation that NZF doesn’t accept gay people into our ranks – then attempt flailingly to justify said tweet by citing as evidence one of our MPs who happens to be gay.

Quality cognition indeed from the same man who thought synthetic cannabinoids should be legal … yet once described restrictions on the advertising and sale of tobacco to nine year old children as “fascist”.

Clearly, the man likes his F-words; and while it’s possible to say in Dunne’s defence that yes, Nazi Germany *was* pretty dang anti-smoking … I must confess myself to be genuinely somewhat perplexed as to how and why efforts to keep tobacco out of the hands of schoolchildren – or, for that matter, a Party whose Caucus is pretty much 50% non-white – seem to merit such strongly connotated slurs of white supremacy from Dunne.

In any case, perhaps Peter should have checked in a bit more detail why those Klansmen were relaxing membership restrictions to welcome black, gay, and/or Jewish members.

Now what’s another organization by, lead by, and for- white males that’s recently found itself subject to such an impressive decline in membership it found itself no longer officially recognized as an organization …

Guess that’s *another* point of commonality between the God[winning]-Emperor of Dunne and those folksy white supremacist types.

With any luck, neither will be around for much longer.