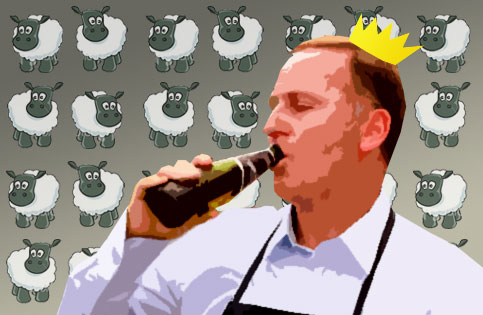 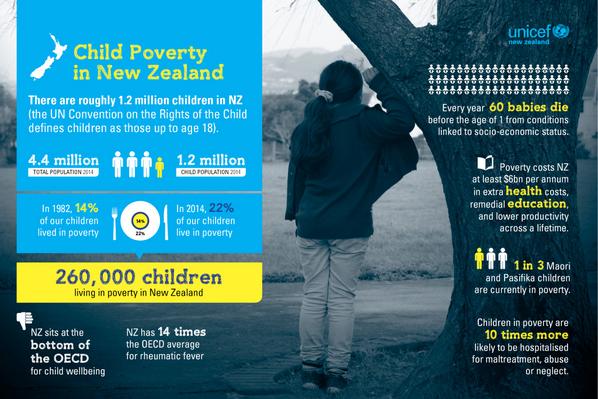 Where do I start?

John Key cockily asserts that he’s canvassed principals and only one or two kids per school, at most, are coming to school hungry.  Of course, Key doesn’t name these principals or their schools. As Peter O’Connor commented, “I guess it gives new meaning to evidence based decision making when a chat with a few principals can be construed as evidence”

As is often the case with Key, facts are flexible, evidence short in supply, and the answer he gives to a serious and important question is given as if he is on 7 Days, playing for shits and giggles.

Many took the time to speak out on Save Our Schools NZ’s Facebook page, aghast that John Key could even suggest there’s no problem.

“…at our school we feed between 50 and 70 kids everyday for breakfast, go through about 250 lunches a week. Yes we have fruit in schools and milk in schools as well. We are so grateful for KidsCanNZ‘s support. We have never let a child go hungry and nor would we.

I have come to the conclusion that the odd 1 or 2 in decile 1 schools are all at ours.

Thanks Mr Key for sorting that out.

Even where students were fed, there were still concerns raised, with many commenting on the quality of many of the lunches that do arrive at school:

We are a small decile 2 school and all our children have lunch. There is a problem though with the nutritional value of the lunch for a number of children.

Technically, a can of Sprite and a packet of chips is “lunch”.  Just not a healthy lunch.

Sure, they had lunch.  But what kind of lunch is that?

In our decile 1a school I have observed the following this term: 1. Two children have been absent from my class because there was no food for lunches.2. Today a boy took 11 of the milk cartons from our school milk and put them in his bag. He loves milk and they don’t have it at home…3. Our local church brings sandwiches every week which are frozen and we defrost or toast them for approx 5 students a day. 4. We provide breakfast, fruit and milk also. Something I have noticed …  students on camp who completely transform in their behaviour because, I believe, we feed them so well – I truly believe these kids had never been “full”5. It is not uncommon to see a children, including 5 year olds, with a large bag of chips for their lunch and play.6. We have a group of about 7 kids who have noodles almost everyday for lunch.

So, we’ve heard from the teachers, but what about some good hard statistics?

Asked to what degree they agreed with the statement “Students don’t come to this school hungry,” these were the results, broken down by decile: 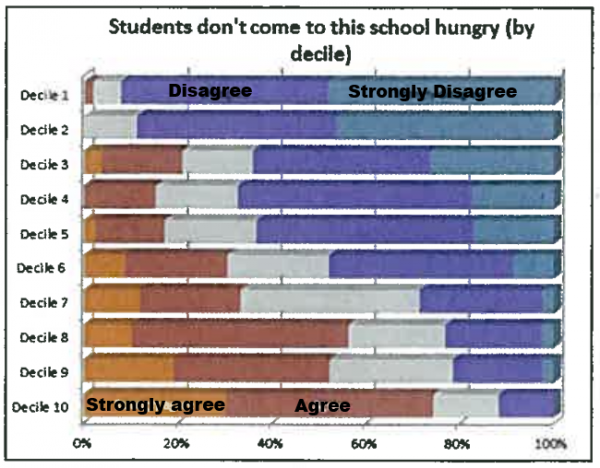 I wonder if Mr Key’s principals were in there?

If they were, then those principals and Mr Key might want to ponder the fact that, in these responses, staff were more likely than principals to say students were coming to school hungry.

He might also want to talk to principals such as Rhys McKinley, who found Key’s claim “laughable”, saying:

The Porirua East area is full of decile one and two schools. The principals often talk about health matters at cluster meetings, and food in bellies is a major issue. We’re not talking about one or two kids 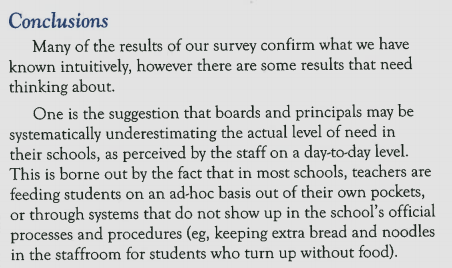 Perhaps the Prime Minister might want to speak to those at the coal face, for a more detailed picture regarding the need to feed the kids?