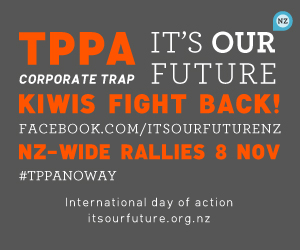 There is a mythology that the TPPA will never happen. That is a reckless assumption. It encourages complacency and inaction. And it is seriously wrong.

The political leaders of the twelve countries know they have to do the deal soon or it will become paralysed.

That won’t happen when the trade ministers meet on 8th November in Beijing on the margins of APEC.  But it could happen within a couple of months. No one should doubt how serious they are.

That was obvious at the ministerial meeting ten days ago in Sydney.

The pressure on the negotiators in the handful of remaining sensitive chapters is intense, as if they have instructions to finish their technical work so the ministers can finalise the deal.

What has been saving us all is the continued standoff between the US and Japan over agriculture and automobiles.

That could continue to save us. But don’t bet on it.

There are mixed views about what the Republican victory in Tuesday’s mid-term Congressional elections in the US will mean. It is already being spun to say that Republicans are pro-free trade and will be better for the TPPA, so they may give Obama fast track authority to ease the TPPA through Congress. That would reassure the other governments at the table and encourage them to finalise the deal.

Those who are tracking developments in Congress, such as Lori Wallach from Public Citizen, disagree. There is a real hatred of Obama in some Republican circles, and the price for fast track would be hugely controversial, such as rules on so-called currency manipulation, which some countries couldn’t agree to.

On the Japan side, it is unclear how the political scandals in the Abe government might affect the shape of a final deal with the US on agriculture and automobiles. Abe also has a controversial tax change to steer through the Diet in the next few months that will use up a lot of his scarce political capital.

Despite these factors, both the US and Japan need an outcome. Soon. They could well do a pragmatic deal that works for them, and let the dominos fall.

I can see four scenarios.

Scenario one:  The US and Japan decide to play by the supposed rules of November 2011 and liberalise everything for everyone. And flocks of flying pigs will fill the skies over the twelve countries.

Scenario two: The US and Japan cannot reach agreement on agriculture. Everything remains stalled. After some time – who knows how long – they stop pretending and suspend negotiations.

They know that once they do that, the momentum is almost impossible to regain. The Doha round at the World Trade Organization started in 2001, was suspended in 2007, then restarted but no-one would know! In this scenario, expect the TPPA to drag on with no one willing to pull the plug.

Scenario three: The US and Japan reach a deal on agriculture and automobiles, and offer virtually nothing to everyone else. That is consistent with what Japan reportedly offered to New Zealand on dairy in Sydney. Canada will happily follow suit, hiding behind the US and Japan. Faced with this, Groser can’t bring himself to walk away, swallows the rat, accepts what’s on offer and agrees to trade-off our medicines, internet, investment, SOEs, etc.

Scenario four:  Groser does what he has threatened to do, and walks away because there is no meaningful liberalisation on agriculture. More flocks of pigs join their whanau in scenario 1.

The agriculture lobby is terrified because they know the third option is the most likely. That saw them at panic stations last week with a series of statements from Federated Farmers, the dairy lobby, Groser and sympathetic journalists insisting that New Zealand must be prepared to walk away from a lousy deal.

Groser will never walk away. He views the TPPA deal as his brainchild. He will spin whatever is in the final deal as the first step to something that will bring huge long-term benefits to New Zealand. ‘We can’t afford not to be part of the biggest deal between the world’s biggest trading powers … ‘

If he is clever – and he is – Groser could seek to defer implementation of the worst parts of the TPPA so the impacts are delayed. Better still, if Parliament didn’t have to change the law immediately, the US would be unable to hold New Zealand to ransom over compliance (the blackmail process known as ‘certification’).

Then Groser can say, ‘see, the scaremongering about the TPPA was a big beat up.’ By the time the impacts are felt, his role as the minister who negotiated the TPPA (and hopefully the National government) will be history.

This could well happen unless we turn up the heat, on and after Saturday.

Defeatists will say that taking to the streets won’t make any difference. But activists in Australia, Japan, Malaysia and the US will be doing the same. The collective pressure does matter. The other governments are nervous about who can deliver on what they are promising, especially when it is unpopular at home.

It is a hell of a lot easier to stop the TPPA being concluded than trying to prevent it coming into force after the deal has been signed. This is the time to ram that message home, not just to the government, but to the opposition parties as well – including the prospective Labour leaders whom I have yet to see stake a position on the TPPA.