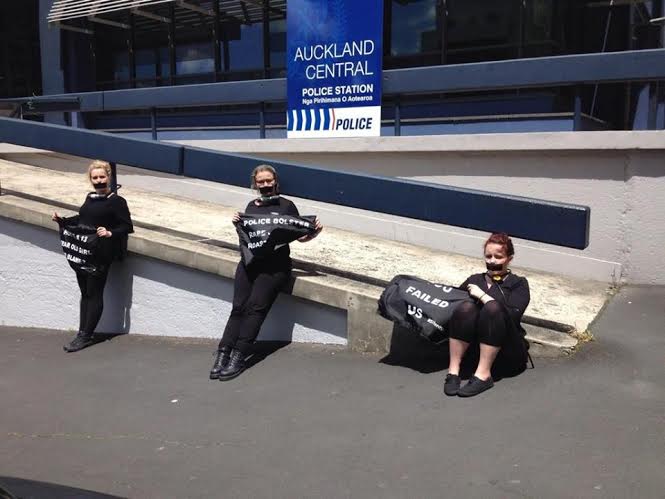 I think the government and watch keepers of the justice system have totally underestimated the level of public outrage and frustration over not only the Roast Busters issue but over the issue of a totally inadequate system that has completely failed to take rape seriously.

Today three women locked on outside Auckland Police Statement in a #silentvigil to draw attention to the abject failure of police to uphold justice for the young girls harmed by the Roast Busters. In this clip they talk about the fact that due process wasn’t followed. They’re asking for police accountability and questioning the rape culture buy-in of police which resulted in a vulnerable 13 year old girl being totally ignored.

Out of every 100 people raped in this country only one person sees any kind of justice and has their complaint result in a conviction; the rest are rendered silent. That means that while rape is illegal on-paper, it is arguably effectively legal by virtue of failure to uphold that law. This Roast Busters situation is nothing new and that’s why everyone is so angry about it.

Advocacy groups and activists have asked repeatedly for changes and have been largely ignored, and we are sick of being ignored. There are inroads that can be made in the justice system, there are changes that can be made to police processes to stop survivors from abandoning the process, we can have rape crisis prevention that covers all areas, we can have awareness campaigns at the national level – not just for young people but for everyone affected by sexual violence – and we can damn well stop rape.

But the government simply refuses to do enough. When we ask for stuff they do the bare minimum in response to our requests and it’s not adequate.

The changes we asked for last year when over 115,000 people signed a petition and marched and protested on the issue of rape culture we not met:

But what we really want is the government to properly listen, revolutionise the system and go above and beyond these requests and just FIX this messed up situation; a situation THEY HAVE THE POWER TO FIX.

You can do something about this:

We’re holding a public action outside Auckland High Court on Saturday the 22nd of November, at 1pm. Please come along and wear black. Here’s a link to the Facebook event:

There is also an event in Wellington:

Also, you can write to:

Prime Minister John Key at john.key@national.org.nz, the Minister of Social Development Anne Tolley at a.tolley@ministers.govt.nz, and Justice and Courts Minister Amy Adams at amy.adams@parliament.govt.nz and let them know how you feel about the fact that no one seems to care about rape in this country.

You can write in support of my open letter to Amy Adams or feel free to just wax lyrical about changes you would like to see.

In solidarity with those girls harmed by the Roast Busters and in solidarity with all of those affected by sexual violence in this country, we won’t lie down and be silent any longer. The time for action is now.