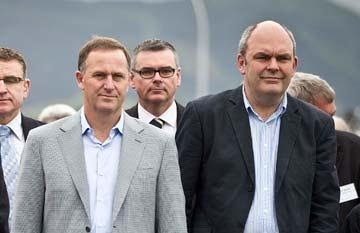 NEW ZEALAND’S LOVE AFFAIR with John Key, like most enduring relationships, is based on trust. Ever since he wrested the leadership of the National Party from the scary Don Brash, it has been Key’s unwavering mission to present both himself and the party he leads as ordinary, decent and (most important of all) non-threatening. Looking back over the past six years, only a fool would say he hasn’t been extraordinarily successful.

Had Brash won the 2005 election New Zealand would have been plunged into a period of acute political instability.

Faced with a government determined to relegate the Treaty of Waitangi to the status of an historical relic, and abolish the Maori seats altogether, the Maori Party, the Greens and (with much less enthusiasm) the Labour Party would have found themselves mobilising not only a furious Maoridom, but also a very significant swathe of Pakeha society as well. The resulting clash of a very significant minority of the population with “the racist Right” would have made the 1981 Springbok Tour protests look like a tepid historical dress rehearsal. After three years of increasingly violent and ultimately fatal confrontations, it’s likely that Brash, the National Party and their rabid Act allies would have been consigned to electoral oblivion. The Right’s electoral rehabilitation would have taken at least a decade.

In a very real sense, then, National (and New Zealand) dodged a bullet in 2005. And the two National Party politicians who appreciated just how big a bullet it was that had whistled over their heads were John Key and Steven Joyce. It’s not that these two politicians underwent some sort of Road to Damascus conversion from far-Right fanatics to kitten-eyed moderates – far from it. What they grasped was that any further attempts to impose the entire right-wing agenda in one fell swoop were bound to produce exactly the same electoral failure.

Brash had taken his inspiration from Roger Douglas and Ruth Richardson. All three of these politicians were “policy aggressors” determined to overturn “the conventional wisdom” in the name of a radically reconfigured New Zealand economy and society. But what Key and Joyce, both inveterate poll-watchers, clearly grasped was that National’s last-minute failure in 2005 was only partly due to Brash’s personal stumbles. When push came to shove, the New Zealand electorate just wasn’t ready to take yet another wild ride into political and economic upheaval. If National was to capitalise successfully upon the electorate’s growing disenchantment with “Nanny Helen’s “ “political correctness” and a Labour Party fast becoming unrecognisable to “Middle New Zealand”, then the negative legacies of Richardson, Shipley and Brash had to be expunged.

And nobody does expunge like John Key. In spite of the fact that in his earliest incarnation as a National Party back-bencher, the MP for Hellensville boasted a decidedly reactionary political profile, John Key, as Leader of the Opposition, proved to be extraordinarily adept at presenting himself as “Mr Moderate”, “Mr Bloke-Next-Door”, “Mr Guy-I’d-Like-To-Have-Beer-With” or (if you were a woman) “Mr Guy-I’d-Like-To-Shag”. If Brash’s mentors had been Douglas and Richardson, the policy aggressors; Key’s were Sir Keith Holyoake, Jim Bolger and Clark herself: incrementalists all.

But just because, as a politician, you’ve decided to make haste slowly, doesn’t mean that you don’t get to where you’re going in the end. A dispassionate review of the Key Government’s legislative achievements since 2008 could only conclude by observing that notwithstanding all the taunts of National having turned into “Labour-Lite”, this is a very right-wing government indeed. It’s unrelenting hostility to all forms of environmental protection; its opening of our land and sea to mineral exploration and extraction; its blank refusal to take any meaningful action against Climate Change and its determination to protect the dairy industry from any and all forms of practical regulation: these are only the beginning of what is now a very long list National’s reactionary victories.

And just consider what has characterised the opening shots of National’s third term. Dismissed as mere technical adjustments, the Government’s changes to the Employment Relations Act place New Zealand at the far right-wing reaches of the OECD. (As the CTU president, Helen Kelly, quite rightly points out.) Then there is Bill English’s and Paula Bennett’s extraordinary decisions in relation to state housing. At a time when people are living in caravan-parks and cars, the idea of selling up to a third of the nation’s state houses represents a sudden and utterly unmandated return to the darkest days of Jenny Shipley. And as if these measures weren’t reactionary enough, it now seems certain that Key will commit New Zealand military forces to the confused and almost certainly ineffective US-led war against the Islamic State.

“Moderate”? “Labour-Lite”? Not really. John Key’s government is every bit as bad as its predecessors. It is, however, a great deal better than most of them at pretending it isn’t. And to those who find it impossible to see “that nice Mr Key” as being anything other than the soul of reason and common sense, I can only offer the words of St Matthew’s Gospel:

“Beware of false prophets, who come to you in sheep’s clothing, but inwardly they are ravenous wolves.You will know them by their fruits.”