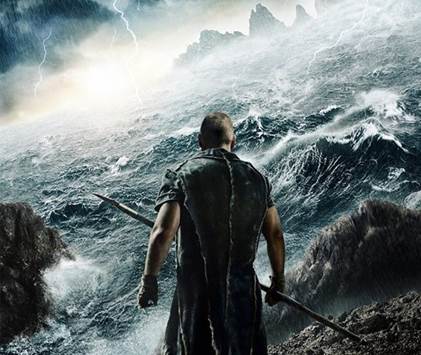 NOAH is a curious movie. Conceived as a biblical epic, it’s target audience was originally the millions of Americans who regard the Bible as God’s inerrant word. With the sin-filled works of Hollywood forbidden to these true-believers, Christian movie-makers have developed a lucrative niche market for church-backed big-screen offerings that faithfully reproduce the scriptural plot-lines.

But if fidelity to the Genesis story was central to Director, Darren Aronofsky’s, original pitch for Noah, the final cut presents the viewer with something altogether different. Essentially, Aronofsky and his co-writer, Ari Handel, have taken the biblical tale and re-worked it into a homily on humanity’s will to dominate and the damage it inflicts upon both the social and the natural world. Not surprisingly, when Paramount Pictures attempted to secure the support of the Christian distribution networks for Aronofsky’s final offering, the response was less than enthusiastic.

The ease with which Noah’s screenwriters’ were diverted from their original intentions is understandable because, read closely, the Book of Genesis is a very weird story. What, for example, are we supposed to make of this?

“And it came to pass, when men began to multiply on the face of the earth, and daughters were born unto them, that the sons of God saw the daughters of men that they were fair; and they took them wives of all which they chose.”

“There were giants in the earth in those days; and also after that, when the sons of God came in unto the daughters of men, and they bare children to them, the same became mighty men which were of old, men of renown.”

These verses are just there in the sixth chapter of Genesis – apropos of God knows what! One thing, however, is clear: that in the years following Adam’s and Eve’s expulsion from the Garden of Eden some very peculiar things were going on. Odd enough for Aronofsky and Handel to incorporate these fallen sons of God, these angels, into their movie’s plot-line. They called then “The Watchers”

Exactly what America’s stern guardians of evangelical Christian orthodoxy made of this plot device when asked to view the final cut of Noah one can only guess. In all probability they did not want the younger members of their congregations speculating about why angels might want to “come in unto the daughters of men”. Aronofsky’s and Handel’s use of the expression “The Watchers” posed even bigger problems.

Any good dictionary of religion (not to mention Google!) will lead any person curious to learn more about the Watchers to another very strange collection of stories about what happened in the years between the expulsion from Eden and the Great Flood. The Book of Enoch is, if possible, even weirder than Genesis. So weird that for more than 2,000 years both the Judaic and the Christian religious authorities have thought it best to keep The Book of Enoch out of both the Torah and the Bible.

According to Enoch, the Watchers didn’t just content themselves with seducing the daughters of men, they had a much bigger agenda:

“It happened that when in those days the sons of men increased, pretty and attractive daughters were born to them. The Watchers, sons of the sky, saw them and lusted for them and said to each other: Let’s go and pick out women from among the daughters of men and sire for ourselves sons”.

To these, the offspring of the “sons of the sky”, the Watchers passed on all manner of useful knowledge. Enoch helpfully vouchsafes to us the names of some of these Watchers and what they taught:

“And Azâzêl taught men to make swords, and knives, and shields, and breastplates, and made known to them the metals of the earth and the art of working them, and bracelets, and ornaments, and the use of antimony, and the beautifying of the eyelids, and all kinds of costly stones, and all colouring tinctures. And there arose much godlessness, and they committed fornication, and they were led astray, and became corrupt in all their ways. Semjâzâ taught enchantments, and root-cuttings, Armârôs the resolving of enchantments, Barâqîjâl, taught astrology, Kôkabêl the constellations, Ezêqêêl the knowledge of the clouds, Araqiêl the signs of the earth, Shamsiêl the signs of the sun, and Sariêl the course of the moon.”

As it is, the screenplay of Noah is neither fish nor fowl. It’s certainly not a biblical epic in the tradition ofThe Ten Commandments or The Greatest Story Ever Told, but neither is it a work of science fiction likeStargate. Instead, Noah is that rarest of things in this irreligious age, a heretical work.

Sensing that the biblical version of the Great Flood is but a fragment of a much older and more finely textured myth, Aronofsky and Handel have attempted to construct from its ill-fitting remnants a story about human power, human guilt, and human redemption. That they failed, producing a film so filled with gross failures of logic, motivation, and theology that not even the participation of Russell Crowe, Emma Watson and Sir Anthony Hopkins could save it, is not to be wondered at. Myths are the work of many literary hands, constructed over centuries. It’s takes a scholar of J.R.R. Tolkien’s stature to make a believable myth from the contents of a single mind.

What can be said, however, is that Aronofsky’s and Handel’s Noah possesses the power to set those whose temperament leans towards the mystical on a fascinating path of inquiry. It also reminds us that the world depicted in the Bible is a very strange one. A world choc-full of supernatural beings – and only some of them are benign (or even decent!)

No wonder the Christian Right refused to endorse it.