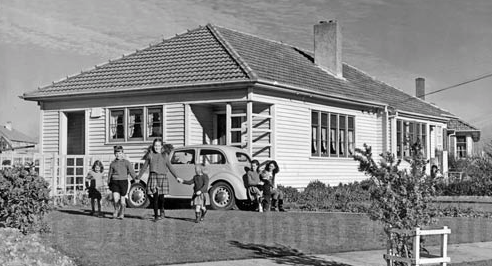 On 14 October, in a report on The Daily Blog, I wrote,

In his story, TV3’s Brooke Sabin raised the question,

“So a big cull of state houses is about to get underway, but the crucial question is: Will all that money make its way back into social housing or will some be pocketed by the Government? The official response is that hasn’t been worked out yet.”

The money will indeed be “pocketed by the government”.

For no other reason than their re-election in 2017 depends on it.

The TV3 story reported that up to 22,000 homes worth an estimated $5 billion could be sold off. This would make it one of the biggest asset sales in recent history – when John Key himself promised an end to state asset sales in February this year.

It is also a time when 5,563 are on Housing NZ’s ever-growing waiting list.

Three days later, on 17 October, Brook Sabin’s question was answered in full, and my prediction (once again) proved to be correct. A quote from our esteemed Deputy Prime Minister, Bill English,

Finance Minister Bill English says the proceeds from selling state houses are unlikely to be spent on new state houses and may go into the Consolidated Account.

“I mean, if we want less stock, there’s not much point in rebuilding stock with it” …

Whilst National “made noises” about some  Housing NZ properties being sold, or transferred to social organisations early in the year, there were no pre-election policy announcements  remotely resembling those made public by Bill English two weeks after the election. (See: National’s pre-election policy: 2014)

This was a radical, unannounced, policy that has taken the country by surprise.

In the Herald, columnist Dita De Boni was scathing in her condemnation of Key’s heretofore secret plan to sell  state houses,

Those conditions gave the Labour Government – elected in 1935 – a mandate to make the provision of state housing a top priority. Then Minister of Housing Walter Nash told New Zealand it could not prosper or progress with a population that “lack[s] the conditions necessary for a ‘home’ and ‘home life’, in the best and fullest meaning of those words”. It was a popular sentiment at the time, but look how far we have since regressed. We again have children and their parents living in cars and sheds. We have thousands of homeless; old diseases and ingrained misery have returned as sections of the population struggle to keep pace with the rising cost of living.

And at this critical juncture in our history, our Government is looking, instead, to offload state housing. It is the absolute, ultimate irony: a public welfare system that bridges the gap left by market failure, that, when starved, denigrated and under-resourced, as it is now, can only, apparently, be saved by the market.

The Government has tried to slip the sell-off of state housing under the radar: I guess they don’t want to be seen to be contradicting their pre-election promise not to sell any more state assets. They focus instead on “first home affordability” – a much more pressing concern for their supporters (as long as it does not affect their other supporters, who don’t want too much new housing to depress the capital value of their property).

It is hard to understand how reverting to the Victorian solution of seeing churches and social agencies haphazardly tackle this gaping social wound will work. They don’t have the resources, for one thing. They are also not plugged into the bigger picture – the social needs of the tenants, the transport and logistics needs of new housing and so forth, all things a clever, committed government can oversee. Not ours then, which is trying desperately to shift the immediate costs of social housing elsewhere, and the benefits to a crony cohort.

One method they’ve used is to seed the idea with the public that state housing is all let to gang members and chronic social misfits who trash their properties and refuse to move out. Of course, that does describe a percentage of state house tenants – or any tenants.

Call me old-fashioned, but I tend to think that housing is one of the core concerns of Government, and that the provision of state housing – as well as its proper management and upkeep – is fundamental. It is astonishing that a Prime Minister who grew up in a state house, and has gained huge political advantage from being able to trumpet that fact, can’t see why it is wrong to pull up the ladder after him.

I encourage the reader to read Ms De Boni’s full piece. It is a savage indictment of John Key’s miserable agenda to get the State out of social housing.

New Zealanders should be under no illusion:  housing in this country is about to get a whole lot worse before it improves. We can expect to see more over-crowding;  entire families living in cars, under bridges;  the rise of  the first squatter camps since the Great Depression; more poverty; and more spreading disease.

Bill English has made it abundantly clear: this government will be selling state houses. It will not be “rebuilding stock” (houses).

This may not be what New Zealanders voted for on 20 September – but did 1,131,501 voters who ticked the box for National expect better?

NZ Herald: State housing shake-up: Lease up on idea of ‘house for life’

The Standard: Unaffordable housing & the culture of greed