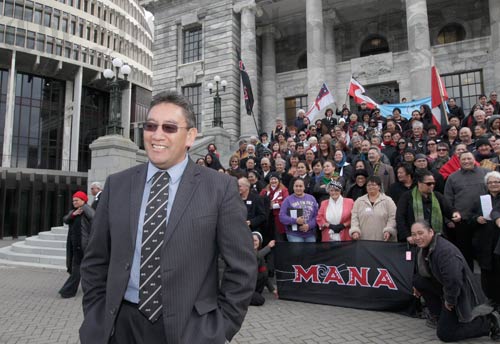 A few days ago, allegations that had been percolating for some time about Hone Harawira employing three either accused or convicted sex offenders on his Parliamentary pay-roll came to light. (one imprisoned before working for MANA; one who found himself convicted and imprisoned after being hired to work for MANA; and one who was charged just before the last Election).

Understandably, there have been some very, very pronounced reactions to this news. We take a dim view of sex-crimes in our society – particularly when they involve minors or children – so I can well understand the baying for blood that is presently emanating in ululating fashion from some quarters and commentators.

I can also very vaguely see why (but disagree utterly with the sentiment) some pro-MANA people are doggedly insisting that this is a beat-up by an aggressive media playing “Gotcha” with breathless reporting. It isn’t, but given that allegations InternetMANA was being funded by meth-money thanks to some of DotCom’s connections seemed to pretty much be the order of the day for right-wing shadow campaigning a few weeks prior to the election, and especially considering what we’ve now had confirmed for us in #DirtyPolitics about right-wing commentators literally *making things up* to try and smear opponents, this misguided mindset on the part of some war-weary MANAites is not totally inexplicable. There’s also assumedly a whole helluvalot of cognitive dissonance for some of the good people who joined up and campaigned for MANA on the assumption that it was the party of child poverty … only to find out that child pederasty is what’s potentially been lurking on the payroll thereof.

That’s actually one of the things that renders this situation so tragic. Given that the offending (alleged or otherwise) of two of the staff involved was carried out against children (Mr Awaru is charged with raping a girl younger than twelve, while Mr Taylor was imprisoned for sexually grooming young boys), the fact that so very much of MANA’s appeal and key policy is child-based makes this situation all the graver. The duality between a party whose kaupapa is so driven toward caring for our younger and more vulnerable citizens yet whose Parliamentary Services crew-complement features individuals who either have preyed upon, or are alleged to be in the business of preying upon, exactly those same kids definitely makes this all the more wrenching.

My heart really does go out to the hundreds of MANA members around the country who’ve had to suffer a string of body-blows over the last month or so. First there was the election loss, then the recount added votes for Davis, and now allegations of the tacit non-condemnation of sex offenders are being added to the tally. It’s certainly getting more difficult to see how MANA will be able to recover from all of this and seek successful re-election in three years’ time considering all that has happened – and, importantly, the fact that we’re stilll yet to get the full picture about what’s occurred.

Through my years advancing in these political trenches ever closer to the Front Lines down in Wellington, I’ve become increasingly enamoured of the idea that political parties’ Parliamentary operations (i.e. their Bowen House offices and use of Parliamentary Services resources) should not always enjoy the rigorous protection from OIA that they presently do. I say this not only because I’ve occasionally found myself reduced to having to call up reception and ask to be put through to such-and-such in order to divine  whether a particular of my political enemies is still acting as a waste of taxpayer money by being employed by a political party … but also because with the way things are set up at the moment, it’s *very* possible for the leaders of parties to use their operational budgets to do some pretty *ahem* interesting things without a skerrick of scrutiny for how they’re spending *our* money. I won’t go into detail, but the difficulty concerned citizens are going to have working out what’s transpired here thanks to these protections ought to be evidence enough that perverse outcomes can ensue from this cone of silence.

Further, despite the legal protections afforded to MANA and other parties when it comes to revealing to us down here in the cheap seats how they’re using our coin, I would respectfully contend Harawira has something of a moral duty to front up and explain – not just to us taxpayers, but to his own long-suffering party members – exactly what’s been going on here with his staffing allocations.

Until then, we’re left asking “what didn’t he know, and when didn’t he know it?” of Harawira, and I’d also be inclined to ask why Awarau was not stood down as soon as Harawira and MANA became aware of the charges laid against him.

As-is, and acutely conscious of the necessity of balancing both the needs and the deservedly protected status of the survivors with what appears to be the desire of about a third of the political spectrum to make this look as bad as possible for Harawira and MANA … Hone deserves the chance to explain what, exactly, has happened.

As his staffers’ paymasters and the people whom he helped to govern and represent for the best part of a decade … we deserve to be able to judge him on the strength of that (non-)explanation.