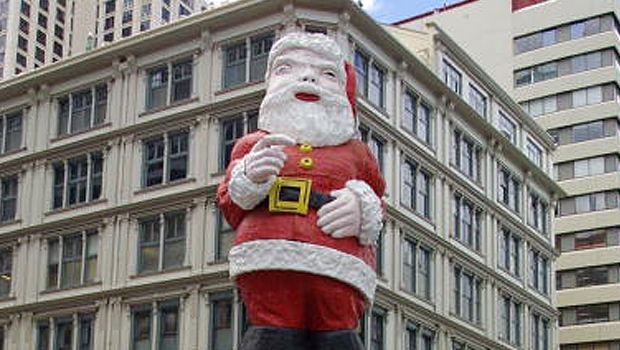 For the miserly it’s a no-brainer. The $150,000 (or thereabouts) financial cost of installing, maintaining and dismantling Santa is just a waste of money. The real answer to this matter of cost, however, is ‘it all depends’. In particular it depends on whether the city has unemployment, or full employment.

Keynes noted in the General Theory:

If the Treasury were to fill old bottles with banknotes, bury them at suitable depths in disused coalmines which are then filled up to the surface with town rubbish, and leave it to private enterprise on well-tried principles of laissez-faire to dig the notes up again (the right to do so being obtained, of course, by tendering for leases of the note-bearing territory), there need be no more unemployment and, with the help of the repercussions, the real income of the community, and its capital wealth also, would probably become a good deal greater than it actually is. It would, indeed, be more sensible to build houses and the like; but if there are political and practical difficulties in the way of this, the above would be better than nothing.
[JM Keynes, Book 3, Chapter 10, Section 6 pg.129 The General Theory]

(Keynes, by the way, as a source of famous quotations probably comes third, after the Bible and Shakespeare.)

So, for now, putting aside who will actually incur the financial cost, if the Auckland Council was to offer $150,000 to a firm (say, Auckland Installers and Dismantlers [AID] Ltd.) who would do the required work, what would the costs and benefits actually be, and to whom?

Case 1: Unemployment scenario. AID would be paid the $150,000, causing most of that to be spent, by the otherwise unemployed workers hired, on other goods and services. Most of the extra income from this spending will in turn be spent by others, and so on. Globally the initial ‘injection’ of $150,000 of spending would actually multiply into about $400,000 of spending, most of which would be in Auckland. This would mean that society overall would be better off by $400,000 worth of goods and services ($150,000 of this amount being the erected Santa). The only economic cost would be the foregone (and unwanted) leisure of the otherwise unemployed workers. Society is better off both by the happiness that Auckland’s Santa brings, and by the extra $250,000 goods and services that will be enjoyed by workers who would otherwise have been un- or under-employed. This is Keynes’ answer.

Case 2: Full Employment scenario. AID would have to forego other work. The cost would thus be the value of these other goods and services not produced and enjoyed. The benefit would be the enjoyment arising from Auckland’s Santa. The cost could well be greater than the benefit. This is the ‘neoclassical’ economic argument that always deploys the assumption of full employment. When the assumption is challenged, the retort is usually some variant of: ‘the economy generally works as if there was full employment’.

So, from a societal perspective, if Auckland has an unemployment problem, then Santa’s installation creates substantial benefits with no actual costs (except any unhappiness incurred by those who dislike giant Santas). (There is a proviso that an alternative spending project might give even greater benefits. Nevertheless Big Santa is probably worth more than Keynes’ old bottles.) If Auckland really does have full employment, however, the costs will most likely outweigh the benefits.

Neoclassical economics is a special theory of full employment economics. Keynes gave us a general theory which encompasses neoclassical thinking (as a special case) rather than refuting it.

Who Should Pay for Santa? (Assuming Case 1)

If the Auckland Council was to pay the $150,000 (or pay it to Heart of the City) to erect Santa, then there would be a public financial cost. It would presumably add to Auckland Council’s debt, while creating substantial private benefits to those for whom the $400,000 of enabled spending represented income.

Economically, it’s a difference between the benefits of employment and the ‘benefit’ of unemployment. Financially, the Auckland Council would see the Auckland public as losers however, unless they believed that Aucklanders got $150, 000 worth of happiness from Santa. Thus the Council would need to be persuaded to see the bigger picture. Likewise some private benefactor(s) might see the bigger picture.

It looks like Santa will be erected in 2014, thanks to Mansons TCLM and Sky City. While indeed it is a case of these benefactors seeing the bigger picture, such firms can be quite picky and choosy about what projects to support. The overall benefits of the spending injection are the same, if there is unemployment, whoever the initial spender might be. And, in times of full employment, the costs of such frivolity are the same whoever the frivolous might be.

The wider lesson is that any organisation (or person) with deep pockets or a good credit rating should aim to spend, in a counter-cyclical way, at times of significant unemployment. The most prominent such organisation with financial capacity is of course the national government. The benefits of governments’ incurring financial costs for greater economic and social good are overwhelming. Debt – certainly deficit spending – becomes the solution, not the problem.

Philanthropic foundations can achieve such deficit spending without incurring debt. Governments however (except those of the likes of Norway, Qatar and Singapore) can only achieve such deficit spending by incurring more debt. In principle that debt can be paid down, at least in part, at other times of the economic cycle. Governments should – indeed governments must – incur additional debt at times of significant unemployment. They can (and should) repay that debt (or at least some of it) in times of the cycle when ordinary households and businesses are undertaking deficit spending.

Financial costs must always be seen in a long-term perspective. Further, if households and businesses do not spend freely at least some of the time, then adding to government debt – even huge government debt (such as that of Japan) – still represents the solution rather than the problem. Governments and philanthropic organisations must compensate during those frequent periods of private sector austerity.

When nobody pays for Santa we all become worse off (unless we really are living in the neoclassical special case of full employment). It is the societal economic costs and benefits that matter, not the individual financial costs. That’s how the Golden Gate and Sydney Harbour bridges were built in the midst of the Great Depression. Someone saw the bigger picture.

Auckland’s Santa hardly compares with these icons of course, but it’s the same principle on a smaller scale. Affordability is not about money. Rather, it’s about the availability of workers and other resources. I have little doubt that Auckland has enough available resources to erect Santa, and to give people credit for doing so.