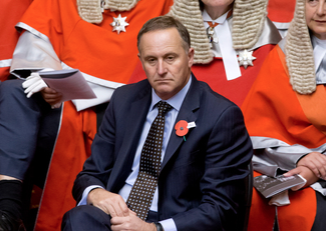 Parliament opened this week and I still find it a very odd place. Most of the people are reasonably courteous and friendly, but the rituals are archaic and the rules around issues like the swearing in oath are oppressive and undermine MPs’ commitment to upholding Te Tiriti o Waitangi. The Parliamentary opening also celebrates violence, as it involves soldiers and medals, guns, and war planes in the sky. It includes Supreme Court Judges in horsehair wigs. A black rod and a golden mace preside.

It is hard to find the sense of being a Pacific country but when Te Atiawa kuia start the karanga and the whānau perform waiata, then everything comes alive.

The Maiden Speeches are also happening and what a mixed bag they are. Some MPs who look young enough to be my grand babies are making sad enthusiastic speeches about Margaret Thatcher as the role model for their political careers. I have heard new MPs from National and ACT espouse the absolute primacy of the individual with no recognition of how we are social animals who are utterly interdependent. They don’t seem to realise they are the product of many lives and processes, not to mention the taxes of everyone who built the roads, schools, hospitals and institutions where they have gained educational qualifications and privilege.

You would expect these young people to have some modern heroes, but so often its Margaret Thatcher and Roger Douglas who get celebrated. It’s was chilling to see the line-up of older, male Pākehā  former members at the front of Parliament, including Roger Douglas and Don Brash, the architects of the current trickle down disaster. They were sitting watching their young prodigies get up and espouse their individual and property rights obsessions as our world becomes increasingly unequal.

Then there are some new Māori and Pacific MPs who are a breath of fresh air in the Labour ranks, and I am looking forward to hearing James Shaw’s Maiden speech because he has a strong articulate vision of sustainability and will help us set a positive agenda for the term.

But it’s not a lot of fun here at the moment. The Government is edging Aotearoa new Zealand towards a war footing based on the American world view. The failure of American foreign policy to create peace in the Middle East is undeniable, but like lemmings we are heading for that dangerous cliff.

The very first Bill of the Parliamentary Term was debated Wednesday night and it is an unadulterated attack on workers’ rights. It’s an attack on collective bargaining and meal breaks amongst many other nasty little clauses that set us back to the 19th century. We debate with passion because people deserve so much better and we stand for a fairer world.

Thanks to 10 percent of New Zealanders, the Green Party stands here unbeaten, united, and in good voice.