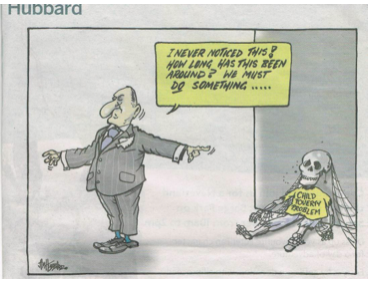 It might not seem so now, but child poverty was a major election issue. What a pity we did not have the full debate. In that debate it would have been very helpful to have seen the Ministry of Social Development’s officials’ advice over the past 2 years as report after report was submitted to government.

Radio New Zealand made an OIA request in May 2013 for the advice given in response to the Expert Advisory Group on Solutions to Child Poverty report but the documents were not released until after the election, some 17 months later. Leaving aside this extraordinary time delay, the OIA documents are full of black holes where large  parts of advice have been blanked out. Radio NZ was onto it with an excellent piece from Brent Edwards on Morning Report, provocatively entitled  ‘Officials urge govt not to spend more on alleviating poverty’  Good also to see the Ombudsman expressing disquiet about the OIA process.

Radio NZ was given the following reasons from Minister Bennett for withholding information:

How extraordinary!  My initial reaction was to think the officials of the Ministry of Social Development had been offering government something really unpalatable.  Perhaps more exhortations to force sole parents with very young children back to work?  Perhaps benefits cut again to provide more incentive for paid work, or for Working for Families to be more tightly targeted?  Possibly further subsidises to paid work as the answer to child poverty?  Maybe more money to private investigators to hound sole parents?   Perhaps this agenda was exactly what the government had in mind for the post-election period.

If this was the agenda, given the pre-election public concern about child poverty,  it was not in the government’s best interests for that to be seen as the policy direction.  That explains the suppression.  Even so, it is ironic that if such advice is ‘serving the wider public interest’ the public must be shielded from hearing about it. The election is over, let’s see it released in full now.

But, there could be a more sinister explanation…

Soon after the introduction of Working for Families in 2006 the officials at the MSD offered advice in a briefing to the government about the impact of Working for Families. This was called Pockets of Significant Hardship and Poverty and was originally accessed by researchers under the OIA.  In it the officials warned the government of a group of families that were desperately poor and marginalised, falling below even the 40% poverty line. It did not suit the  Labour Government at the time to hear about the deficiencies of its landmark ‘Working for Families’ policy and that report was suppressed and was not published  on the website until  June 2007.

Maybe, just maybe, the officials both in 2006 and 2013 were doing the same thing:  warning of the social divide and the extreme marginalisation of many families under current policy settings.  At very least the advice may have told the government that more money was essential.  Already we can see in the un-expunged bits that they thought  fiscally neutral suggestions, such as taking from poor older children to give more to poor younger children, would be a fruitless exercise.  It is even conceivable the officials advised the government that the most cost-effective way to reduce the worst child poverty, without helping higher income families at the same time, would be to extend the full child-related tax credits to those who currently miss out under Working for Families.

After all, the latest Household  Incomes monitoring report  from the Ministry not only points to the worrying 135,000 children under the 40% poverty line but highlights again the impact of the exclusion from WFF:

From 1992 to 2004, children in workless households generally had poverty rates around four times higher than for those in households where at least one adult was in full-time work.  From 2007 to 2012, the difference was even greater – around six to seven times higher for children in workless households.  This to a large degree reflects the greater WFF assistance for working families than for beneficiary families.

The fall in child poverty rates from 2004 to 2007 for children in one-FT-one-workless 2P households was very large (28% to 9%), reflecting the WFF impact, especially through the In-work Tax Credit.

How absurd the justification for suppression is.  How would the release of advice “prejudice the quality of information from officials”?  The officials have written plainly in public reports about child poverty year after year. The withholding   “to protect the effective conduct of public affairs through the free and frank expression of opinion”   is NOT to protect the officials, but to protect the government.

Clearly the Ministry was not very impressed by some of the Expert Advisory Group’s  report .  I could understand that officials might be nervous of upsetting their associates in Wellington when they use phrases like “the more sensible of their recommendations”  implying many of the recommendations were not sensible. It would have been easy to black out such ‘damming with faint praise’ comments in the interests of free and frank advice.  But no, officials have not been protected;  it is there for all to see.

On the Nation (Saturday 11th October) on Working for Families, John Key indicated there would be no more money for those on benefits and he explicitly stated that the In Work Tax Credit would NOT be expanded to beneficiaries so as to incentivise parents into paid work.  Shrewdly he said this reflected Labour’s view too.  Oh Labour, you got this one so wrong!  In the great game plan, making it look like there is agreement across the political spectrum  makes it easy for Key’s  government to continue to withhold the extra money that could relieve child poverty.

As the availability of official data and information on so many aspects of welfare dries up, will we ever see the suppressed advice that if acted on could have helped thousands of families and children?   The government hopes that in a few months no-one will remember the suppression of these inconvenient paragraphs.