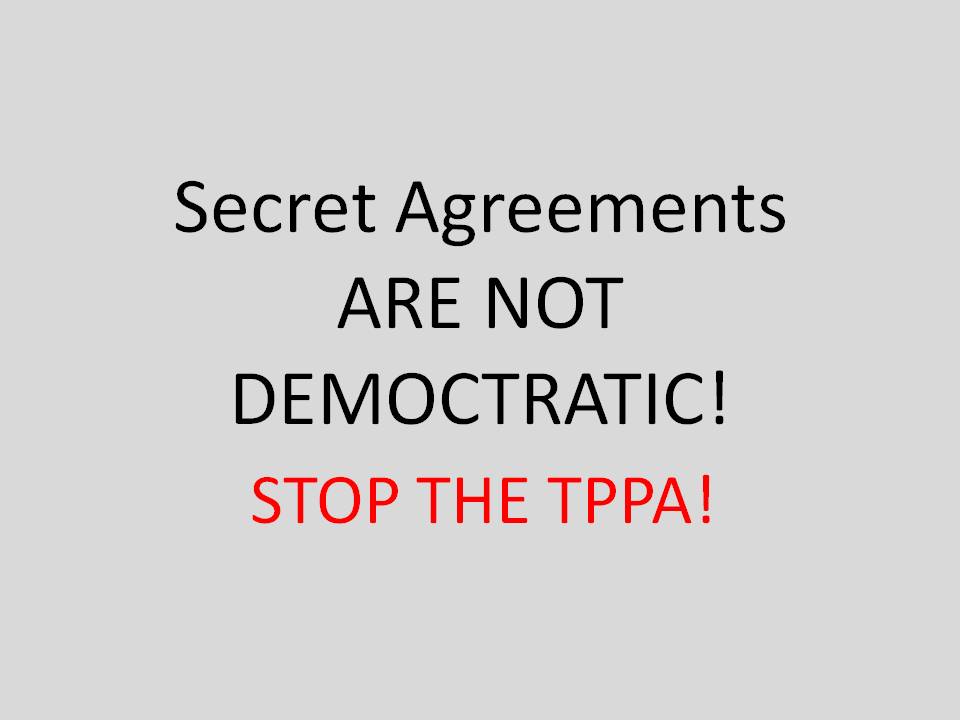 On 8 November 2014, thousands of Kiwis will take part in the International Day of Action to protest the Trans-Pacific Partnership Agreement (TPPA). The rally cry for us is TPPA – Corporate Trap, Kiwis Fight Back.

Why should you join us?

The latest version of intellectual property chapter, leaked last week, is a timely reminder of what’s at stake. This confirmed that the US has backed off some demands, such as the ban on parallel importing, because its own courts said ruled in favour of parallel imports. It has toned down some other demands, such as criminalising those who break the regional digital locks on DVDs, in the face of a concerted campaign for Internet freedom.

But the leak showed two major risks for New Zealand are still on the table.

Big Pharma wants to lock up access to information on new generation biologics medicines to treat cancer, diabetes and other crippling illnesses in New Zealand for a further three or even seven years. That means they reap their megaprofits for longer. Pharmac would have to reallocate funds from its capped budget to pay for them or face a political and public backlash for not subsidising the super-expensive new life saving medicines.  Think Herceptin.

Copyright protection is also likely to rise from the life of the author and 50 years to life plus 70 years. Forget claims about fair returns for the creator – they are long dead. This is known as the Mickey Mouse clause, so the likes of Disney whose legal rights are about to run out can keep reeling in the royalties. The Association of Libraries ….

Do I hear you sigh? Heard this all before? I couldn’t agree more. But remember the US has had to back down on various demands because of the enormous pressure on our and other negotiators. Silence begets surrender.

There is a much bigger long-term reason to fight the TPPA. It is just one of three mega deals currently being negotiated.  Their common aim is to lock the world into a failed neoliberal regime to benefit corporate greed. These so-called 21st century deals project their future, not ours.

The terrible twin of TPPA is a deal being negotiated between the US and EU, known as TTIP (Trans-Atlantic Trade and Investment Partnership). Imagine what kind of rules the US and EU will agree on! Already TTIP has sparked protests throughout Europe, especially on the right of foreign investors to sue the governments. Vattenfall’s two disputes against Germany over climate change mitigation measures and closure of nuclear power plants has made the risks very real.

The third leg of the trifecta is the Trade in Services Agreement (TISA). Think of this as the bastard child of the GATS – the services agreement at the World Trade Organisation that Kiwis, among many others, protested against in the early 2000s. Negotiations in the WTO to get tighter rules that would benefit the world’s services transnationals, from banks and entertainment to accounting firms and water companies, have been paralysed for years.

So 23 parties, including New Zealand, are stitching up their own deal through the back door. The stated goal is to bring TISA back into the WTO and force it on countries like India, Brazil and South Africa that have held out in the GATS 2000 negotiations.

Australia has been hosting the TISA talks under a commitment to secrecy that’s even more excessive than the TPPA. You might remember the financial services text was leaked several months ago. As with the TPPA, there are bound to be more.

I’m just on my way back from two meetings in Geneva that reinforce the need to stop this package through opposition on a global scale.

The annual World Investment Forum 2014 at UNCTAD had the telling title of Reform of the IIA Regime. The session on investor state dispute settlement was standing room only. Governments like Argentina, South Africa, Namibia, Slovakia and India, who are victims of ISDS disputes, spoke passionately about the abuse of these treaties and attacks on their sovereign right to regulate in the national interest. They debunked claims that these agreements attracted foreign investment that benefit them. Several confirmed they are terminating some existing agreements, seeking to renegotiate others, and developing national investment laws as viable alternatives.

The corporate lobbies from the US and Europe, and their patron states, insisted there were minor problems with the investment regime that could be resolved by tweaking –along the lines of what is being proposed in the TPPA and TTIP.

This debate is fast gaining momentum. But it will be several more years before the ground shifts far enough to achieve the critical mass that is needed to force a total overhaul of the investment regime. The last thing countries should be doing is locking themselves into more of these investment deals through treaties like the TPPA – especially New Zealand, which currently has limited exposure to these risks.

The second event was a forum organised by Public Services International, among others, to educate national activists and Geneva-based government delegations about the dangers of TISA. Our presentations drew belligerent reactions from the countries belonging to the Very Good Friends of Services, as those promoting TISA call themselves. It made the tone of the TPPA negotiations seem almost convivial, and showed how ideologically determined they are to tighten the noose of neoliberalism. What they can’t get in one agreement they will try for in another.

The TPPA is the longest running of these deals. Negotiations began four and a half years. They seem to be at a perpetual tipping point. What happens in the next month will be crucial. Obama announced some months ago that he wanted some kind of deal to announce public when the APEC, and TPPA, leaders meet around 10 November – in China! US officials repeated last week that they want to announce ‘something close to conclusion’. That seems implausible, with the US and Japan still deadlocked over agriculture. A series of meetings have just begun in Australia in an attempt to pull off the seemingly impossible.

Yet another failed deadline will pose huge credibility problems for the politicians, who have to justify pouring more taxpayers’ money down the TPPA hole. It will also be soul destroying for many of the negotiators who are heartily sick of the process.

But the prospect of another year or more of negotiations is also a problem for critics of the TPPA. The greatest risk is popular fatigue and media disinterest. That is why we need you to send an uncompromising message to John Key and Tim Groser – sign the new petition on the itsourfuture.org.nz website – and join us on 8 November somewhere around the country! Details are on the website,  facebook or #TPPAnoway.