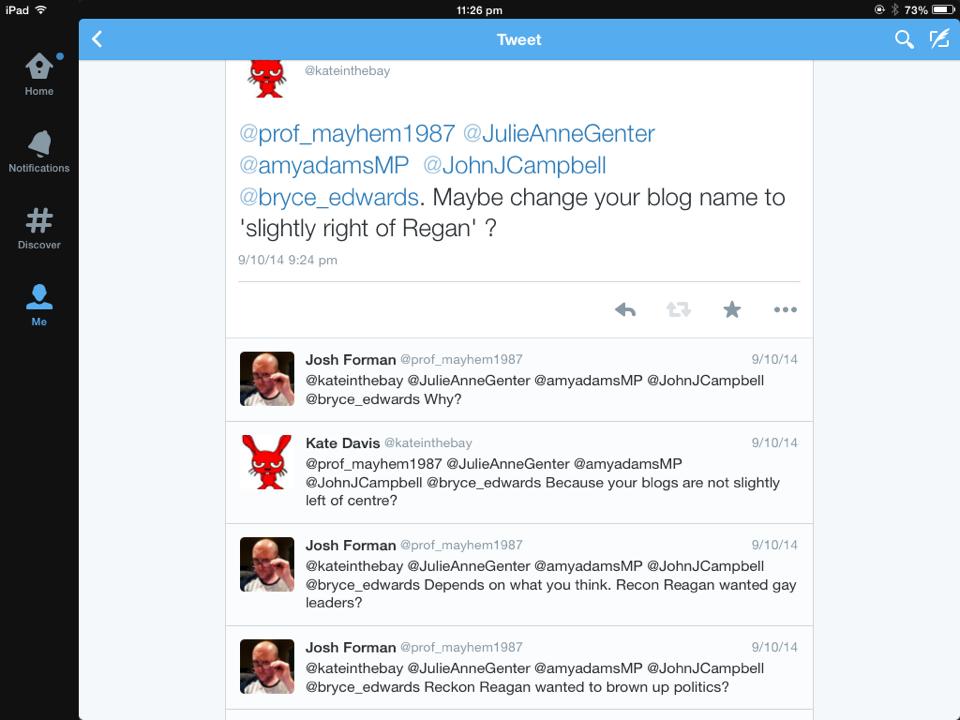 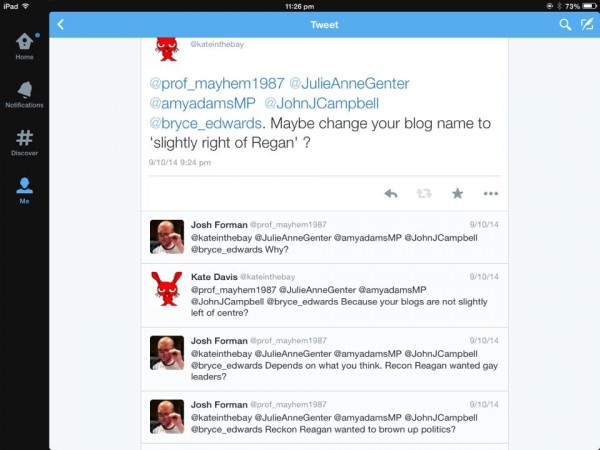 Time to Teach or more people will suffer from P.A.I.D. Political And Intellectual Dysmorphia.I was on the Twitter and a guy followed me so of course I did the polite thing and followed him back. He wrote a blog so again I did the polite thing and a took a look. I’m like that. I hope if I read people’s work and share it if I like it, the same will happen for me. The blog is called Slightly Left of Centre by Josh Forman and as I read I was getting very confused. This blogger could also be a Nat Party speech writer. It appears to be where he gets his material.His blogs promote; feeding the children (because even if it’s because mummy is gambling & daddy is drunk, it’s not their fault) but don’t increase welfare; and he thinks we need a teal coloured party because “you can’t be economically fiscal and hard Left” ; he advocates for longer prisoner sentences; he ….This guy wasn’t left of anything. He thinks Labour lost because it went too far left, ( ? Raising minimum pay those crazy commie MoFos!) he slags The Standard and The Daily Blog and labels all who write for them as the Loony Left. So I tweeted him and said …

‘ You should change your blog to Slightly Right of Reagan’

‘because your blogs aren’t slightly left of centre’

and then he replied

and that is when I realised …we need to be teaching civics or politics or whatever you want to call it in schools. Last week one of Forman’s blogs was picked up by Slater, this week he has started advertising for donations and now I think it is pretty clear the guy is suffering from a pretty common condition called Political And Intellectual Dysmorphia or P.A.I.D. for short. Like people with body dysmorphia they look in the mirror and think they see something that isn’t actually there. In this case Foreman looks in the mirror and thinks he is seeing left wing bias but he has just got his left and right confused. Mirrors can do that to the un-educated. They view things the wrong way around.As a person who is Left enough to want a universal benefit and values fraternity over paternalism, I find this whole situation troubling for two different reasons. The first one being that a couple of weeks ago I was making Labour Leader tweets. One was favourited and retweeted by Matthew Hooton. I immediately stopped tweeting and showered. I felt dirty and used. The thing is I recognised that my own (admittedly witty) words were being used to harm the left. I wasn’t being helpful and I wasn’t contributing positively. I was just giving the other side ammo. Collaborating with the far right is not building a bipartisan position, it is playing into a game where they manipulate the centre further away from anything that could be construed as Left wing. A timely lesson.The second reason is a bit more complex. It is the reason that every election you hear people start to suggest that we need greater education around the political system, engagement, and political theory. The old cry of we need civics taught in school. There seems to be a variety of problems. Of course lack of knowledge as to how they define left from right is just one. What does defines left from right. I once heard Sue Bradford describe it simply as ‘good versus evil’ though I tend to use ‘me versus we’ . Where is the centre and is the centre shifting further right as we speak. This shift that results in bloggers like Forman suggest that Labour moved too far left, when they suggest a wage in minimum pay, or Obama is a communist because he wants to sort out MediCare.(Damn that just introduced a third point which I will note but not address; the Americanisation of our political system)Of course as someone who is just finishing up a BA with a minor in Politics, there are already issues teaching Politics even at a university level. The two main theories discussed in World a Politics are Realism and Liberalism, we ran out of time for Marx and International Conflict is reduced to the study of war and Just War theory. No time for pacifism. We teach people about democracy by telling them to shut up, read the text book and reflect back what you have learnt in the form of two essays to show that you understand what has been taught. Can anyone define counterintuitive? Leaving this issue unattended and making no effort is not going to address the issue. I don’t think leaving it to get better on its own is a viable option. At this point I would be a proponent for any civics education, starting at a primary school. I would advocate that speed is of the essence, while we still have strong teachers unions and before they are undermined by performance pay and charter schools. It’ s too late for Josh but there are other we can save. If I had to put Forman in a box and label it working from his blog and his tweets I would label him right. Even though he wishes to ‘brown up politics’ ( good grief, I struggle to type it but it is a quote) & wants a gay leader he is confusing his social liberalism with what he actually is. A Liberal. He just forgot to capitalise.