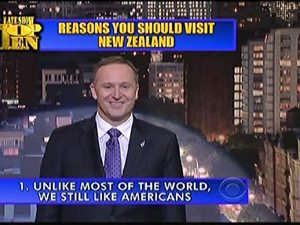 Less than three weeks after the election Prime Minister John Key wants New Zealand to join a war in the Middle East and extend the powers of our US-focused spy agencies the SIS (Security Intelligence Service) and the GCSB (Government Communications Security Bureau) to control the movement of New Zealand citizens travelling overseas.

Both these moves should have been shadowed during the election campaign but Key deliberately chose to downplay the issues because waging war in a country on the other side of the world is something many, and possibly most, New Zealanders are suspicious of.

To get public support for his plans Key must first create fear in the hearts of New Zealanders because a fearful public is a manipulable public. It’s the same old recipe used by warmongers from time immemorial.

Key began the process last week and later this month will ramp up and amplify the “threat” to New Zealand from New Zealanders going overseas to fight and then returning to wage terror attacks here. In reality the risks for New Zealand are somewhere between minor and insignificant and easily contained by vigilance from our police force.

The real reason Key wants to send troops to Iraq, extend mass surveillance and restrict the rights of New Zealanders is to appease the US and ensure we are seen as reliable partners in America’s global objectives – military, political and corporate.

It’s certainly nothing to do with the welfare of Middle Eastern citizens. If this was about protecting civilians the New Zealand government would have spoken out and stopped New Zealanders travelling to fight in the Israeli Army. Instead we not only let them freely travel to fight for a racist, Zionist state but we positively welcome Israeli soldiers, fresh from the killing fields of Gaza, with visa-free travel to New Zealand. We have even allowed the likes of Israeli General Moshe Ya’alon to be welcomed here despite overwhelming evidence of his involvement in the most egregious war crimes against United Nations peacekeepers and Palestinian and Lebanese civilians.

I’m not holding a candle for ISIS whose members have engaged in brutal, oppressive behaviour as bad as anything Saddam Hussein or George Bush approved. But the rise of ISIS and similar groups across the Middle East is directly related to US foreign policy and the decision to invade Iraq in 2003 on the phony premise of weapons of mass destruction when the real objective was to open up more of the Middle East to US corporations, the oil industry in particular.

Back in early 2003 National Party MPs (with the exception of Maurice Williamson) were chomping at the bit to have New Zealand join the George Bush/Tony Blair invasion of Iraq. They were gutted not to have the chance to show the US our soldiers could kill Iraqis as well as any other US ally.

Prime Minister Helen Clark however kept New Zealand out of that war and the US-led invasion and occupation was just as highly unpopular amongst the public here as it was anywhere in the world. The result was the biggest mass mobilisation of humanity against a war that the world had ever seen.

It won’t be the Prime Minister or government MPs that speak out against this war – it will have to be ordinary New Zealanders marching in the streets.